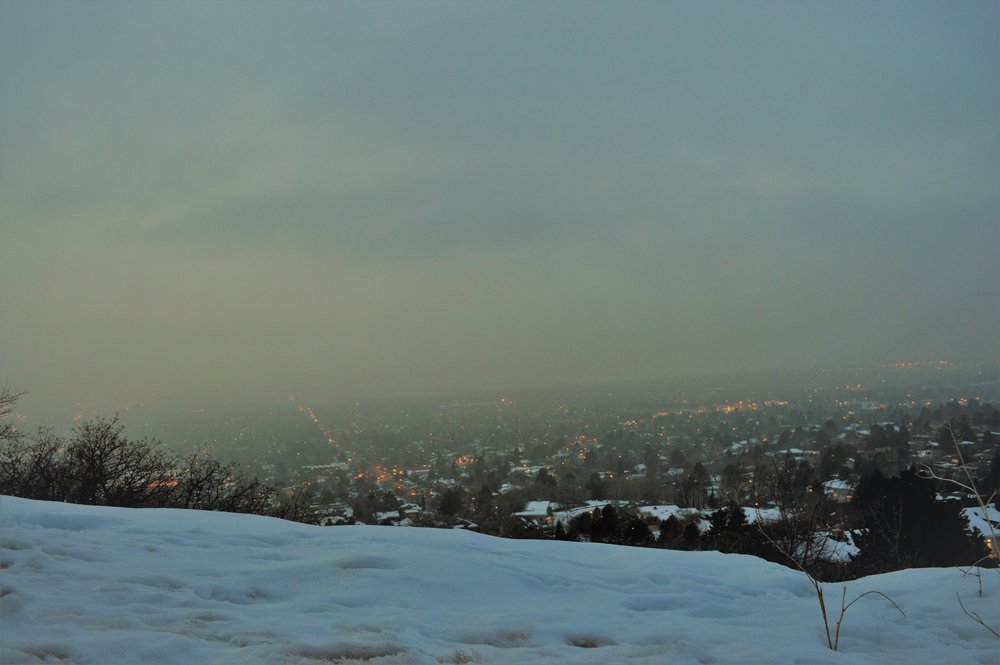 Inversion traps fog and pollutants over Ogden, Utah in early February. Over 20 days in 2017 have had an Air Quality Index (AQI) of moderate, or “unhealthy for sensitive groups” (USG), according to the Environmental Protection Agency’s website. Photo by Mauri Martinez.

Salt Lake City had the nation’s worst air quality at the end of January, according to the Environmental Protection Agency’s AirNow.gov. Poor air can become dangerous for at-risk groups, including athletes who practice outside, and coaches at Westminster College said air quality sometimes affects the way they structure practices.

Mason Goodhand, head coach of the men’s lacrosse team, said he tries to keep his athletes indoors and away from the pollution when the air is bad.

“We cut back on our cardio workouts on red days,” Goodhand said. “When [the inversion] is really bad, we do indoor practice.”

“I try to keep [the team] indoors to train, or advise them to get their long runs done above the inversion,” Quinn said. “We also go to the Olympic Oval in Kearns to train indoors.”

Athletes who train outside on bad inversion days may experience serious health consequences in the future, according to UCAIR, a Utah clean air initiative.

Westminster’s men’s lacrosse team practices outside on Dumke Field on a clean air day. “We cut back on our cardio workouts on red days,” said Mason Goodhand, the team’s head coach. “When [the inversion] is really bad, we do indoor practice.” Photo by Mauri Martinez.

The inversion itself isn’t dangerous, but pollutants that become trapped in the Salt Lake Valley air can be. An inversion occurs when warmer air at higher altitudes traps cooler air and pollutants at the surface. It becomes most severe in the winter and occurs more frequently than in the summer. If the weather is right, the polluted air doesn’t get trapped, providing relief from the bad air days.

Conner McFarlane, a junior neuroscience major from California, plays for Westminster’s lacrosse team and said he is concerned about the negative impact the inversion has on his health.

“For the most part, the biggest issue is that I have asthma and if I don’t stay on top of my medicines, the risk for me to have issues goes way up, especially when I am doing activities related to lacrosse,” he wrote in a message. “In terms of my routines, there are actual days when the inversion is so bad that we have to practice inside. On the days it is there and we practice outside, the whole team feels it and we can’t perform at our best.”

According to the Environmental Protection Agency’s website, there have been over 20 days so far in 2017 where the Air Quality Index (AQI) was either moderate, or “unhealthy for sensitive groups” (USG) for the entire day. There’s also been at least one “red air day,” meaning the air is unhealthy for everyone. On these red air days, the Utah Department of Environmental Quality advises all people to reduce prolonged outdoor activity. On moderate or USG days, they recommend people with sensitive lungs limit their time outside.

“The masks we have are used for fluid precautions,” Nagata said. “General face masks don’t help for protecting; you need a specialized face mask to filter out the pollution.”

Specialized pollution filtering masks, which are similar to gas masks, can be bought online.

Though students and athletes can escape the inversion by using specialized face masks and limiting time spent outside, the only true way to escape inversion is by eliminating pollution.

Lawmakers have instituted small changes in policy, like Salt Lake City’s idle free ordinance, and there are several bills under consideration in this year’s Legislature looking to improve the air. However, most people agree that for a lasting impact, there need to be bigger changes that affect larger populations.