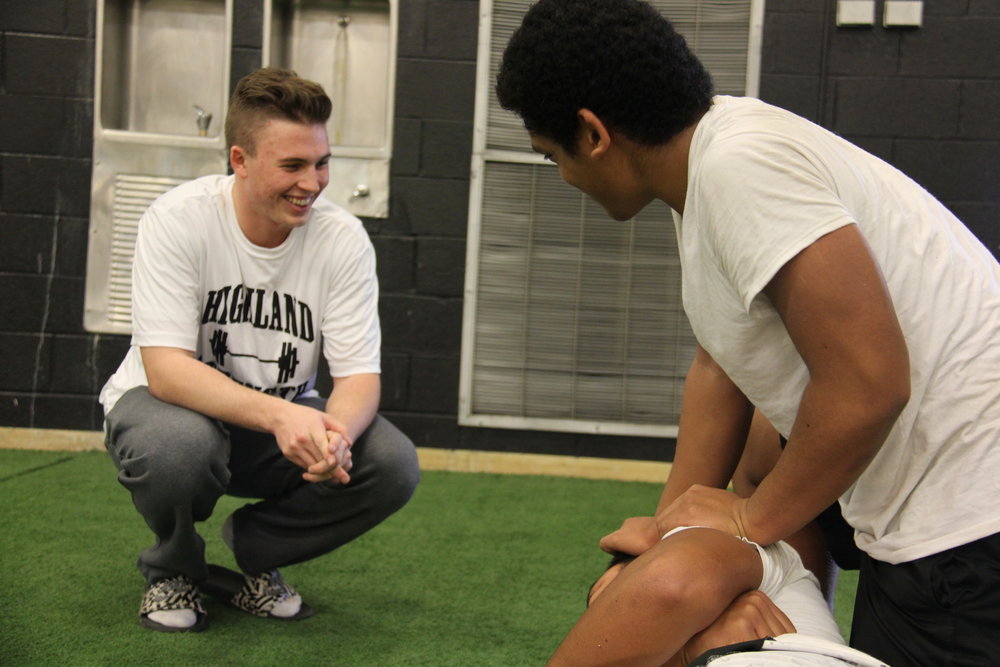 Ryzen Benson, a junior bio-medical and translational research major, leads the Highland High School football team in a stretching session. Benson has been coaching at Highland for two years, which he said makes it easier to cope with not playing football anymore. Photo by Bre Empey.

Ryzen Benson, a junior bio-medical and translational research major, has more on his brain than the average student. Aside from attending classes, Benson coaches Highland High School’s football team where he began studying sports-related concussions.

Benson has been coaching the Highland Rams for two years now.

“He came in and started looking at how we developed athletes and his curiosity went to a whole other level,” said Ed Lloyd, Highland’s strength and conditioning coach.

While coaching football at Highland, Benson took a special interest in concussions and how to prevent them. He started to study and gather information about concussions and preventative methods.

Public health professor John Contreras, is one of the professors Benson worked with to formulate his research.

“Ryzen is an excellent student,” Contreras said. “He likes challenges. He lives for challenges specifically in science, data collection and micro biology. He loves that field, and he’s going to excel because he has a deep passion for it and he doesn’t let barriers stand in his way.”

Benson’s research landed him an invitation to a conference where he presented his findings to the National Football League.

“He went to the pro bowl,” Contreras said. “How many students at an undergraduate level get to do that? Not many.”

Benson played football all four years of high school and said now that he’s a coach he understands how important it is to prevent traumatic head injuries. He sat down with The Forum to discuss his research and his experience presenting to the NFL.

Junior bio-medical and translational research major Ryzen Benson instructs his team at Highland High School during a stretching session. According to Benson’s research, players who do neck exercises regularly are five times less likely to suffer a concussion. Photo by Bre Empey.

Q: Tell me about your research related to concussions.

A: I was in a player parent meeting when one of our strength and conditioning coaches started talking about these neck exercises that we’ve been doing the last couple years at Highland and how we’ve seen our concussion rates going down each year. These exercises help prevent concussions, and that really seemed interesting to me. So, using journal databases and what not, I looked it up, and for the high school level there were no studies done on it. There were no numbers to support this statement. I said to myself, “I want to quantify this and be the one that shows, yes, these really do help,” because how do you convince 150 parents that their child isn’t going to get a concussion when you don’t have any numbers to support it? I want to be the first person to quantify that.

Q: How did you conduct your research?

A: I took two populations. I had five schools in the study and I took the total number of athletes in each of those schools plus how many concussions they had for the total year in 2015, because I did the study starting in the summer of 2016. And I’m still finishing it up as far as publication goes, so I had to go off the season before. I took those total numbers and then I gave a survey to players who filled out a consent form and then I ran a statistical test using the numbers I gathered. With that statistical test, it came out that teens that didn’t do these neck exercises were five times more likely to suffer a concussion, which was huge. I also found that players who are smaller, don’t weigh as much or are shorter—as well as players who play high-risk positions in football—are more likely to suffer concussions.

Q: Can you tell me about some of the neck exercises you have your players do?

A: Normally you would have two people. One person gets on their hands and knees while the other player will put their hand on top of the first player’s head and push down, so there is constant resistance throughout the whole exercise. They will repeat that 10 times in four sets. For the next one, they lay on their back and push their head forward with added resistance from another player. Holding weight on your forehead and then moving your head back and forth also works. There really isn’t a right way, it’s more just that you’re doing the exercises often—every one to two weeks—and that you’re having constant weight or resistance while you’re doing it.

Q: Do you think these neck exercises could be beneficial for other sports teams?

A: Definitely. Especially for women’s soccer and cheerleading. In women’s soccer, every time you head the ball that’s a sub-concussive blow. Numbers wise, football has the most concussions, just because you have 65 to 70 players on a team. But as far as percentage goes, women’s soccer and cheerleading have the highest rates. At Highland, we are trying to get other coaches to practice these exercises and now that we have data on this we can show them this is important.

Q: Why do you think concussion research is so important?

A: Concussions are arguably the biggest issue in football. People aren’t letting their kids play because they don’t want them suffering concussions. The whole basis of this is if you are strengthening those neck muscles around all areas when you’re getting hit, or you’re exerting force on a ball, or somebody is tackling you, when your head moves your neck muscles are stronger so they can hold your head a little more in place. That way you’re not getting as much of a whiplash effect, so your brain’s not moving as much. I think it’s pretty common sense, but it’s crazy that it hasn’t been done yet.

Q: Tell me about your experience bringing your research to the NFL.

A: Hitachi Life Systems, the NFL Players Association and the Living Heart Foundation came together to hold this symposium about head injuries and prevention. They held it at University of Central Florida and invited out a couple MDs, some lawyers and PhDs from all over the country and then there was me. It was a three-hour symposium and what happened was they invited about 70 retired NFL players who got screened when they arrived, doing MRIs and what not. That was an incentive to get people to come in and check out what we had to offer. I was able to meet some of these old players, and it was a really cool experience.

Q: What’s your favorite part about being a high school football coach?

A: It’s kind of an easy way to cope with not playing anymore. I got recruited to play football, but I was kind of over it. I’m not going to the NFL, so I figured I might as well focus on school. I get to help make a good high school experience for the younger guys.