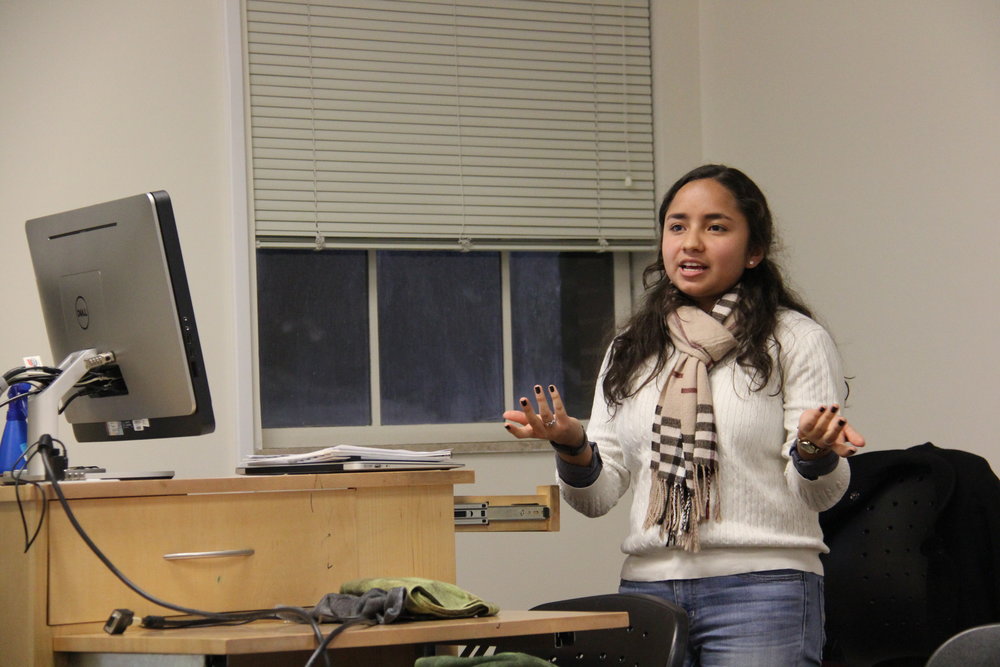 Gabriella Sanchez, a sophomore international business major, presents her declaration concerning religious and cultural holiday observance at an ASW Senate meeting on Jan. 23. The proposed policy is the first of its kind on Westminster’s campus. Photo by Bre Empey.

ASW passed a declaration concerning religious and cultural holiday observance at its Senate meeting on Jan. 23.

The declaration, presented by sophomore international business major Gabriella Sanchez, gives professors and students a standard for absences on religious and/or cultural holidays that are not observed on the college’s academic calendar.

“During my freshman year ethics class—of all classes, right?—I let the teacher know I was going to be having to miss a class for Yom Kippur, the Jewish day of mourning,” Weisgal said.

Rosh Hashanah and Yom Kippur are two major holidays in the Jewish religion known as the High Holy Days. On these days, many members of the Jewish faith don’t work.

“I let the professor know that I would be missing class and she replied that I would miss a quiz, which I’d have to take a zero on. And she chuckled and said, ‘So I hope you enjoy your holiday!'” Weisgal remembered. “I was kind of stunned, but I talked to her again after and confirmed I couldn’t make up the points missed from that day even though it was a religious observance. I ended up reporting the incident to the school and was told my first step was to meet with an interim dean of some department.”

Because there was no policy in place, many students didn’t know where to go or what to do if an incident like Weisgal’s occurred.

“I had spent more time than the actual class period I missed trying to earn the points back, so I resigned to losing the points,” she said.

Members of ASW said they hope the new policy will help clear up some of the confusion and uncertainty surrounding student observance of religious holidays.

“The main point of the policy is to develop a way the faculty can communicate to students about this and for students to know how to address it when bringing it up with faculty, as well as to have a standard that is respectful to all,” Sanchez said.

The policy requires students who plan on missing class to observe a religious and/or cultural holiday to inform their professors within the first two weeks of the semester.

If the students provide the necessary information within those first two weeks, professors are required to work with students to the best of their ability to ensure the student can complete all course work without conflict, according to ASW’s policy.

“I think this is important because Westminster as a whole has done a lot of talking about diversity and inclusion on campus and we’ve made a big point to make that important and we haven’t addressed religious inclusion and cultural holidays,” Sanchez said.

”I understand that different students have different needs and that this is part of our diversity and inclusion here at Westminster,” Saaed said. “This policy will really help us all learn and grow, respect one another, respect the diversity of one another and also [show us] how to look at policy as something that we should follow.”

Saeed said she hasn’t had many students come to her about missing class for a religious holiday but said no one should have to.

Alex Frol, a junior biology major, is also Jewish and said Jewish holidays can conflict heavily with the academic calendar depending on the year.

“It’s kind of difficult because you’re like, ‘I really want to be religiously observant, but I also don’t want to miss class because I’m paying a lot of money and it’s important,'” Frol said.

Frol said she tries not to miss class as often as possible, even for holidays.

“Personally, for me, it’s a balance of what holidays are super important for me that I am okay missing class for,” Frol said. “I should really be in class and I’m prioritizing it over my religion.”

Dana Tumpowsky, executive director of Hillel for Utah, said having the policy supports a recognition of diversity.

“Westminster’s the kind of place where there’s a lot of communication and collaboration between students and their faculty members, and I think that kind of working together has always been in existence, but it’s really nice to have it down as a policy,” she said.

The new policy will be the first of its kind on Westminster’s campus.

“I think the fact that this policy is coming into place and the students are bringing it up, I think it is fantastic,” Saeed said.

The policy will be effective beginning the Fall 2017 semester.