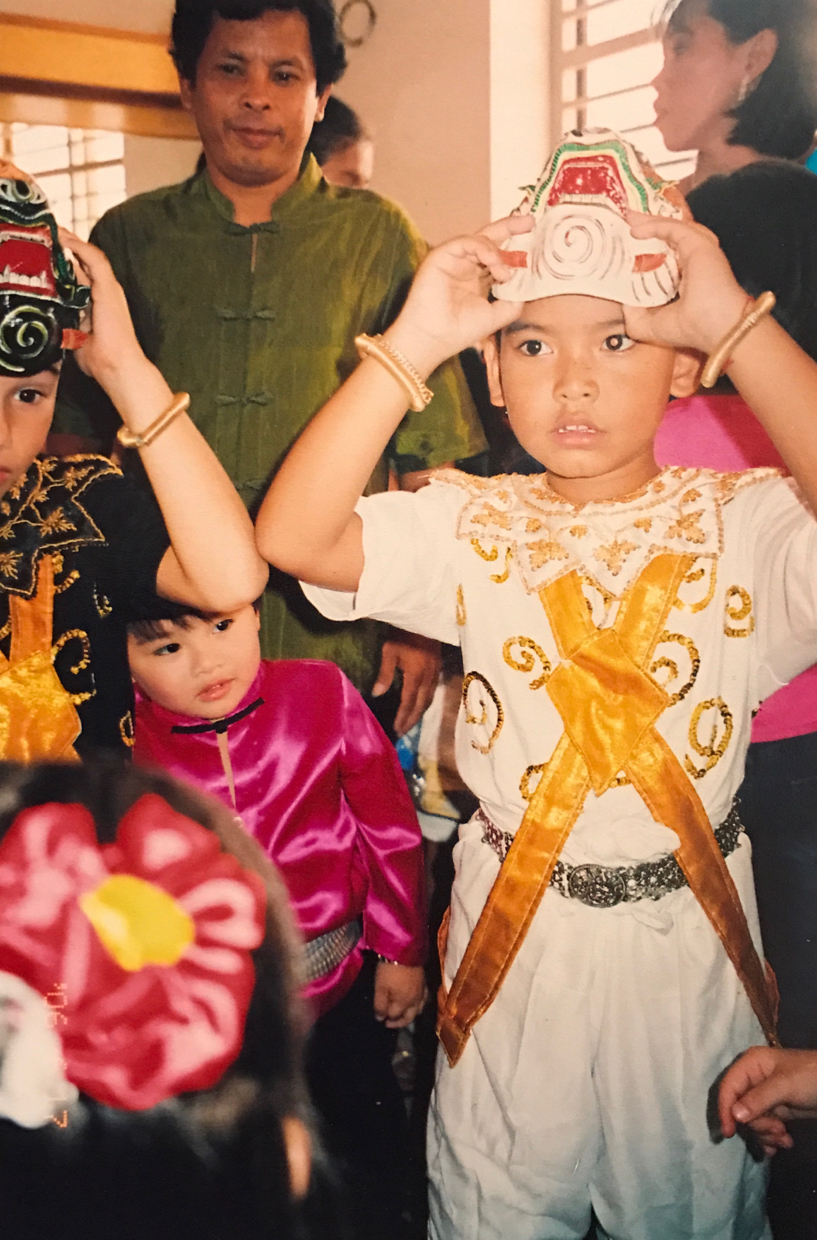 ASW President Ben Pok, age 9, gets ready backstage to perform for His Majesty the Father King of Cambodia at La Salle de Conférence Chaktomuk, a prestigious venue reserved for the Royal Family and official government events. Growing up in Cambodia, Pok said he has grown comfortable switching between cultural norms—a phenomenon known as code switching. Photo courtesy of Ben Pok.

Ben sat down with the Cambodian prince and crossed his legs. Each time the prince spoke, Ben responded back, sometimes with a question or counter statement. His friend, sitting in the next seat, leaned over and whispered, “Dude, what the hell is going on? This is not okay.”

Though crossed legs and conversational responses are not considered inappropriate behavior in the United States, different cultures have different standards for conduct—presenting challenges for students who are part of multiple cultures. In this case, Westminster ASW President Ben Pok didn’t switch back to the norms of his home culture while in Phnom Penh, Cambodia two summers ago—a phenomenon known as code switching.

“Code switching is the alternating between two or more languages,” said Dr. Tamara Stevenson, a communication professor at Westminster College. “Other applications of code switching can apply to dress [or] presentation, depending on the environments or atmospheres that you are going between.”

Switching between two different languages and cultures isn’t easy, said Pok, and being an international student at a private American college poses many other challenges.

Ben Pok, 13 years old, receives a Medal of Honor from Her Majesty the Mother Queen in the Royal Residence, located in the Royal Palace. If Pok was receiving an honor in the U.S., he would likely be on a stage shaking hands with the presenter, but in Cambodian culture he has to bow down, hold his palms together and avoid eye contact. Photo courtesy of Ben Pok.

“I think the one year of high school [I spent] in the U.S. really helped me acclimate to U.S. culture and it definitely makes it easier to lead,” Pok said. “Are there instances where people sometimes look down or say some slightly offensive things about me and my ability to lead? Yes. Because, you know, I’m young and I’m not white.”

Alison Vasquez, director of international student services and study abroad, said the college still has some work to do with promoting diversity and inclusion on campus.

“Westminster can still work on increasing diversity,” she said. “I think that’s essential and it’s hard to get rid of your prejudices if you’ve never interacted with people who are different from yourself.”

Pok said he pictured his college experience as sitting in the grass with his multiracial friends, but said that description doesn’t match his time at Westminster.

“The cultural barriers aren’t as prominent as I thought they would be,” Pok said. “When I was running for [ASW] president last year, a lot of people questioned my ability to serve—especially because I was 17 years old and I had only been in the states for two years. The only thing I wanted to do then was prove them wrong.”

Pok said he holds fast to the culture he grew up with, which often contradicts his responsibilities as president—including representing the interests of the study body in meetings with college administration.

“I had to get used to it,” he said. “In my culture, when you talk to a person who is older or higher in ranking than you, you don’t question them; you respect them. It isn’t a back and forth debate. You sit there and avoid eye contact.”

Pok said there are still times when he wonders if he should say something or if he maybe went too far, but he said it helps him to think about the people who voted for him and how they would want him to speak up. So he does.

“When you build community in your classroom, students are more open to different perspectives, experiences and backgrounds,” Stevenson said. “Everyone [is] more exposed and informed to the different ways people live and exist and learn.”

Stevenson said many people engage in code switching to ease into environments different from their own, to avoid drawing attention to themselves or to build a sense of belonging.

“You’re demonstrating that you can and do belong in that space,” she said.

Though code switching can be difficult for students from different cultures, Vasquez said having a wide range of individuals from different backgrounds allows people on campus to learn more about other cultures.

“That’s how we create good relationships with people from around the world is by better understanding who they are and where they come from,” Vasquez said. “If you’ve never interacted with somebody from another country, then your assumptions and stereotypes are all you have.”

Pok said he now works to share his upbringing with the campus that elected him.

“I wanted to make a difference, not for my sake but for the betterment of the student body,” Pok said. “I ran the first term because I truly believed there was nobody else that would pour in the same amount of effort I would.”