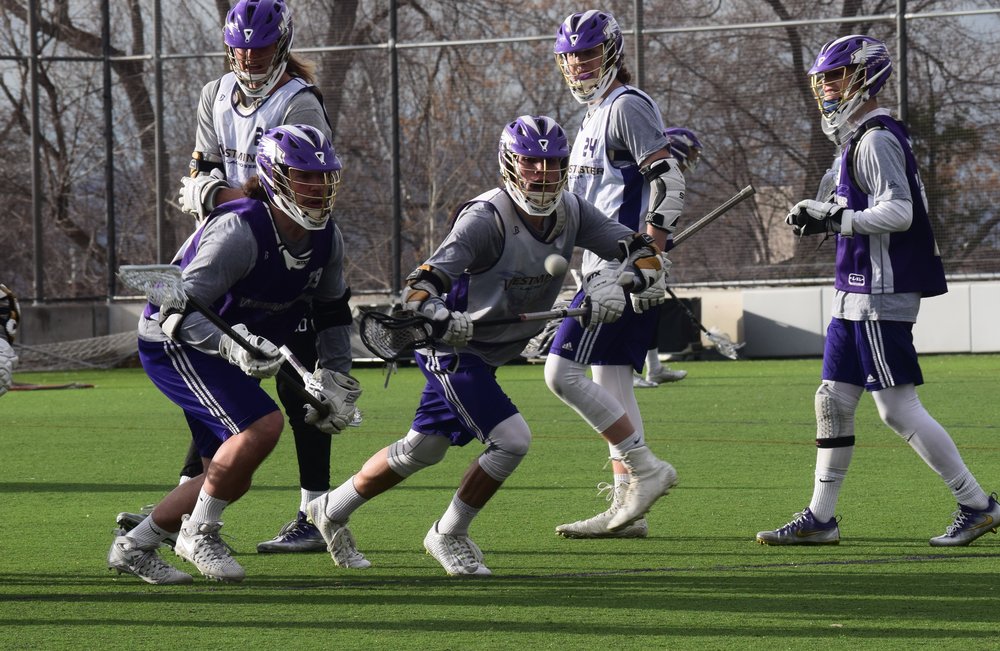 Alex Dooley, a junior communication major, trains with his teammates during lacrosse practice at Dumke Field on Feb. 20. Dooley said the team is prepared to match up with bigger and stronger teams as it transitions into NCAA Division II. Photo by Dariia Miroshnikova.

Westminster College’s men’s lacrosse team was Utah’s first-ever club to become affiliated with the NCAA Division II. Since then, the new requirements have led to adjustments in the program to better prepare the athletes for competition against bigger and stronger teams.

“I think it’s really exciting because it shows that our growth is just substantial,” said Alex Dooley, a junior communication major who has played on the team for three years. “We are finally going NCAA, and it means that we are good enough. It shows that we have the talent and the commitment to go NCAA and we’re too big for a club and grew out of it.”

Mason Goodhand, head coach of Westminster’s lacrosse team, said members of the team have had to push themselves harder to become both physically and mentally ready to play in a higher league, where he said the “seriousness of the competition and the athleticism of the opponent” are on a different level.

“Everything about our program has changed because the NCAA requires a great deal of administrative oversight that requires me to regulate how many hours my guys are doing things by the week [and] by the month,” he said. “It regulates when [and where] I can talk to high school kids and when I can’t. We hired somebody in the athletic department just to train and monitor coaches so that we stay within the guidelines of the NCAA.”

The athletes said the biggest changes they’ve seen so far are with travel schedules and more intense training.

“We’ve had to step up our game a lot,” said Conner McFarlane, a junior neuroscience major who’s played on the team for three years. “The expectations are a little higher for individual performance and you definitely strive to meet a standard. There’s obviously a team standard where we want to be at [and] there [are] also personal goals that we are encouraged to set for ourselves and play into the system that we’ve developed.”

Despite the stricter rules, the program has become more appealing to prospective athletes because the team is now affiliated with the NCAA, Goodhand said.

“As an NCAA program we get more players interested in coming here, so I think that once we entered the league we already [were] set up in a positon to perform well against our opponents,” McFarlane said. “I think we’re meeting the challenge. [It’s] more of an opportunity to really improve the program.”

As challenging as it is to play in NCAA Division II, the athletes said they are ready and look forward to competing.

The team will begin its season March 4 against Rockhurst University.