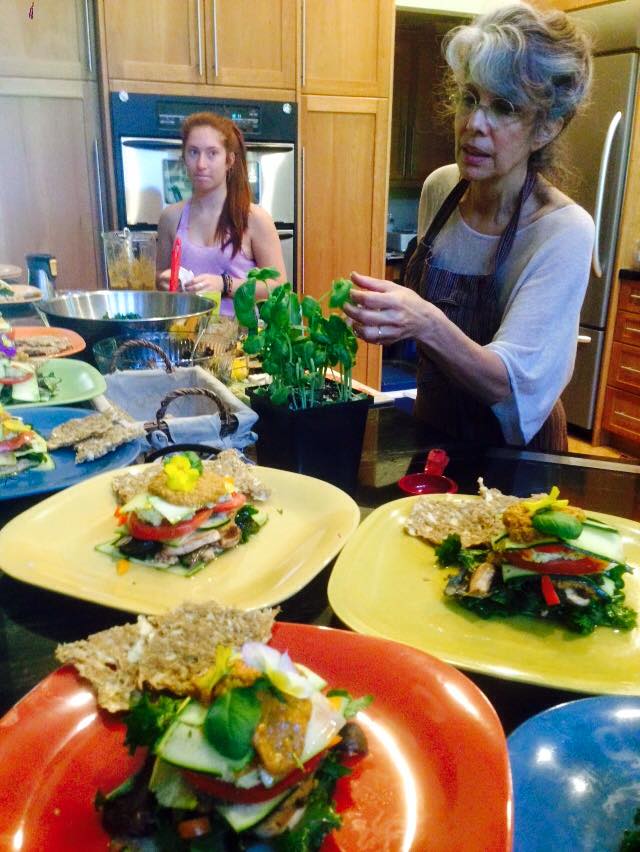 Nina Vought, associate professor of theatre and chair of the dance program, cooks a vegan dish for her May Term class in 2016. Nina and her husband Michael teach their “Vegan Revolution” and “Ecological Eating” classes from their home. Photo by Casie Peterson.

Westminster College professors Nina and Michael Vought have made a widespread impact on campus, spurring a “vegan revolution” for many of their students.

During May Term, Nina Vought, associate professor of theatre and chair of the dance program, co-teaches the “Vegan Revolution” and “Ecological Eating” classes with her husband, theatre professor Michael Vought.

The classes are taught in the Vought’s home and are designed to help students make educated decisions about their food consumption year round.

“Once you try going vegan and you notice how good you feel [and] how much more energy you have, your soul just feels a little bit better,” Nina said. “Those kinds of things. You begin to seek those things out.”

Nina said she and Michael decided to co-create the classes seven years ago after curious students requested courses on veganism.

“This class is not about you becoming vegan,” Nina said. “I’m not trying to convince you. I’m trying to let you know what the information is.”

Nina said she works closely with Bon Appétit, Westminster’s food provider, to improve plant-based food options at the college. However, she said she feels like she’s made little headway.

“I’m not their target audience,” Nina said. “It’s only when students want and demand change that change will happen.”

Ryan Leonard, general manager of Bon Appétit, said it’s difficult to please everyone, but he challenges his chef to always have a vegan alternative.

Leonard said the Voughts have been a great resource to Bon Appétit and he often reaches out to them for event menu suggestions.

“It’s very, very important, and I don’t think it’s a matter of just trending right now,” Leonard said. “I think it’s a lifestyle choice for people that we need to take seriously.”

Behind the scenes in the kitchen at the Shaw Student Center, workers at Bon Appétit cook every meal from scratch. Ryan Leonard, general manager of Bon Appétit, said he always challenges his chef to have a vegan alternative. Photo by Casie Peterson.

Sierra DuCharme-Hansen, a junior theatre major, took the Vought’s class and said she thinks change can be difficult for Bon Appétit.

“It’s hard when you’ve already paid them the money,” DuCharme-Hansen said about Westminster’s meal plans. “You pay them all the money at the beginning and expect change when you can’t really hold the money over them.”

Bon Appétit has hosted Food Forums to generate student input on its menu and other business practices. Bon Appétit also employs a comment card system for students who want to see change, which past reporting from The Forum found was successful. In Fall 2017, Bon Appétit began offering halal meat options after The Forum ran an article about one student’s struggle to find food that fit his religious needs.

DuCharme-Hansen said she hopes Bon Appétit will add more vegan alternatives. However, she said she understands not everyone has the desire to consume them, which limits Bon Appétit’s options.

Although there is a demand for plant-based options on campus, many students are unfamiliar with vegan culture altogether, which is where the Voughts come in.

“We invite skeptics,” Nina said. “I think that skeptics make the class more interesting because there is so much we can research. It’s all at the tip of [our] fingers.”