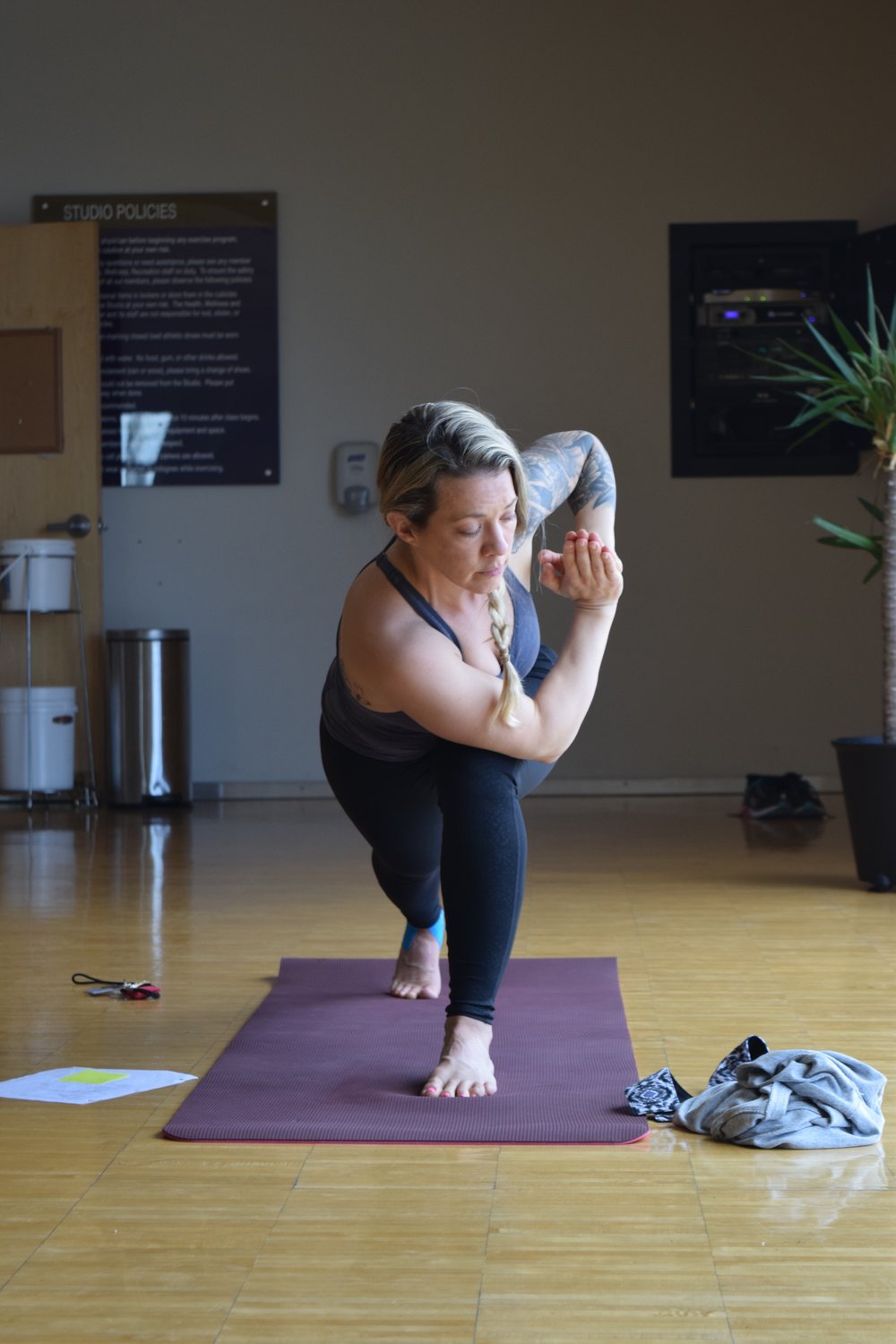 Laura Iverson, the assistant director of fitness, wellness, and recreation at Westminster College, practices yoga in the Health, Wellness and Athletic Center. The college offers yoga to students, faculty and staff year-round and incorporates a variety of techniques and principles such as breathing exercises, poses and meditation. Photo by Stephanie Brown-Richards.

Though yoga has become widely used for its rehabilitative qualities, some have raised questions of whether American culture has evolved the practice from its more traditional origins. However, Westminster College yoga professors said they acknowledge the history of the practice in their classes and attempt to engage their students in a connection with the mind, body and spirit.

“I think a lot of people aren’t aware of where yoga comes from, and so it can be misconstrued and become a cliché thing,” said Alexia Cooper, a 22-year old environmental science major at Westminster College. “It can be transformed if you get insight and aren’t ignorant. I think that helps with cultural appropriation—at least if you’re aware of its origins.”

Cultural appropriation is defined as the adoption or use of the elements of one culture by members of another culture. Though yoga has its roots in Indian, it became popular in America during the late 1970s and ’80s when celebrities began practicing and endorsing it.

Cooper said she has recently used yoga to help her recover from two ACL surgeries, which has provided her with both a stress reliever and low-impact workout.

Alexa Cooper (center) is a 22-year-old environmental science major who said she uses yoga to rehabilitate from two ACL surgeries. She said yoga acts a stress reliever during the school year and is a low-impact way to maintain flexibility while she recovers. Photo by Stephanie Brown-Richards.

These goals are common. Many people practice yoga to maintain their health and well-being, improve physical fitness, relieve stress and enhance quality of life, according to the National Center for Complementary and Integrative Health under the U.S. Department of Health and Human Services.

“Yoga means everything,” said Greg Airhart, co-owner of Bikram Yoga SLC. “Finding balance in all aspects of your life—that means mental, emotional, physical [and] spiritual. When you find balance in all that, that’s yoga.”

Before yoga, Airhart said he used to treat his arthritis with addictive pain medication. Now, he said he has seen immense improvement in joint function and is medication free. However, he said many Americans don’t practice yoga in the way it’s meant to be practiced.

“Americans want something easier, quicker and faster,” Airhart said. “They don’t get in the mind, body, soul connection—they get in there to get their exercise in.”

According to the 2007 National Health Interview Survey, yoga is the sixth most commonly used health practice among American adults. The survey results are based on data from 34,525 adults aged 18 and older.

Westminster’s yoga instructors said they want to pass on the “mind, body, soul connection” to their students and stay true to the historical roots of the practice.

“My current definition [of yoga] is the process of understanding who I am through the method of listening,” said Scott Moore, who teaches Yoga for Wellness at Westminster College. “So just listening to my body in a stretch, or listening to my mind in a meditation, or listen[ing] to how my energy is flowing through a breathing process. And for me, that’s what yoga is.”

Moore has been a professional yoga instructor for 16 years. He talks in his class about the value of meditation, how to use techniques like breathing exercises to reduce anxiety and increase energy and how to relax the body. He also discusses the history of yoga and its origins in class.

“The strength of yoga comes in its plasticity and its ability to adapt to the needs of the people practicing it,” Moore said. “This practice was developed by different people, in a different time, by a different culture [and] for different needs. Take the ancient idea of yoga and apply that to a modern context with our needs.”

Maria Johnson, one of the yoga instructors who holds sessions in the Dolores Dore Eccles Health, Wellness and Athletic Center, has taught yoga for 20 years and is a Lululemon ambassador.

The percentage of adults who practice yoga has increased substantially, from 5.1 percent in 2002 to 9.5 percent in 2012.

Moore acknowledged the increase in the practice of yoga in American culture and said it can at times be seen as distasteful by more traditional observers of the practice.

“People are hungry for a guru—for some sort of wise teacher to tell them exactly what to do,” Moore said. “The identity only comes by how you’re able to look within yourself, and no guru or teacher can give you that. You have to find it on your own.”

He went on to say that people can often misunderstand their teacher as the answer. He said ultimately the teacher should be seen as a guide or a map—not the terrain.

“Don’t misunderstand the practice of yoga as the goal,” Moore said. “Let it be just the vehicle.”