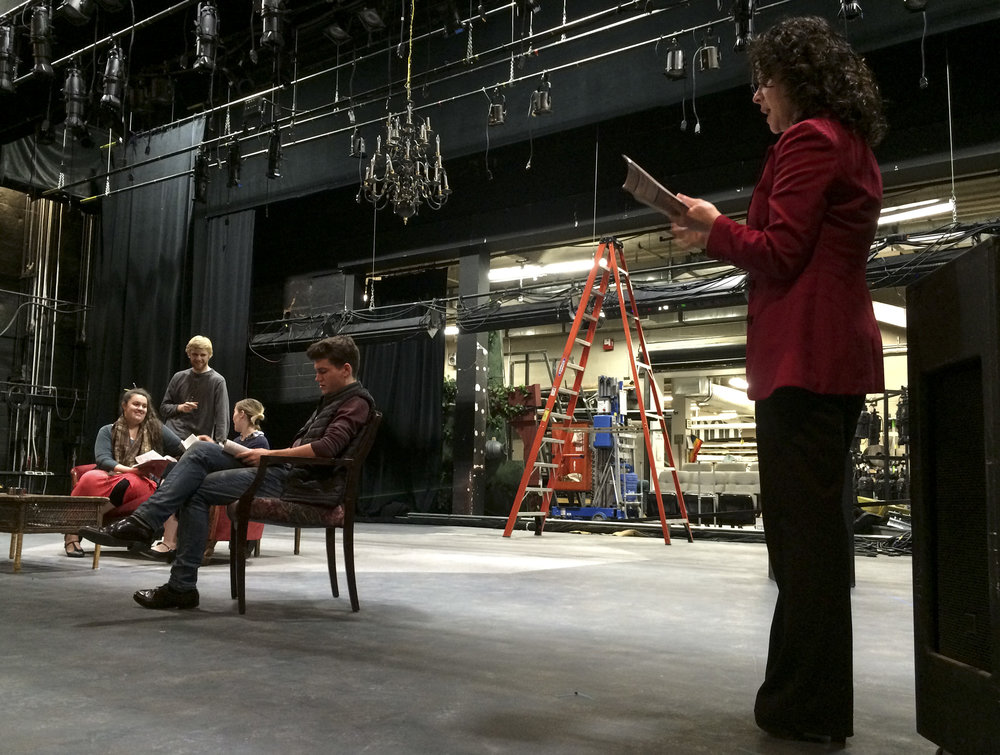 Melanie Nelson, the director of Westminster College’s production of “Blithe Spirit,” and the show’s cast go through the lines of the play. During the rehearsal, everyone—including the director—speaks in Received Pronunciation dialect to get as much practice as they can for the show. Phtoto by Dariia Miroshnikova.

Westminster College theatre students are rehearsing “Blithe Spirit,” a British play by Noel Coward that requires performers to speak in a British dialect. To help their audience experience 1940s England, the actors said they put hours of effort into perfecting their accents.

“[The dialect] introduces a completely new way of saying things,” said Tyler Palo, a theatre major who fills the role of Charles in the play. “It’s almost like a completely different language.”

Learning new dialects is a scientific process that involves research and practice and is essential to the experience of the show, according to Sierra DuCharme-Hansen, a junior theatre major.

The actors take a voice, diction and dialect class where they learn how to write words out phonetically in Standard American dialect, listen to audio and watch videos of people speaking in the dialect. For “Blithe Spirit,” the actors use a dialect called Received Pronunciation (RP).

“You have a list of the sounds that you change,” DuCharme-Hansen said. “Then you go through your script and then you go through how you’ve written it out phonetically. So by the end, as you make all these substitutions, you should be able to just [read it].”

All theatre majors have to take the class at least once, learning dialects like Standard American and RP and moving to American Southern, Cockney and Northern Irish dialects, DuCharme Hansen said.

Jared Larkin, a theatre professor who teaches the class, said it’s important to know the anatomy of the mouth to make the right sounds.

“We hear things differently than the listener does,” he said. “[Students] might even think that they are making [sounds] correctly because they hear one thing, but we hear another. So by understanding the actual anatomy of that sound — where the tongue is being placed, how open the jaw might be, whether it’s forward or backward in the mouth — changes the vowel sound.”

“This class was challenging, but it was very useful for me” said Ruslan Mavlanov, a theatre major from Russia. “It not only taught me many dialects, but also how to speak American [without a Russian accent].”

Mavlanov said mastering dialects was more difficult for him than for other English-speaking students because English is his third language.

However, DuCharme-Hansen said dialect practice takes everyone a lot of time and sometimes requires actors to spend up to eight hours writing sounds out.

To learn the accent faster, actors stay in dialect at all times in rehearsal — even when they talk to each other, said Viviane Thurman, a theatre major at Westminster College.

“What we mostly try to do when we do dialect pieces is from the moment that we’re here — so basically 6 o’clock when our rehearsal starts — we all try to speak in RP,” Thurman said. “If we just dedicate from 6 p.m. to 10 p.m. that we speak in that dialect, it’s easier to not just focus on that when you’re on stage but just kind of make that an everyday go to.”

The actors said the show would have a different feeling without RP.

“I think the feeling of “Blithe Spirit” would be completely different if we were doing it with American dialect instead of RP British,” DuCharme-Hansen said. “It completely takes you out of the world that we’ve tried so hard to create when you have the harshness of the American dialect.”

Cast members said the dialect enhances the performance and helps the audience experience the time and place where the events happen.

“The importance of doing the dialect is just keeping that integrity of the piece and the time that it was written in,” Turman said. “Being respectful to that time and that culture – that is the show.”