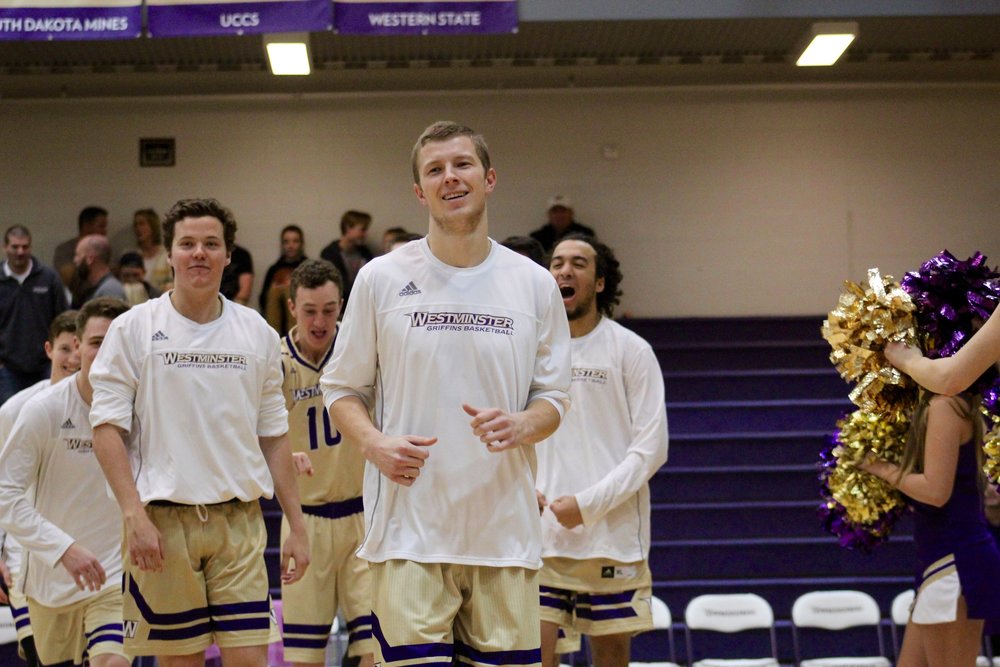 Tanner Newbold, a Westminster College junior, transferred from Salt Lake Community College (SLCC) for his third year of college basketball. After winning a national championship with SLCC, Newbold said he was sold on Westminster “because the education was amazing and I knew the people here were going to be very invested in who I am.” Photo by Marni Harbrecht.

For student athletes transferring from a junior college, juggling the desire to continue playing their sport, finding a college with the education they want and working within eligibility requirements can create scarce options.

“Tanner is an important member of our team,” Parrish said. “He is well respected and is a very good teammate. He can always be counted on to give maximum effort. He is a big time shooter and a pleasure to coach. He accepts his role and understands how important he is.”

After returning home from a mission with The Church of Jesus Christ of Latter-day Saints in Kentucky, Newbold started on the SLCC basketball team, which won the college basketball national championship in Kansas against Hutchison Community College.

“I knew I was going to play college ball,” Newbold said. “But I never really thought it would be a possibility to win a national championship. Obviously, that’s the dream.”

Tanner Newbold, a Westminster College junior, transferred from Salt Lake Community College (SLCC) for his third year of college basketball. After winning a national championship with SLCC, Newbold said he was sold on Westminster “because the education was amazing and I knew the people here were going to be very invested in who I am.” Photo by Marni Harbrecht.

After achieving what seemed to be his biggest dream, his career at SLCC ended last year along with his eligibility to play at a junior college. The Forum sat down with Newbold to talk about the continuation of his college athletics career and what Westminster provided him that other schools didn’t.

Q: Why did you choose Westminster?

A: The way the chips fell were the opportunities came to me that I took. And when it comes to scholarships and getting your education paid for, that’s such a top priority. Especially with such an elite place like Westminster. I was sold because the education was amazing and I knew the people here were going to be very invested in who I am because it is such a small school. I knew my coach very well and there’s a lot of guys on the team who I have really good relationships with who are also LDS. So all around it just felt really good to be here.

Q: How would you explain your experience on Westminster’s basketball team?

A: One thing that I’ve been grateful for throughout all of my playing days in college is that I’ve always been on teams with just a bunch of great guys. I know not every team is like that. I’ve just been super impressed with the quality of teammates on the team here in the fact that they would do anything for me and they really do care about me as a person and teammate. My coaches do, as well. They are invested in us. They want us to do well and they let us know that. Our head coach, Coach Parrish, works his butt off and does everything he can to make sure we’re successful. But obviously not only in sports but in life in general. It helps us understand as a team that basketball is important, but it is also not the most important thing in life and there’s bigger things we can learn through the sport.

Q: You’re LDS. Why did you choose Westminster over a religious school like Brigham Young University?

A: Growing up in here in Utah, the first time I ever really had an outside-of-Utah experience was when I was in Wyoming. Even then, there is a pretty decent LDS population. That was a starter for me to help me realize that the entire world is not like it is here in Utah. I think Westminster has kind of capped on that. Westminster has really helped me gain an understanding of who people are from such a diverse amount of backgrounds in place that you can’t really find that anywhere else in Utah. It’s cool because you get a lot of perspectives that you don’t hear a ton. Obviously with the LDS culture that I’m involved in, I spend a lot of time around people who are of the same faith and grew up in the same kind of relative circumstances. Being here gives you a lot of different insights and angles on different things and makes it really interesting.

Q: What do you hope to take away from your experience on the basketball team and at Westminster overall?

A: I feel like I’ve always been a goal-oriented person. I have dreams and I have things I want to accomplish in my life. I know what I want when it comes to what I value, what I cherish [and] what I care about. Westminster has been a huge help already and I hope to continue to get more out of Westminster to help me reach those goals, whether they be just as a person or regarding a career. Obviously my athletics probably won’t extend past Westminster—kind of a bummer—but I know that Westminster is going to give me so much that’s going to prepare me for my future. I don’t want to just get that paper, that degree, and just move on and find a job. I want to take what I have learned from here and build from here and use that as a propeller to get what I need. Westminster has definitely done that for me.