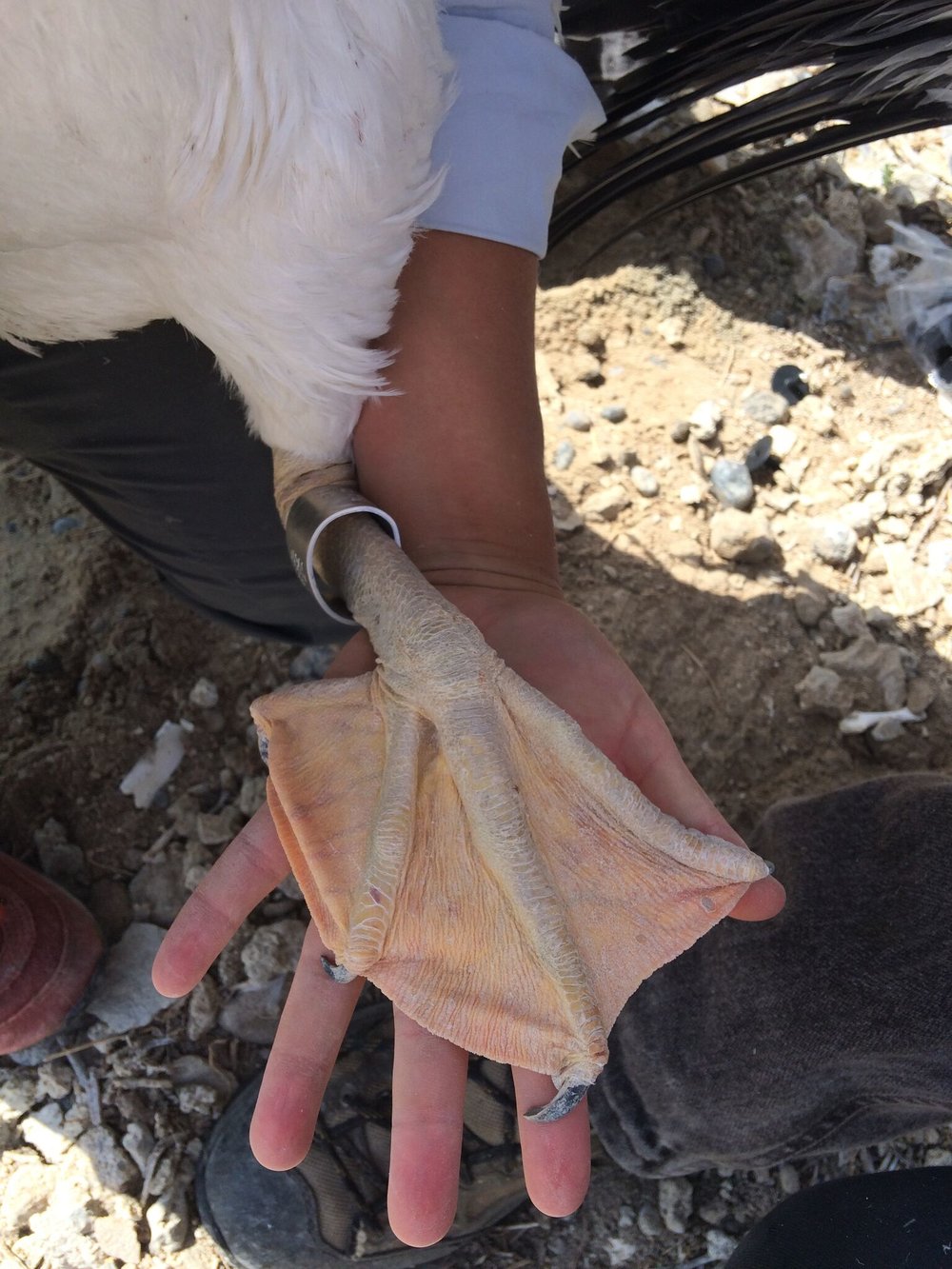 A researcher shows the leg band on an American White Pelican’s foot in the Great Salt Lake. Researchers use GPS backpacks and leg bands to track the birds, which make a necessary stop at The Great Salt Lake every year while on their migratory path to find mates and raise their offspring. Photo by Jaimi Butler.

Though the Great Salt Lake may have a reputation for its bad smell and desolate nature, experts say the lake is crucial for wildlife and the surrounding population—it’s actually teeming with life.

“The lake can be stinky,” said Jaimi Butler, the coordinator for Westminster College’s Great Salt Lake Institute. “But there is no doubt that there is a lot of life in the Great Salt Lake.”

During the summer, the amount of biomass in the brine shrimp that live in the lake equals 1.8 million people, according to Butler.

“Perceptually, the lake is a really weird and interesting body of water,” said Hikmet Loe, an art history professor at Westminster and author of a book about the Spiral Jetty art installation at the Great Salt Lake. “The lake has many different uses. It used to be food and sustenance for Native Americans. Now, it brings $1.8 billion a year in revenue to the state.”

Despite the Great Salt Lake’s importance for biodiversity and the economy, Butler said it’s hard for people to connect with the lake because of its reputation for being strange and having minimal access,

“Sometimes, the lake lives in our imagination,” she said.

One of the reasons the lake is so important to Utah is its abundance of wildlife, according to Jules Jimreivat, a senior biology major at Westminster and one of the directors and producers of The Great Salt Lake Podcast.

“The Great Salt Lake is a really important stop for many different species of migratory birds,” Jimreivat said. “Some of them are traveling as far as from South America to North America. They need a good place to stop and rest and have abundant food sources.”

Brine shrimp in the Great Salt Lake attracts over half the world’s population of eared grebes to the area every summer. These small birds feed almost exclusively on brine shrimp, according to Butler.

Eared grebes aren’t the only birds to pass through the Great Salt Lake on their migratory path. According to Butler, the American White Pelican also makes a stop at the lake. The American

“The birds make a compromise by living far away from food, fresh water and typically predators,” Butler said. “The birds have to fly 30 miles to go and capture food—mostly in the Bear River Bird Refuge—and then they fly back and feed their young.”

Until recently, Butler said the pelicans had no natural predators on Gunnison Island. However, low water levels created a land bridge and allowed a coyote to find its way into the pelican breeding ground.

“This island is the second-largest breeding population in North America,” Butler said. “There are around 10,000 to 15,000 breeding pelicans on the island. It’s a very important place for their population.”

Bird aren’t the only species affected by low water levels. Humans on the Wasatch Front could also experience negative side effects.

American White Pelican flocks make the stop at The Great Salt Lake every year while on their migratory path to find mates and raise their offspring. A flock of American White Pelicans on the lake’s Gunnison Island can fly 60 miles round trip to feed their young because there isn’t closer access to food. Photo by Jaimi Butler.

“A big issue is dust,” Jimreivat said. “When the lake levels are low there is potential for the lake bed to become airborne [because it is not covered by water], and that puts a bunch of small particles in the air. That’s bad for us to breathe. It’s bad for other organisms to breathe and it adds to the bad air pollution problems that we have in the valley.”

Butler said the Great Salt Lake is shallow, which exposes far more of its lake bed than most deeper lakes.

The low water levels could also impact snowfall. The Wasatch Mountains receive 5 to 12 percent of their annual snowfall from lake-effect snow.

“Lowering the lake could potentially shrink that portion of snowfall that’s going into our canyons,” Butler said.

The Great Salt Lake is a terminal lake, meaning it is the end of the water cycle. All water enters the lake from three rivers—the Bear River, the Jordan River and the Weber River. Water from these lakes is often prioritized for reservoirs first and the Salt Lake second, according to Butler.

“Typically, people think that water that is let into a salt lake is wasted,” Butler said. “Historically, we have let a lot of salt basins dry up. One example is Owens Lake in California. Essentially, they spend billions of dollars mitigating dust storms off the lake and have human health effects that have [been] shown to be detrimental to people.”

The importance of the lake can often be overlooked because of its lack of fresh water, Butler said, but the lake is an integral part of the Salt Lake City community.

“This is not an unknown,” Butler said. “If we let the Great Salt Lake dry up there [are] going to be repercussions.”