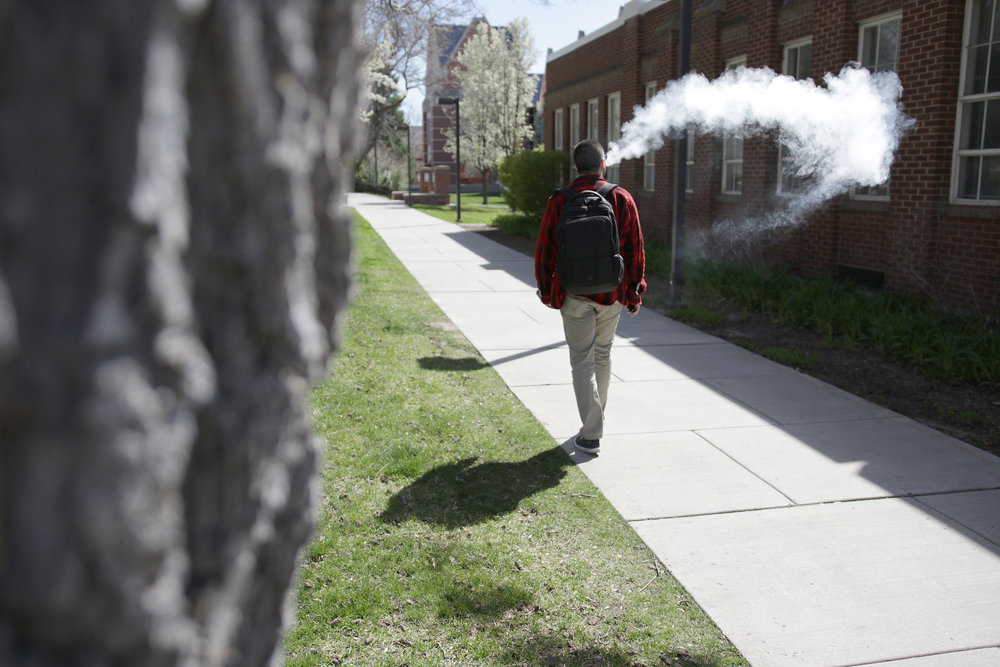 A student blows a cloud of smoke from his vaporizer while walking across Westminster College’s campus on April 5. Some students said vaping culture—where many people vape for fun rather than as an alternative to traditional cigarettes—has started to die out on campus. Photo by Jacob Smith.

Some people use e-cigarettes or vaporizers as alternatives to traditional cigarettes, but students said vaping on Westminster College’s campus has become a sort of secret subculture that has mostly died out.

Jen Librizzi, a junior photography major, said she strongly dislikes vaping and the entire culture behind it. Librizzi said most of the people she knows who vape do it for fun rather than as an alternative to traditional cigarettes.

“Vape culture is extremely douchey, I think,” Librizzi said. “I just feel like they have nothing else about themselves that they feel confident with, so they just mask it by blowing smoke.”

Librizzi said it’s not that people who vape are bad but that they tend to be rude and inconsiderate of other people around them.

“I’d say the most annoying thing is definitely the smell when someone… like, let’s say for instance here on campus, if I’m walking and someone blows [smoke] right in front of me and I walk like straight through their poof juice,” she said.

The photography student said she has had countless experiences of other people blowing their vapor clouds on her.

Librizzi said the smell bothers her more than anything.

“I think the fact that it’s just so artificial and that there’s so many chemicals to put that smell into what you’re ingesting into your body,” Librizzi said. “It just kind of grosses me out. All I can imagine is like someone inhaling maple syrup.”

Librizzi said she has noticed fewer people vaping on campus this year than she did last year, which she thinks is because vaping as a social trend has mostly died out. She said there are still people who vape but thinks far fewer do so in public now.

The senior economics major said he thinks more and more people are viewing vaping as a bad thing. However, Kerper said the stigma isn’t stopping people who started vaping to get away from smoking cigarettes.

“I have seen people vape in class,” he said. “The teacher didn’t notice. He actually thought it was a cob web in front of the projector.”

“I would say that I’ve actually smelled a few flavors that smell like air fresheners,” he said.

Students who still vape on campus said they got into vaporizers to get away from cigarettes but now find themselves giving up vaping for the same reasons other people dislike them.

Cian Bremer-Zydenbos, a junior marketing and aviation management student, said his primary reason for vaping was to quit smoking cigarettes. But after a while, he said he wanted to stop vaping, too.

“It just became too much,” Bremer said. “It really just came down to where it was annoying and expensive.”

Bremer said vaping has become a money pit for him over the past four years and said he’s spent close to $1,500 on vaping equipment.

“My parents also just were like, ‘That is the most unattractive thing,’” Bremer said. “Even my friends were getting sick of it. On, like, long road trips, I’d be blowing [smoke] and it would just be going back in their face and, like, clogging up the whole car. They would actively make fun of me for it.”

The junior marketing and aviation management student said he thinks vaping has become a weird subculture people tend to think badly of.

Bremer said he thinks money and health concerns, among other reasons, have contributed to the death of vape culture on Westminster’s campus. He said at least half the people he knows who owned a vaporizer or e-cigarette at some point have sold them and don’t vape anymore.

April 12 at 6:21 PM – Editor’s note: The Forum approached four students who vape for an interview, but all declined to comment.