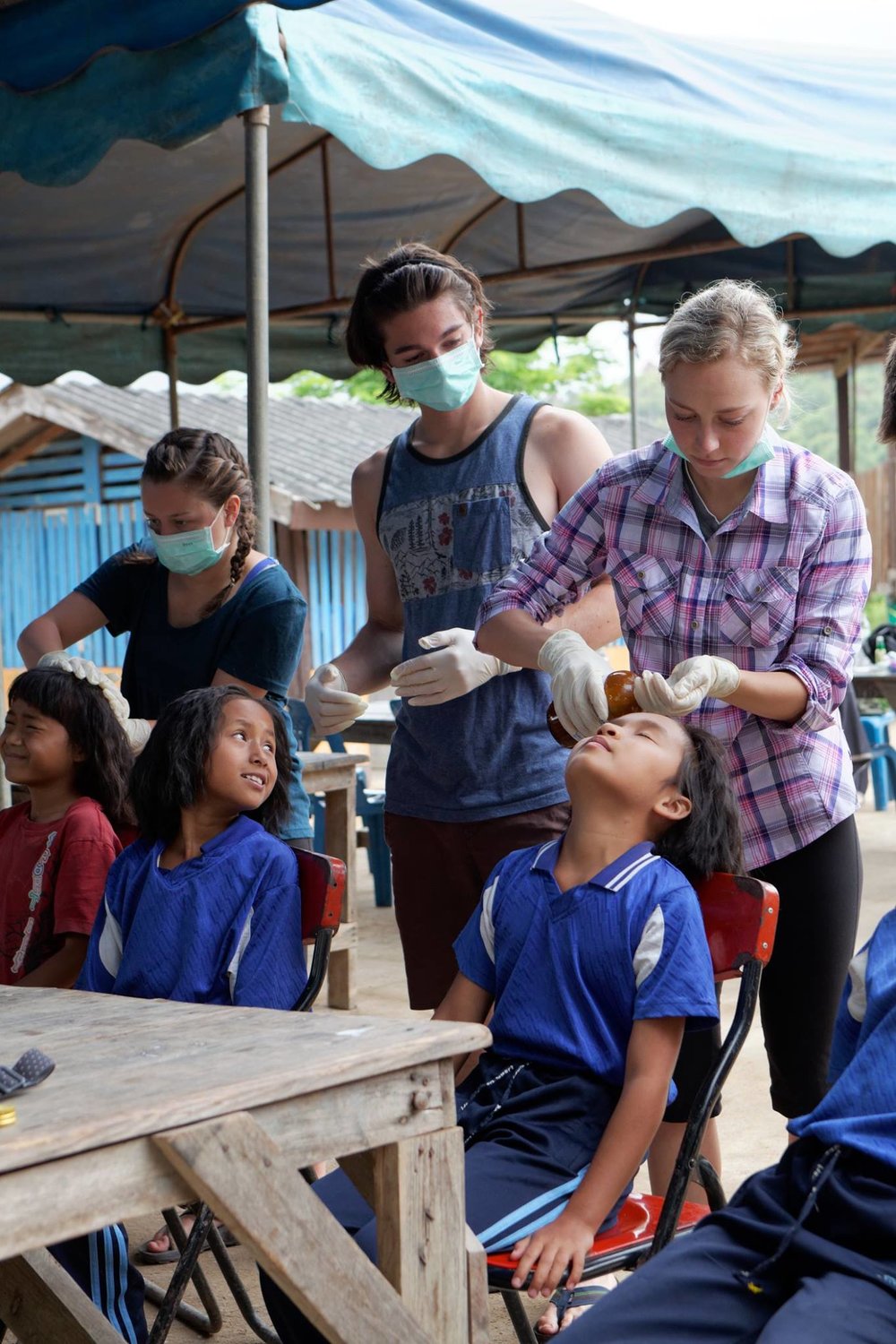 Zoe Cohn, Gabe McKenzie and Madison Wageck treat students’ hair for head lice at the Ban Tung Ting school in Northern Thailand as part of a Westminster College May Term Study Experience. Han Kim, the trip’s leader, said the college has already approved three more years of the May Term Study Experience to Thailand, which he said helps create longer-standing relationships with those villages. Photo courtesy of Han Kim.

Some Westminster College professors who teach May Term service-learning trips said they try to reject the “white savior complex” while abroad.

The white savior complex is described as the tendency Western civilizations sometimes have to enter countries they perceive as struggling with the goal of ‘fixing’ the problems individuals in those areas face.

Ranjan Adiga, a professor on the India May Term trip and an assistant English professor, said this aim is misguided.

“They are not waiting for us to come and help them,” he said.

Westminster students learn how to plant rice in Northeast Thailand near Kalasin, Thailand, an aspect of cultural immersion students on the trip engage in. As the Buddhist monks pass by, each student will offer alms, or gifts, to the monks, which are the only personal items and food the Theravada Buddhist monks are allowed to use. Photo courtesy of Han Kim.

Han Kim, a public health professor at Westminster, is gearing up to take his ninth group of students to Thailand and said he keeps this framework in mind throughout the trip.

Kim said his connections in Thailand have allowed him to make the trip more immersive than most May Term study abroad experiences because Westminster students return to the same village each year until it becomes sustainable. The college has already approved three more years of the trip, which he said creates longer-standing relationships with those villages.

“It’s important if we are truly going to be global citizens,” Kim said. “We actually have to go there and create these relationships.”

The India May Term trip takes a similar approach. Adiga said the villages they visit have grown familiar with Westminster and look forward to visits from the college.

“[The villages] see it as a partnership,” Adiga said. “Let’s learn together.”

Though both professors said service-learning trips can be problematic, they said their study experiences aim to create a collaborative learning environment between the locals and the students.

Jordan Dyett, a junior global justice and economics major, said it’s important to have conversations about the white savior complex.

He said the idea that the group was “going to go to Thailand, do all of this service, and change the lives of the people that we served” was “a common misconception about the trip in general.”

To combat these culturally-rooted frameworks, Kim said he fosters class conversations about the motivations of going abroad during pre-trip meetings.

Westminster students Lexie Webber, Jordan Dyett, Danika Kimball and Will Carrington play games with the school children of the Ban Tung Ting School in Northern Thailand. As the Buddhist monks pass by, each student will offer alms, or gifts, to the monks, which are the only personal items and food the Theravada Buddhist monks are allowed to use. Photo courtesy of Han Kim.

Dyett said these conversations made a difference in how he approached his service-learning experience.

“I learned a lot about myself and a lot about how problematic service learning abroad can be if it is not presented in the correct way,” he said.

Though not all May Term trips are service-oriented, many still work toward ending white saviorism.

Kristjane Nordmeyer, an associate professor of sociology, said she intentionally created her May Term Study Experience to Scandinavia as a way to push back against white saviorism.

“We’ll approach this trip, like all of our trips, from a ‘learners, not leaders perspective,” Nordmeyer said.

Nordmeyer’s trip to Scandinavia explored race and gender, viewing the places they visited as “model countries,” which they perceived as more successfully addressing these areas than the United States has.

Nordmeyer, along with her 2014 trip co-leader and a former undergraduate student, has also written a scholarly article about ending white saviorism in study abroad trips.

“While I think that many service learning trips do this well, it is possible that they may also unintentionally use a ‘white savior’ lens when they visit other countries,” Nordmeyer said. “We wanted to flip this dynamic and learn from countries that are doing better than we are in the United States.”

For Kim, planning a service-learning study abroad experience begs a central question: “How do you immerse yourself in a different culture in an appropriate way?”

“Unfortunately, we’ve been doing it the wrong way for centuries now,” he said.

Adiga said the best way to address the white savior complex is to have a very direct conversation about it—even if that conversation is uncomfortable.

“If you have grown up in a more privileged environment, you may think that impoverished countries may ‘need us,’” Adiga said. “Especially because we are saturated with that type of information from the media”

Through addressing concerns of white saviorism on May Term Study Experiences, the professors said participants on these trips can better ensure their time is beneficial to the community they visit but also to themselves.