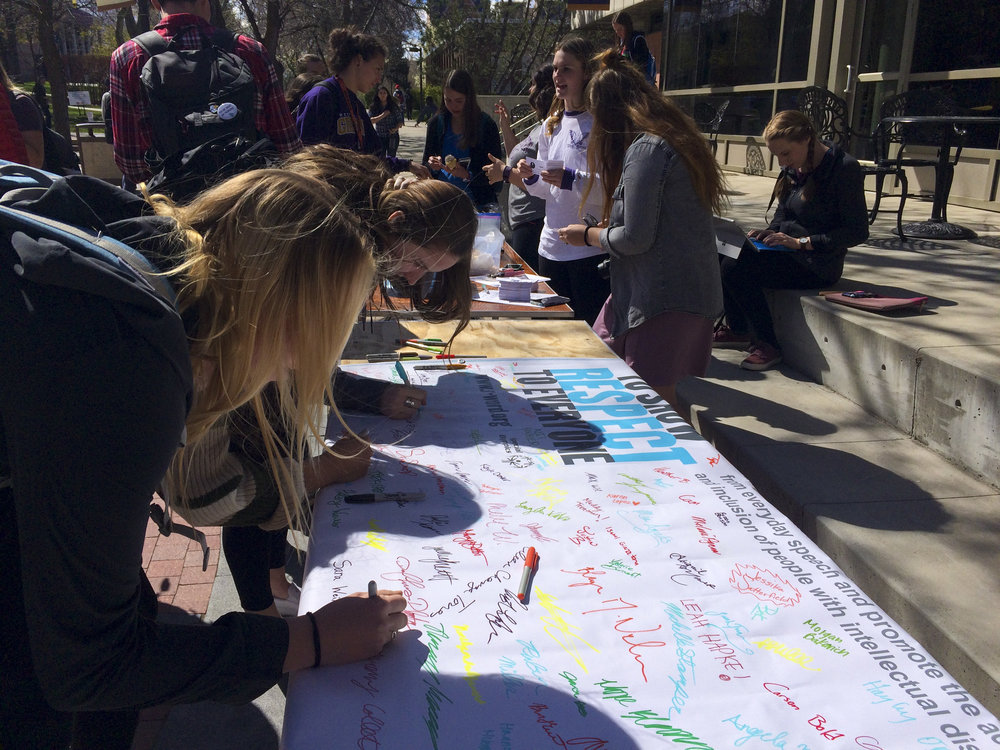 Westminster students sign a banner in the Richer Commons on April 4 pledging to help “spread the word to end the word.” The language campaign was part of the Disability and Neurodivergence Events Series, which centered around educating the campus community about language, acceptance, inclusion and education for people with all different kinds of abilities. Photo by Dariia Miroshnikova.

One student with autism started it all.

Westminster College’s first disability event began eight years ago, spurred after a student came to Shamby Polychronis, an assistant professor in the school of education, and asked for an event related to autism awareness.

What started as a one-day event has now evolved into two weeks known as the Disability and Neurodivergence Event Series, which focuses on educating the campus community about language, acceptance, inclusion and education for people with all abilities.

“It can be very lonely on a college campus for people with learning differences or dyslexia or autism because it’s not something you wear on the outside,” Polychronis said. “[Creating these events] is an attempt to really create a safe space for people who come by and socialize and feel part of a campus. It’s really an invitation for people on the spectrum to have a place where they’re comfortable and they are included and they see other people like them.”

Polychronis and her students organized a variety of events—from a language campaign to lectures about parenting children with dyslexia to an evening of sharing personal stories celebrating disabilities and neurodivergence.

“We have so many similarities between religion, gender, ethnicity, racial backgrounds [and] disability,” Polychronis said. “And all of those pieces and really the difference is different for sure, but the struggle is all the same. It’s discrimination. It’s misunderstanding. Everybody is fighting the same struggle, so let’s bring it together.”

The purpose of the events is to move away from the idea of “if it’s wrong, it has to be corrected,” Polychronis said.

Ebony Tyler, a sophomore with a customized justice studies and special education major, said having events like this gives representation to and humanizes students with disabilities—something she said is essential for individuals to learn more about language, acceptance and equity.

“So often it’s easier to push people with disabilities aside—let them just hang out on the sidelines [or] on the margins and not really acknowledge that they are there and that they contribute to our society,” said Tyler, who has a condition called conversion disorder, in which psychological stress shows on the body in physical ways. “I like having two weeks of these events when we focus on representation of [people with] disability and with being neurodivergent.”

Many Westminster students got involved this year to help educate their peers. Naena Bland, a junior studying elementary education, said it’s important for people to understand and be aware of disabilities and neurodiversity.

“The way society views people with disabilities is in a negative way,” Bland said. “If you have a disability, it doesn’t make you any less equal to people who may not have a disability, so I think everyone needs to be aware that having a disability isn’t a disadvantage to you. It’s just different.”

Though Polychronis said people probably won’t change the way they treat those with disabilities after one lecture, she said the events are still worth organizing and attending.

“True acceptance, inclusion and safety—if any of these things make a difference in one student’s life, it was worth the whole year of events,” she said.