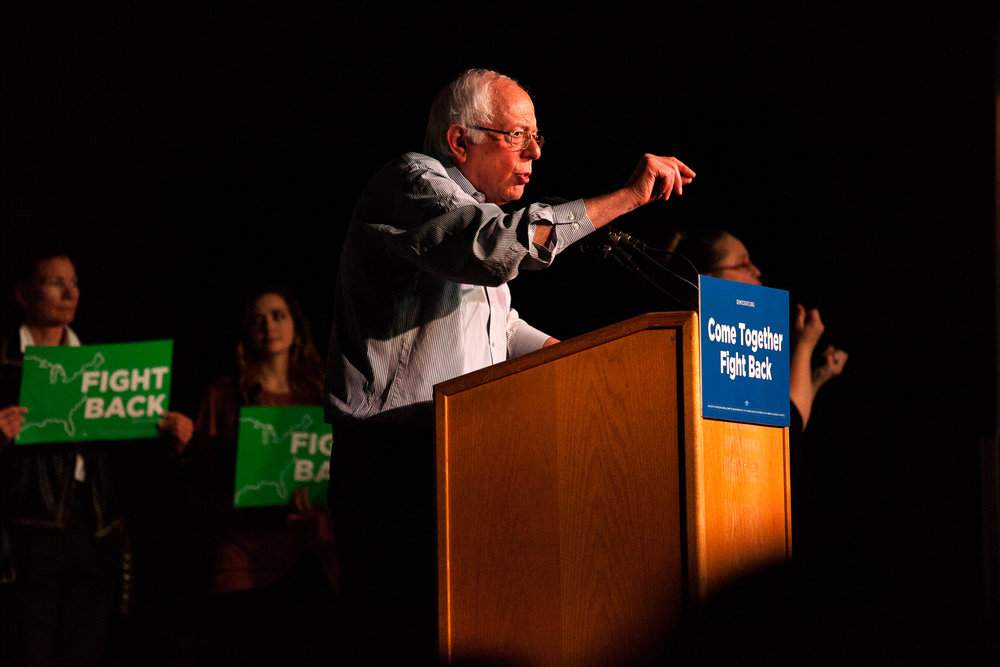 Vermont Sen. Bernie Sanders speaks to a crowd of 3,000 at a Salt Lake City rally on Friday. Sanders, Democratic National Committee Chair Tom Perez and other Democratic Party leaders came to Utah as part of their “come together and fight back” tour in hopes of motivating Democrats in the state to step up and take action concerning economic, climate and humanitarian issues. Photo courtesy Evan Lai-Hipp

“We can come together and create the future we want.”

That was the overall message at Vermont Sen. Bernie Sanders’ tour in Salt Lake City on Friday.

Sanders, Democratic National Committee Chair Tom Perez and other Democratic Party leaders met and gave speeches to an enthralled crowd of 3,000 on Friday in hopes of motivating Utah citizens to step up and take action concerning economic, climate and humanitarian issues affecting the state. Their “come together and fight back” tour looks to unite Democrats across the nation with stops in eight states.

Utah, a traditionally red state, proved Sanders-friendly when the senator ran for president in 2016, and he has maintained his popularity since. In March, about 14,000 Utahns attended his rally in Salt Lake City.

Sanders was popular on Westminster College’s campus, as well. Before the 2016 presidential primary, many students said they planned to vote for the senator from Vermont.

Jackie Biskupski, the Democratic mayor of Salt Lake, became the city’s first openly gay mayor when she was elected in 2016— a victory the Huffington Post speculated shows things are changing in conservative Utah.

Though Salt Lake City is becoming more liberal, the rest of the state remains politically conservative. This year, Utah sent 40 delegates to the Republican National Convention in Ohio.

Spectators at the Sanders rally voiced their displeasure with Utah’s predominantly conservative government.

“This state is a one-sided pile of crap,” said Jim Harvey, a Utah resident who has lived in the state for over 30 years. Harvey said Utah’s delegates partake in “pork belly procedures” and don’t listen enough to their voters.

Both speakers and spectators at the rally also criticized the U.S. government for its policies on health care and beyond.