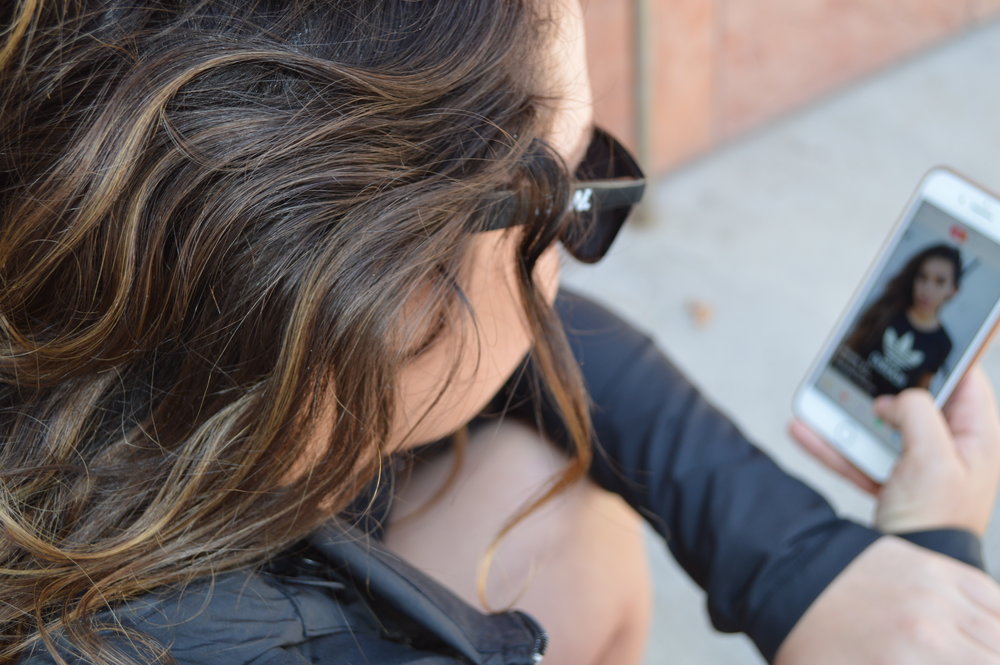 Audrey Kriss, a junior marketing and sociology major, flips through Tinder on her iPhone at Westminster College on April 5. Approximately 70 percent of millennials “hook up” during their college experience, according to a study conducted by sociologist Paula England and her colleagues. Photo by Mariah Brown.

Correction: A previous version of this story used a name that has now been redacted to anonymous.

Approximately 70 percent of millennials “hook up” during their college experience, according to a study conducted by New York University sociologist Lisa Wade and her colleagues.

England’s research shows the term hookup is ambiguous and its meaning can change depending on context and the people involved.

Students participants in England’s research said they hook up because of different social situations: alcohol consumption, dating apps and downplaying are all norms of modern-day hookup culture.

Anonymous, who said he identifies as a gay male and could therefore only speak about his experience as a member of that group, noted the prevalence of hook-up culture he’s seen.

“I wouldn’t even say gays have a dating culture,” anonymous said. “I’d say they really only have a hookup culture, and it’s really self-destructive and awful.”

Anonymous said he thinks it’s depressing how people let sex affect their ideas of self-worth, which he said he believes is largely because of negative Western cultural conceptions of sexuality and virginity.

“It can have serious emotional implications because what you’re doing, at least for me, is having mindless sex,” anonymous said.

Anonymous said he believes having sex should not be perceived as an accomplishment by itself. Rather, he said he thinks having emotionally fulfilling and loyal relationships should be commended instead.

“The thing is, this isn’t even special,” anonymous said. “The technique is like you send out your dick pic to 20 different guys then you wait to see who bites back.”

Anonymous said social media and dating apps are more convenient than dating because it eliminates the discomfort of face-to-face initiation.

“I can be in class and I can also be setting up when I’m going to be having sex next time—like that’s absolutely fantastic, but it’s just not really helping me emotionally,” anonymous said.

Anonymous said he thinks these compulsions are a result of peoples’ need for instant gratification.

“[Hookup culture has a] negative emotional impact where you really just aren’t feeling fulfilled,” anonymous said. “You just feel hollow all the time.”

Anonymous said choosing to hook up without having a deeper connection is to deprive oneself of a particular type of satisfaction.

“We’re people and we need to be satisfied and we need to be fulfilled emotionally, physically and sexually,” anonymous said. “And when you’re not experiencing that satisfaction it’s like a deprivation of sort.”

Carly Keogh, a junior nursing major, said she thinks dating apps have enabled people to meet others outside of their circle and has provided shy individuals with a much needed outlet. However, she said she thinks the apps can be problematic because they create a virtual environment in which people are always searching for a perfect person who may not exist.

“In some cases, I think it has given people a chance to think that there’s always something ‘better’ out there,” Keogh said. “And if they don’t keep swiping or something, they will never know.”

Keogh said she thinks there is a lack of communication among participants in hookup culture — regardless of their gender or sexuality.

“From what I’ve seen, both parties lack communication during something like that and no one really tells the other person what they are looking for, which ends up failing in the end,” Keogh said. “I don’t think that one gender takes hookups more seriously than the other, but I think people just need to be upfront from the beginning of what they are looking for—like something casual or not—before they even take things to that level.”

Kristjane Nordmeyer, an associate professor of sociology and gender studies at Westminster, teaches a range of classes that approach subjects of sexuality from a pleasure-based perspective.

Nordmeyer said there is a stigma around sexuality, sex and bodies, which is why she gears her classes towards education about pleasures rather than consequences. So far, she said she’s seen positive results in the classroom.

“I bring [these topics] up and study [them] not only because I am a sociologist and this is my area—sexuality and gender—but because students want to talk about it,” she said.

Nordmeyer said the term “hook up” is intentionally ambiguous because it allows for the participants to either overplay or underplay the interaction.

“Part of the ambiguity allows people to kind of shape their own social status in a way,” Nordmeyer said.

Nordmeyer said people often use hook ups as a way to climb the social hierarchy.

Nordmeyer said women often downplay hook ups to preserve their social status because their sexuality can be linked to their reputation in a bad way.

Though hooking up has become easier than ever with the invention of dedicated phone apps, Nordmeyer said casual sex is nothing new.

“Every generation has had casual sex,” she said. “I think what makes it different today, from what we social scientists are hearing from students, is that if you want a long-term relationship oftentimes you have to engage in hookup culture in order to be in a relationship.”

Nordmeyer said carelessness is a common characteristic of hookup culture.

Nordmeyer said some people love hookup culture but said the aftermath can be negative for many people.

“[Hookup culture] can lead to some really bad relationships if everybody is trying to get distance and not to be the one that cares more or the one that reaches out first,” Nordmeyer said.

Hooking up can have negative implications for those looking to foster long-term relationships who see hookup culture as the only route because it can lead to self-doubt if treated poorly after, according to Nordmeyer.

Calen Smith, a junior neuroscience major, is currently in Nordmeyer’s Human Culture and Behavior class, which has spent time learning about hookup culture.

“[Dating apps] move hookup culture from kind of a, like, social activity into, a private, on-demand sort of activity,” Smith said.

Anonymous said he was recently having a bad day and was able to find someone to hook up with on the dating app Grindr within 20 minutes—something Smith said seems to be part of the appeal of today’s casual sex climate.

“I think that modern technology has enhanced hookup culture in that it just makes finding somebody that’s willing to hook up with you so much easier,” Smith said. “It kind of eliminates this awkward gray area of in-person interactions where you have to figure out what the other person is into.”

Smith said he has met people from Tinder he has hooked up with and people he has dated for short periods of time.

“I think that as long as everyone is straightforward about what they want, they will get what they want out of it,” Smith said. “I think communication—while it’s not necessarily a big part of hookup culture—definitely should be.”