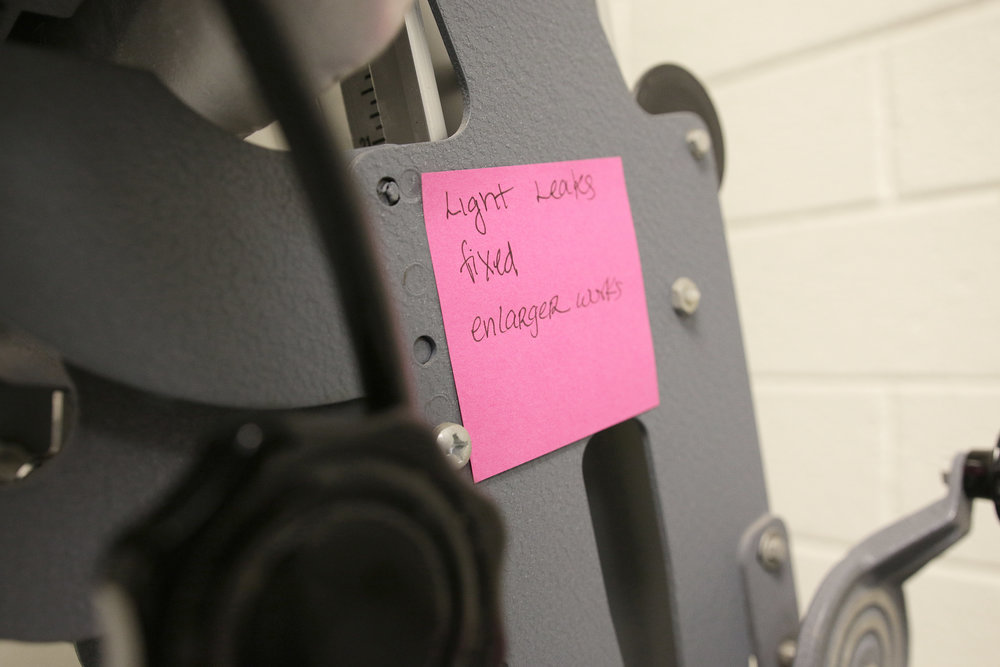 A sticky note clings to the side of a repaired enlarger in the photo lab at Westminster College. Some students on campus said they have noticed a difference in the quality of resources respective to various areas on campus and said the college is lacking overall with its availability of modern technological equipment. Photo by Jacob Smith.

Many students at Westminster College said the availability of technological resources on campus is lacking, and some have even left the school in search of better equipment.

Colin Becker, a senior film major, left Westminster to attend Salt Lake Community College (SLCC) and study video production. He said a big motivator in his decision to transfer schools was SLCC’s readily available technological resources, which he needs for his degree.

“Westminster’s equipment is outdated, often poorly kept and essentially inadequate for any use aside from simple, news-style interviews,” Becker said. “In all reality, the cellular phones that students carry around in their pockets have cameras that are for all practical purposes more capable than the Panasonic HMC-150s stored in the Westminster gear room.”

Becker said Westminster needs to invest in new equipment to give its students a more competitive and well-rounded education—especially when it comes to video production.

Administrators at Westminster said the college tries to do what’s best for the greatest number of students when planning the budget.

Curtis Ryan, the vice president of finance and administration, said the college evaluates its need for equipment upgrades annually through an extensive process.

“As the college starts working on its budget for each academic year, it solicits requests across campus,” Ryan said. “That information—along with whatever other department needs—are accumulated and brought together and then put forth by each of the various deans, IT and all the departments across campus.”

“We have a planning and priorities committee that looks at all these requests,” Ryan said. “On that committee you have faculty, you have staff and you have students and they kind of look at and prioritize what we do.”

The vice president of finance and administration said students can actively voice their opinions about the need for upgrades.

“It can also be done at the classroom level and a faculty member or instructor can share those same concerns with their respective dean,” he said.

The Westminster College photo lab maintenance board identifies equipment in need of repair. Some students said they think the availability of modern technological equipment on campus is lacking and needs to invest in new equipment to give its students a more competitive and well-rounded education. Photo by Jacob Smith.

Ryan said the college readily considers what students need most throughout its budgeting process.

“It’s been my sense that anything student related—student learning or safety, things like that—are always prioritized pretty highly,” Ryan said.

Joe Caesar, a senior marketing major, said he thinks the business school and several other programs are well equipped but other areas need improvement.

“I think the CFA lab has a lot of cool technology in it, and we just got brand new monitors,” Caesar said. “But a lot of other places on campus aren’t as good.”

Caesar said he’s noticed a difference in quality of resources respective to various areas on campus.

The senior marketing major said even though some buildings have better technology than others, there are still issues he thinks students shouldn’t have to worry about.

“Even the availability of electrical outlets on campus isn’t great,” Caesar said.

Isabel Giarrantana, a sophomore nursing student, said she thinks the nursing program has some impressive technology initially but said it’s not as illustrious on second glance.

“Well, we have dummy bodies, which are thousands of dollars, and I think that’s pretty advanced technology,” she said. “When you look at them physically, it is outdated. There’s technology that has led to new discoveries and then our equipment isn’t up to date with that, so it’s like, ‘What’s the point of using the old equipment?'”

The sophomore nursing major said she notices how outdated Westminster’s technology is when she thinks about other schools in Utah.

However, not all students said they are disappointed by Westminster’s resources.

Emilio Giokas, a Westminster alumni, said he isn’t as dissatisfied as others when he thinks about the technology he used on campus.

“As a business student, I was always in the CFA lab and the equipment in there always seemed to be just fine,” he said. “It was always good enough.”

Giokas said he doesn’t think Westminster has the nicest equipment in the state but said it’s not necessary to have the most expensive technology.

“I mean, I never thought we had the nicest, fanciest equipment, but it always got the job done,” Giokas said. “I would say it was adequate.”

The Westminster alumni said he was only frustrated by the equipment a handful of times.

“Sometimes the computers were slower than they should be, but now that I’m out of college and working on 20-year-old Dells, I realize it could have been a lot worse,” Giokas said.

Amanda Moore, a contingent professor of photography, said she thinks some students are frustrated because they are getting a different education from Westminster than they expected.

“I think that unfortunately— or fortunately, it depends on where you stand on this— liberal arts educations are not necessarily seen as the lofty kind of degree they used to be,” Moore said. “A lot of people are looking for technical educations. That’s one reason why our nursing [program] does so well. When you leave, you’re going to have a job.”

“Liberal arts aren’t really making the money or the enrollment right now that tech schools are or even for-profit schools like the Art Institute,” Moore said. “They have money because it is for profit and they can afford to offer access to the newest technology. Plus, it increases their enrollment.”

The photography professor said it’s more than fancy technology that makes a quality education, and she said she thinks Westminster provides that.

“As far as our campus goes, I think what you’ve got is something that [has] beauty to it,” Moore said. “There is sort of this purism still in some of the liberal arts.”

Moore said it’s not technology but insight and know-how that are important to her as a professor.

“Right now my priority as an art teacher is thinking how can we get a cohesive art department— not how many toys we can shove into a closet,” she said.