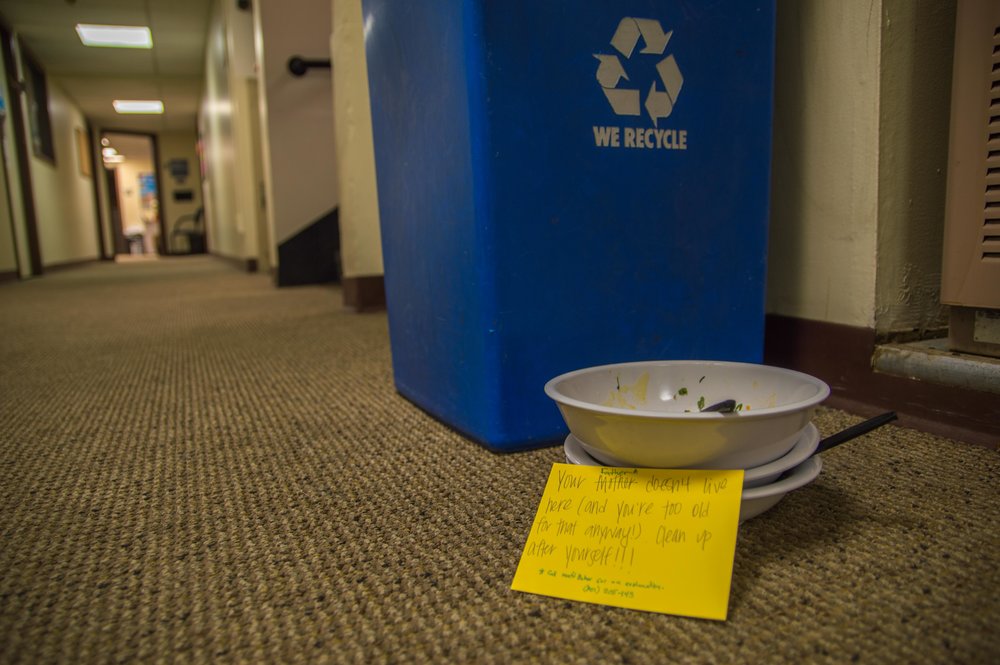 A bowl filled with rotting food sits in the basement of the Shaw Student Center at Westminster College. Failure to return dishware to the Cornerstone Cafe is a widespreadissue—over the course of the spring semester, Bon Appétit has lost 800 forks, 636 knives and 536 plastic cups, which the college now has to replace. Photo by Christian Anderson.

The Cornerstone Cafe in the Shaw Student Center at Westminster College is experiencing an abundance of theft—and it’s happening in broad daylight. Students are eating their pizza before they make it to the register, swiftly sneaking food into their pockets and backpacks and making off with the cafe’s utensils and plates.

Bon Appétit cashiers said they have seen students stuffing their to-go containers with far more food than they claim at the register.

Marie Dorronsoro, a full-time cashier at the Cornerstone Cafe, said many students complain about how expensive the food is or that they don’t have the money for a meal.

“The most common thing I see is students eating or drinking something while they walk around the cafe, so that by the time they get to the register the food is already gone and they don’t have to pay for it,” Dorronsoro said.

Cashiers and cafe managers who witness theft said they do their best to handle it within the cafe, but their best recourse in these situations is to turn the students into Mark Ferne, dean of students.

However, monitoring the utensils and plates is much more difficult. Bon Appétit started off the year with 480 plates but was barely scraping by with 40 by March.

Alexys Smith, a sophomore communication major, said she often sees students leaving the cafe in Shaw with plates and other dishes.

“Because plates are going missing and there has been so much theft this year, we have had to start using a lot of paper products and to-go boxes, and it seems very wasteful,” Smith said.

When Shaw runs out of plates and dishes, students may have to pay a small surcharge to use disposable to-go items.

Over the course of the spring semester, Bon Appétit has also lost 800 forks, 636 knives and 536 plastic cups, which the college now has to replace.

Although Bon Appétit previously provided pick-up stations in multiple buildings on campus, it has reduced the quantity because students were leaving plates and eco-containers in places they didn’t belong. Dale said he has heard from a number of students that they feel they are too busy to return their dishes.

“I don’t think students always recognize the ramifications of what theft does—not just for their own moral being but also how that has a negative effect on prices or tuition,” Ferne said.

Jeff Brown, director of auxiliary and conference services, is the campus liaison to Westminster’s food service and said the continual attrition of inventory may very well affect future prices of food items as Bon Appétit tries to keep them as low as the market will allow.

“We have an annual budget to purchase new, or replace old, small wares—plates, utensils, cups, glassware,” Brown said. “This year, we’ve blown through that budget already and are now experiencing a shortage of these items with still over a month left in the semester.”

Bon Appétit’s management team said they never want to see a student severely punished over this, but they do want them to acknowledge that what they have done is wrong.

In one instance, Dale said a Westminster alumni sent Bon Appétit $500 years after graduating with a note including an apology for stealing as a student. Dale said this is not common but was greatly appreciated.

“I know someone who was caught and charged with a misdemeanor,” Dale said. “After graduation, since almost everyone does background checks, they have not been considered for multiple positions because they have a theft charge.”

Dale said that although stealing may seem like a game to some students, they have to consider that taking items from Bon Appétit could keep them from future employment.