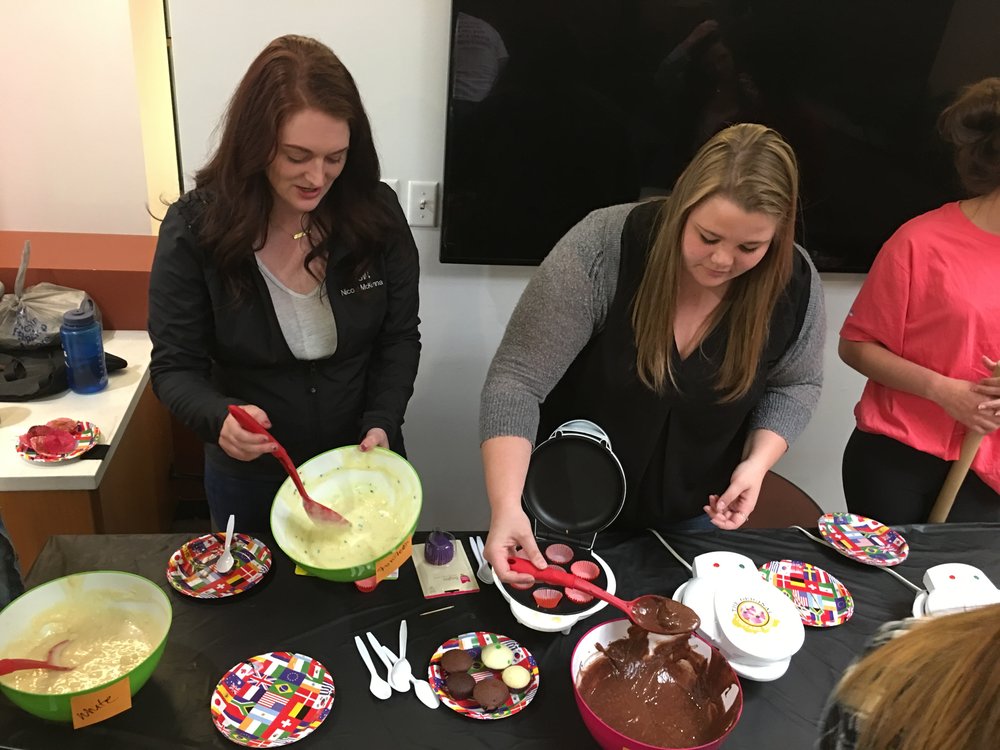 Nicole McKenna, ASW.Events president, and Kaydee Gilson, ASW executive creative director, run a diversity event called “You-Cakes” in the Shaw Student Center on March 28. Alongside her work as ASW.Events president, McKenna also works two other jobs, which she said can be exhausting when coupled with a full-time class load. Photo by Zerrion Payton.

Some students juggle a full-time course load with full-time work in order to make ends meet—a balancing act they said can be taxing on their mental and emotional health.

Westminster College has a policy that limits students employed on campus from working over 20 hours per week. However, students who work off campus don’t have to abide by this policy.

Catherine Blakemore, a senior communication major, said she is currently taking 16 credit hours and working four jobs. On campus, Blakemore works as the senior creative director for ASW and is the design editor for the Honors program’s newsletter. She also works for her family company doing marketing and design and has her own business doing similar work.

“I feel like [working full time] is exhausting and it’s exhilarating,” Blakemore said. “At the same time, I also feel sometimes really overwhelmed by the tedium and tasks that school sometimes provides when I have bigger things going on in my professional career.”

Blakemore said she loves what she does but doesn’t feel she has a balanced schedule because she works 50 to 60 hours per week. She said she strives to “absorb as much as [she] can from the classroom” while building her business as she nears the end of her college career.

Blakemore said she intentionally plans date nights and personal time into her schedule in an effort to maintain a sense of balance and cope with stress.

“My number one strategy for maintaining that work-life-school balance is time blocking my personal life,” she said.

“I definitely try to set aside a couple hours every week to just like go home, do my laundry and clean my room,” McKenna said. “Do things that are like, okay, I’m just going to get my life together.”

McKenna works on campus in the community relations department and as the ASW.Events president and off campus at Valley Behavioral Health as a case manager for incarcerated women—which totals 50 to 60 hours of work per week along with16 credit hours.

“I feel really exhausted, and I wish that I didn’t have to [work as much],” she said.

However, McKenna said she has had a packed schedule for so long she wouldn’t know what to do if she had free time.

Zoe Reik, a junior psychology major, is also a full-time student and works about 35 hours per week at Chipotle.

“In general, it’s really tiring,” Reik said. “I get home and I’m so exhausted, you know, and it doesn’t really end.”

Reik said her mother pays her tuition and rent. She said the money she makes goes toward expenses like food and utilities.

“[Balancing work and school] can be difficult,” she said. “I think having a flexible employer makes it easier because I can take days off if I need to.”

Overall, McKenna said she thinks working full time while also being a full-time student can be unhealthy and has become an unfavorable norm for college students in the U.S.

“I think everyone kind of assumes that working through college is just something that everyone does,” McKennna said. “But I think that that’s not really a healthy precedent to set.”