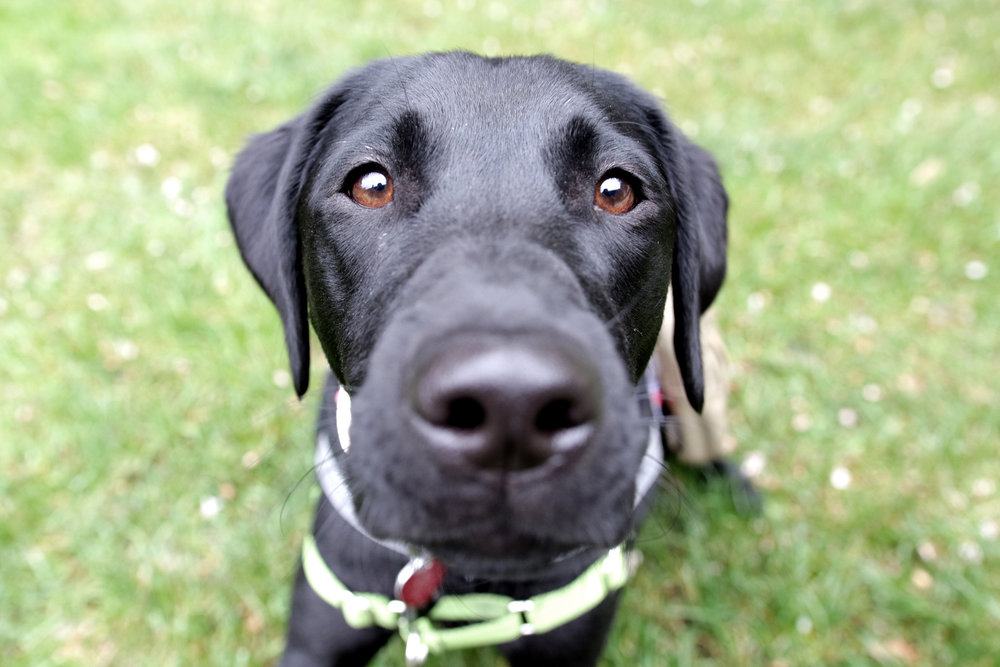 A service dog named Sailor looks into the camera. Students at Westminster College said service animals can help people who have been through psychological trauma or have physical disabilities. Photo by Jacob Smith.

For many, service animals at Westminster College provide their owners with therapeutic benefits and a way to help others.

Breanna Steffen, a junior sociology major, has an emotional support cat, which she said helps her cope with generalized anxiety and depression. She said she decided to pursue a service animal as an additional support system after utilizing the campus Counseling Center.

“I was already using the campus support systems and doing some work in the Counseling Center, so it was just a good step to take as an extra support,” Steffen said.

Though Steffen said the Counseling Center and Student Health Services were helpful, she wanted something that was more permanent and didn’t require scheduling.

“I wish we had some more staff available [in the Counseling Center],” Steffen said. “It’s pretty much all booked up all the time.”

“I know that mental illness and PTSD are big reasons,” Steffen said. “Animal therapy–pet therapy–is really beneficial for, I would say, pretty much anybody.”

Steffen said certifying her cat as an emotional support animal through Westminster was a legitimate, thorough process that prevents people from abusing the system.

“You basically need a letter from a licensed medical practitioner proving your need for the animal, and then you file additional paperwork with disability services,” Steffen said. “It is a bit of a process, for sure, but I totally understand the need for it.”

Some students who have service animals on campus are training them for people off Westminster’s campus who have similar needs as Steffen does. Nathan Guyer, a senior

Guyer became involved with the organization through the Westminster ROTC program when one of his supervisors approached him and several other students about the opportunity.

“He came in one day and said, ‘Hey, we’ve got a dog coming in and we’re looking for a team to train the pup,'” Guyer said. “It was something we were all interested in and thought would be helpful to the veterans in the organization, so we said yes.”

Guyer and three other students split time with the dog, which he said was one of the appealing things about the opportunity. He said splitting time with the dog made the experience more manageable and balanced, which allowed him to get his work done while still getting to spend time with the dog.

“I think maybe for someone that wants to own a dog but doesn’t want the full responsibility of a dog full-time, this is a good balance,” Guyer said. “And then also it’s just another approach for students to get involved with volunteering and community service.”

“I just think there’s a lot of research and proof that having a dog with you is super therapeutic, and for a lot of people, it can really help them.” According to the UCLA Health System, animal-assisted therapy has been shown to reduce blood pressure in healthy and hypertensive patients, as well as reduce anxiety in hospitalized patients.

Other students at Westminster who don’t have a service animal of their own said they think people can benefit from getting one.

Brock Charlesworth, a senior business management major, doesn’t have a service animal himself but said he thinks he understands what they are for and how they can help.

“From my understanding, a service animal is there to support or help a person with either a physical or mental disability,” Charlesworth said.

The senior business management major said he knows a family member and a student who have service animals.

“It seems very beneficial to both of those people,” Charlesworth said. “It seems especially helpful to the student because it helps them handle their stress in school and stay on top of their work.”

Charlesworth said he’s never been bothered by service animals on campus and said they typically look like they are ready for work.

“I mean, an animal is always going to sniff around to get to know their surroundings, but that doesn’t disrupt class or anything,” Charlesworth said. “I honestly just think they’re doing their job.”