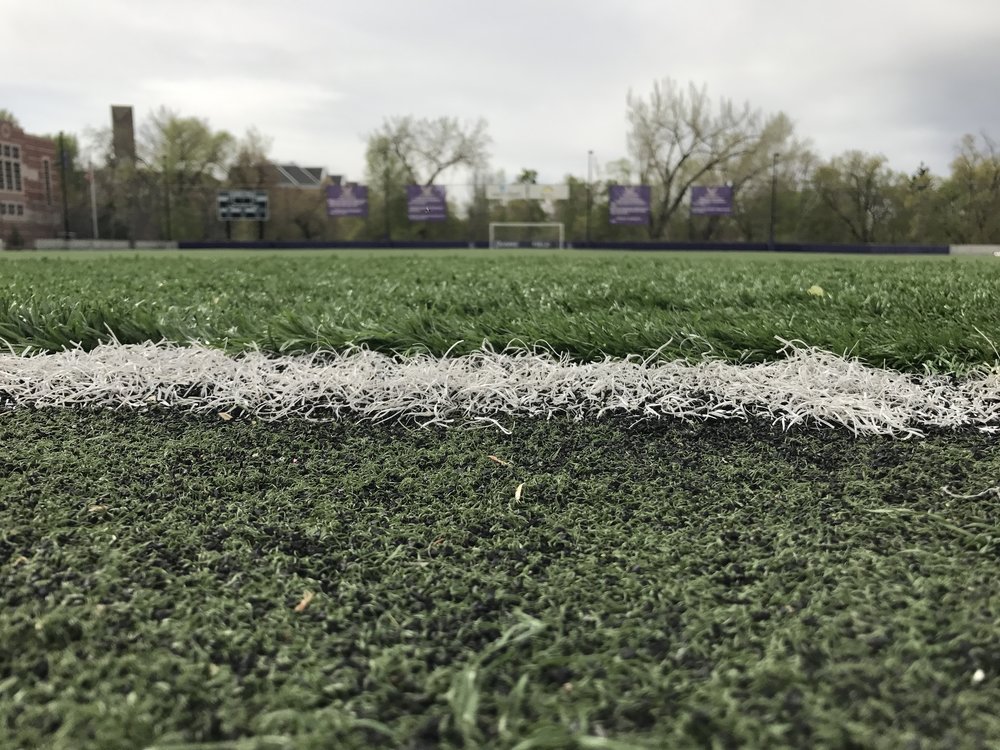 The artificial turf on Westminster College’s Dumke Field is 12 years old, which makes it four years past the suggested industry standard for replacing artificial turf. Studies suggest that outdated artificial turf can contribute to an increased chance of injury and infection. Photo by Bre Empey.

For the past 12 years, Dumke Field has been the center for athletics at Westminster College. But now, students say the aging field—which was created in 2005 and surfaced with artificial turf that hasn’t been replaced since then—poses a safety risk. According to Field Turf, the artificial turf company that installed Dumke Field, the industry standard for replacing artificial turf is every eight years, which puts Dumke Field four years past the suggested warranty.

“I believe the artificial turf does need to be replaced,” said Andrew Clayton, a junior biology major and soccer player. “I have heard from multiple sources that the turf should be replaced around every six to eight years. Our turf will be going into its 12th year of use.”

Clayton isn’t the only student athlete who thinks the turf should be replaced. Several others, like sophomore neuroscience major and soccer player McKell Kellogg, have also spoken out about Dumke Field’s amenities.

“Our turf needs to be replaced,” Kellogg said. “We do not have lights, there is a weird patch of grass at the top of the 18 that slows down the ball, the bleachers are too hot for parents to want to sit on and the poor quality of the turf increases our athletes’ chances of injury.”

Shay Wyatt, Westminster’s director of athletics, said there are many steps to take in order to get the turf replaced.

“I can’t guarantee that we will get it replaced this summer,” he said. “That would be nice, but there’s a lot of steps we have to take with the college.”

Some student athletes said their main concern with the outdated artificial turf is increased risk of injury.

“Cleats getting stuck in the turf is a very serious concern,” Clayton said. “I and many other athletes in my four years have been the recipient to severe injury, including ankle sprain, knee sprains and torn ligaments. I myself tore my ACL because my cleat got stuck in the turf when I was turning.”

Though college sports come with risks, Clayton said the turf increases the potential for injury.

“Although some of those injuries can’t be blamed on the turf alone, the turf is a surface that may lead to a higher rate of injury,” he said.

Student athletes said they’re also concerned about the new patches of turf that rest at the top of the 18 yard box.

“The patches at the top of the goal boxes are ridiculous,” said Hunter Stutz, a junior business management major. “Soccer players need a consistent playing surface, which is not the case at the top of the goal box where there are two completely different types of turf. It causes the ball to bounce in one of the most dangerous parts of the field tactically, which can potentially create lots of problems.”

Now that Westminster is a member of the NCAA Division II, student athletes said they are beginning to expect more from the college and its athletic programs.

“I think the patches look extremely ridiculous,” Kellogg said. “We are a college that has one field to support all of our field teams. We have no practice fields… just Dumke Field, and yet our only field is not up to par. What a joke.”

Because Dumke was built on top of a concrete parking structure and has not been replaced since, students said it has become worn down and hard.

“The turf is in bad condition and some spots across the field are depleted of the little black rubber beads, which creates hard spots and inconsistency,” Stutz said.

Students said the hardness of the turf can lead to stress fractures and other injuries.

“The age of the turf has also increased the density of the field,” Clayton said. “At some parts, it is almost as hard as concrete topped with sandpaper.”

“I do like playing on artificial turf, but not our artificial turf,” Kellogg said. “I like that turf is an even surface so you can kick the ball with an assurance that the ground won’t have an effect on how it lands.”

Editor’s note: Bre Empey is a member of the women’s soccer team at Westminster College.