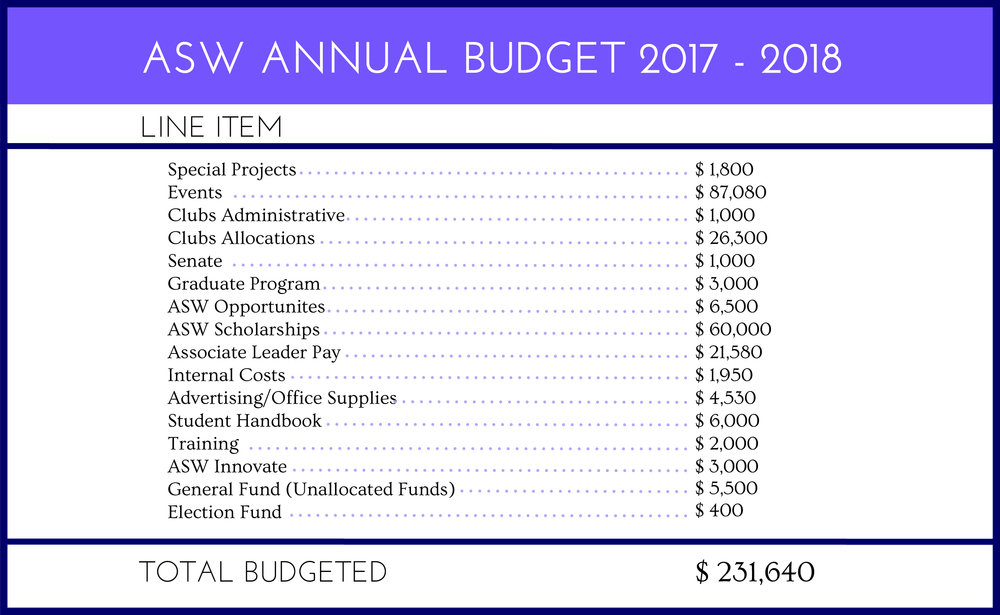 ASW approved its $231,640 budget at its last Senate meeting in April. Each full-time undergraduate student currently pays $55 to ASW in student fees each semester, which funds things like events, clubs and pay for student leaders. (Photo by Jesse Cervantes)

With declining enrollment numbers at Westminster College, fewer students pay student fees — meaning ASW has to stretch the money it gets a little further each year.

“I always tell [students], ‘This is going to be your first conflict,’” said Karnell Black, ASW’s adviser. “We can’t do everything.”

ASW’s current budget is based on estimates for enrollment from the Admissions Office, but the numbers won’t be finalized until the add/drop deadline on Sept. 1. Though preliminary numbers from admissions show enrollment is up — with 505 enrolled students for the 2017-2018 school year compared to 449 as of the add/drop deadline for the Fall semester in 2016 — that doesn’t necessarily mean ASW will get more money.

Each full-time undergraduate student currently pays $55 into ASW in student fees each semester. However, because part-time students are billed based on their credit hours, the organization could make less money despite having more students if fewer of them were full-time undergrads.

“We try our best to put money where students are mostly affected,” said ASW President Ben Pok. “Even though the entire college is taking budget cuts, everybody, including ASW, is doing the best we can to make sure the programs that do matter to students aren’t taken away.”

Black said the student leaders in ASW had to decide where to make cuts based on their goals and priorities for this year, which include transparency, diversity and inclusion and supporting student projects and initiatives.

“If you look at an organization, where they put their money tells a lot,” he said. “It tells a story. Where you put things at in your budget and where things are allocated show how important that line item is to the overall organization.”

ASW.Events took one of the largest cuts, from around $95,000 in 2016-2017 to a little more than $87,000 for the upcoming school year. Now, four months since the budget was approved, Events President Cassandra Yerkes said she’s confident her team will “function pretty well” under the current funding but noted it was emotional at the time to lose that chunk of change.

“During that week or so when it was budget, budget, budget everyone’s tensions were high,” she said. “I’ve been on the team for a really long time and I know how much it costs to put on the types of events we do. You don’t really have time in the meeting to tell people how you feel and justify that.”

Yerkes said her team is planning to cut a few “fluff” events, such as cupcake wars, that haven’t been well attended in the past but will keep the major events, like disco skating, that most students love.

“Our goal this year was to have fewer events that made a bigger impact, so having our budget cut kind of forced us to keep to that goal,” she said.

“Every branch took cuts to make a balanced budget,” Black said. “They get to the nitty gritty of stuff, and I think if students knew the process they went through, they would feel more comfortable with how their money is being spent.”