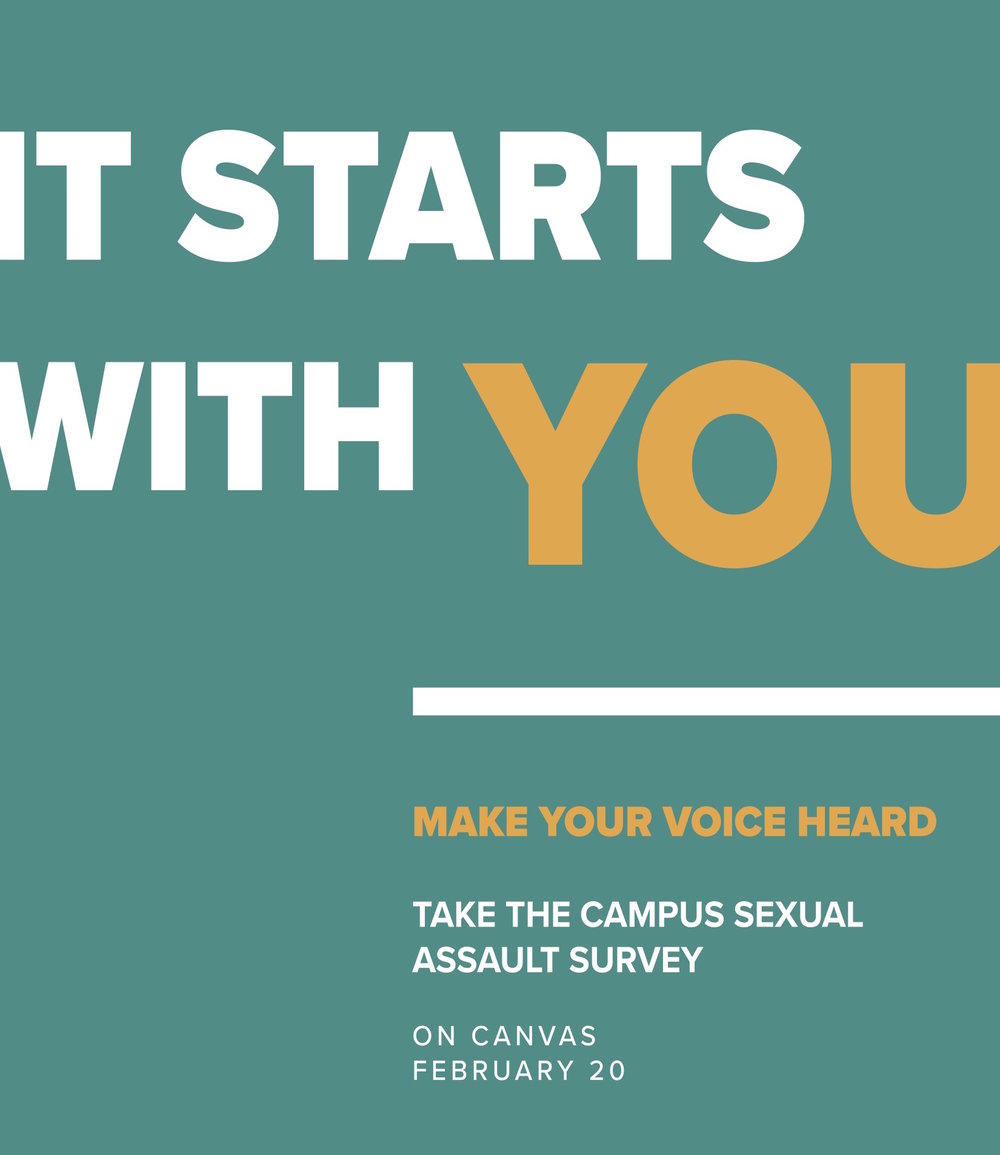 During the spring 2017 semester, Westminster College advertised its campus climate survey through emails and posters around the college. Though the survey reached its goal number of respondents, Title IX director Jason Schwartz-Johnson said the college isn’t planning to use the data because not enough male-identified students responded. (Photo courtsey of Catherine Blakemore)

He later said he hadn’t.

“I didn’t ever make it a priority,” McKelvy said in an email. “I don’t think males relate to these topics as much as females.”

Westminster College’s Campus Climate Survey, which was administered during the Spring 2017 semester, failed to garner enough responses from male-identifying students — an issue colleges and universities across the nation experience.

The purpose of the survey was to understand students’ attitudes toward sexual assault, sexual harassment and interpersonal violence, according to Jason Schwartz-Johnson, Westminster’s Title IX director.

The college conducted a similar survey in 2016 and failed to reach its goal number of participants. Though the 2017 surveyed reached its goal of 20 percent of the student body responding, the college isn’t releasing the data to the public, which many other colleges facing this issue have done.

“It’s hard because on one end, why don’t we just work with what we have?” said Sabi Lowder, ASW Vice President and president of the Feminist Club. “On the other end, I’ve never taken a statistics class. I don’t know anything about what usable data is. But if we don’t have enough of a population taking a survey, then is it like an actual representation of what Westminster’s actual climate is? I don’t know.”

The college not only has no plans to release the data but will also not use it internally, Schwartz-Johnson said.

“When you have results, of whoever the respondents were, so far off from its student population, then it’s statistically invalid,” Schwartz-Johnson said. “That’s our concern. You don’t want to draw any negative or positive conclusions from that. That is not valid.”

“There are all of these things that we did to improve what happened last year,” Schwartz-Johnson said. “[We thought], ‘Okay, this has been vetted at nine schools. This is going to work.’ And we did have a really high response rate — a third of the population, which is great. But it just ended up being that the respondents… the gender was off.”

“As bad as it is to say, I think males need more of an incentive to do things [like this],” he said. “I also don’t think that males are on top of their stuff as much as females — especially if you hear it takes 30 minutes.”

Lowder also noted this issue primarily affects women, though she said it can also affect male and LGBTQ+ populations. She said the school may need to target male populations better.

Schwartz-Johnson said the college isn’t planning another survey until the Spring 2019 semester.

“You want to make sure you are getting responses from different people,” he said. “Also, there is a concern about over-surveying because students do a lot of surveys.”

Catherine Blakemore, a senior communication major, led the survey’s marketing campaign and said she agrees that students are inundated with surveys and information while on campus.

“Every day we get maybe six different emails from six different campus bodies,” Blakemore said. “There are posters literally littered all over campus — on every campus wall, on everything. So I think just adding another poster to that mix, even though we really tried to get it in front of students, put it on campus and get it out there… I think students are just sick and tired of taking surveys.”

Schwartz-Johnson said the school hopes to continue improving the survey and plans to form a committee made of students, staff and faculty to determine what the college needs to do for a successful one in 2019.

“We will look at how the survey will be administered, what questions should be covered [and] things like the length to determine, ‘How do we get a valid result?’ ‘How do we get something that people are going to want to participate in?’” he said.

Though Blakemore will graduate before the next survey, she said the school needs to take a more active approach to marketing next time. She said she suggests the school use class time for the survey and have peer advocates or other people already engaged in the topic explain to students why taking it is important.

“I think students need to put a face behind something in order to actually get behind [it] themselves,” she said.

Overall, Blakemore said students might not understand how important the survey is.

“It affects tangible change; it really does,” she said. “The information gathered actually can be used to influence policy, and I don’t think students understand that their answers don’t just go into a data bubble somewhere that the college just keeps. It actually is the only way for administrators to get insight to the student’s life.”

McKelvy will be a senior when the 2019 survey is administered and said he plans on taking it next time.

“I would [take it],” he said. “I should have. I just always had other stuff and never put it at the forefront of my mind.”

McCall Mash
McCall is a senior communication major and public health minor who is a lover of new food, the fine arts and storytelling. When she’s not busy editing, you can find the Salt Lake native playing outside, hopping on a plane or enjoying a cup of tea. McCall began her career as a reporter covering education for The Sugar House Journal, she also spent a semester pursuing her passion for geology as a ghostwriter and copy editor with the Utah Geological Survey and experimented as a broadcast news intern with ABC4 Utah. She is eager to spend her final year at Westminster as The Forum’s managing editor.