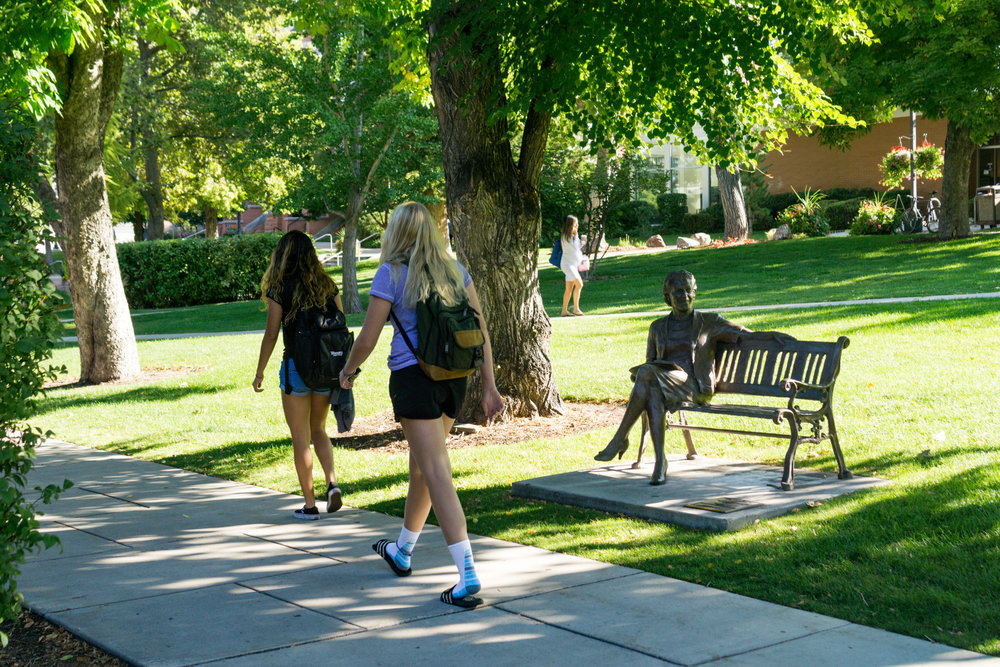 Students walk past the statue of ‘Aunt Em’ on Westminster College’s campus on Monday, Sept. 11. Many members of Westminster’s community said they are unaware of the significance behind the major monuments on campus, such as the memorial benches of ‘Aunt Em’ and Mary Tuck. (Photo by Berin Klawiter)

Amid national debate about the importance of monuments — most notably at the University of Virginia, where the planned removal of a statue of confederate General Robert E. Lee sparked a protest that left one person dead — such conversations are comparatively rare at Westminster College.

“We put people who are important on plinths and pedestals, memorializing them that way,” he said. “And so obviously we are doing the same thing with people that have either been impactful or important in the college’s growth or history.”

But at Westminster, many people — including Keyes — said they are unaware of the significance behind the major monuments on campus, such as the memorial benches of ‘Aunt Em’ and Mary Tuck.

“I think as far as the contemporary viewer, most of those people don’t have any idea who those people are, so they kind of make the same assumption that this is probably someone who was an important donor or family for the college,” Keyes said. “I mean, I don’t even know who they are.”

Professor Michael Popich sits on the Mary Tuck bench outside of Converse Hall, Aug. 29. Mary Tuck and her husband, Ralph, left money to Westminster College in their estate, and many in Westminster’s community are unaware that the couples ashes are buried beneath the bench. (Photo by Stephanie Held)

Michelle Barber-Lyhnakis, the major gift officer in the Kim T. Adamson Alumni House at Westminster, said both women have statues on campus because of their monetary support to the college.

“Mary Tuck and her husband, Ralph, were very generous supporters of Westminster College,” she said. “They left money to Westminster in their estate. That money went into an endowment to help maintain the grounds of Westminster.”

The couple’s ashes are buried beneath the bench so they could be laid to rest in a place they both cared for immensely for, Barber-Lyhnakis said.

Emma Eccles Jones, also known to many Westminster students as ‘Aunt Em,’ is also memorialized on campus as a statue on a bench in front of the School of Education.

Her closeness to the School of Education, located in the lower level of Malouf Hall, represents her regard for the discipline, Barber-Lyhnakis said.

Elaine Sheehan, who has worked in the administration office for nearly four years and does campus tours for prospective Westminster students, also said she was unaware of the story behind the statues.

“I don’t know anything about Aunt Em specifically,” said the senior English major. “I know what the Eccles have done for the school and their role for creating a lot of the buildings we have on campus. I don’t really know specifically her story.”

Sheehan said campus tours don’t focus on the college’s past and instead prioritize current student stories and narratives.

“On the campus tours, we don’t really concern ourselves with the history of the campus because students who are deciding if Westminster is for them don’t really care about has happened to the school in the past or what our history is,” she said.

Alicia Brimhall, a senior ceramics art major, once went around campus for an art history class to seek out and discuss the different statues and art at Westminster. She said the college should work more to educate students and community members about these memorials.

“I think people who have contributed to campus can be remembered by simply acknowledging  them in their speeches, acknowledging them and bringing them up in class — keeping them alive within the student community and faculty,” she said.