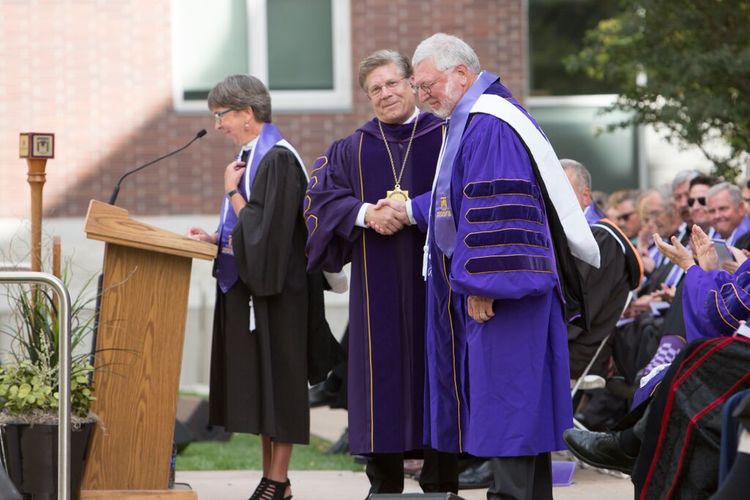 Westminster’s 18th president, Steve Morgan, takes the podium at the college’s inauguration celebration on Sept. 26, 2015. Morgan will retire at the end of the 2017-2018 academic school year after serving as nearly three years in Westminster’s chief executive position. (Photo by Blake Bekken)

After 37 years at Westminster College and three years serving in its chief executive position, President Steve Morgan announced Thursday his plan to retire at the end of the 2017-2018 academic school year.

Morgan, Westminster’s 18th president, spent most of his nearly four decades at the college in a variety of administrative positions and stepped into his current role in July 2015.

“It has been a marvelous experience for me to have spent most of my professional life at Westminster,” he said in a video message sent to the student body via email. “This was not a position I sought after, but one I accepted out of love for the institution and this community.”

Ben Pok, a junior and Westminster’s student body president, said he has built a close personal relationship with Morgan over his past two years in ASW.

“He has been such a positive force in my life as a person, a student and president that our one year of bonding and relationship building will definitely be missed,” Pok said. “But I’m really happy for him because it’s been a hard time to be in leadership and he’s done a great job.”

Pok said he’ll miss Morgan’s visibility on campus and his propensity for considering others’ viewpoints as the college has worked to tackle issues of diversity on campus.

“He listens,” Pok said. “He has not always been the most… in the loop of social issues affecting contemporary society, but he was always willing to listen every time that there was an issue that arose.”

The college will form a national search committee to find Westminster’s next president, who will take the helm for the 2018-2019 school year. The committee will include one student, one alumnus and two faculty members, among others.

“Overall, we hope that the search process proceeds quickly, but we also plan to be very deliberate and intentional in the process to ensure that we do our best to attract the most highly qualified candidates,” said Annalisa Holcombe, the chief strategy officer in Morgan’s office. “If we meet our overall goals, we anticipate that we will be able to announce a new president by March 2018.”

Holcombe said the committee will hold a listening session for students at the end of this month so they can provide input on what they are looking for in a new president.

Morgan said in the video he is confident that Westminster’s future is “poised for a new leader to take the helm and accelerate the pace of our efforts” but said, when that happens, that he doesn’t anticipate his relationship with Westminster to end.

“After commencement in May, I will be retiring from my day to day work, but I will never retire from my association with Westminster,” he said. “Sandy and I are anxious to begin the next chapter in life, but we also look forward to our continued involvement and pledge support to the next president and the future success of Westminster.”