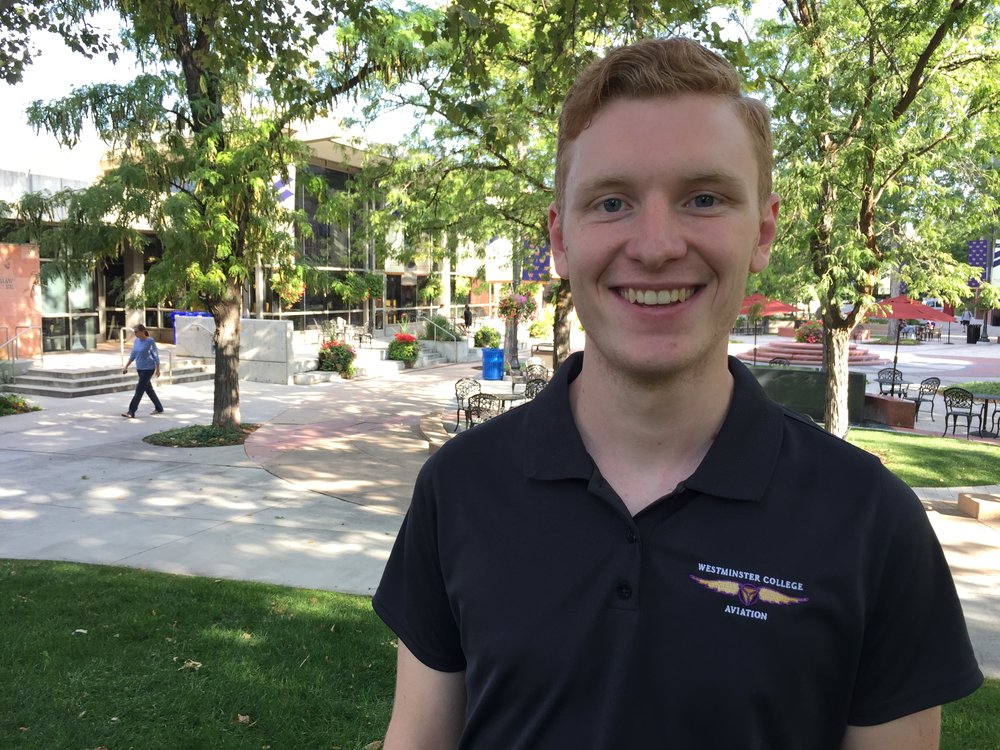 Sean Culligan, a senior flight operations major returns back to campus after a morning of flight training at the Salt Lake City airport. Culligan hopes to become an airline pilot post graduation, and said the student loans are worth doing what he loves. (Photo by Lily Wolfe)

The average student who graduated from Westminster College’s class of 2016 walked away not only with a diploma but also with $30,442 of student debt, according to a report published by LendEDU.

Westminster has the highest student loan debt per borrower out of eight universities in the state, the report shows — but some students said they don’t understand what that will look like when they graduate.

“It’s kind of intangible,” said Rosanise Odell, a senior environmental science major, who declined to disclose the amount of her student loan debt. “It’s more money than I’ve dealt with in my life, but at the same time I know that it’s lower than most people’s debt when they graduate.”

Nationally, the average 2016 graduate had $16,723 in student debt, according to LendEDU.

Nicole Tyler, a senior English and creative writing major, estimates they will leave Westminster with $15,000 in student loans and said graduate school poses the threat of more.

“On the one hand, if I go to grad school immediately that puts off my [undergraduate] debt because I’m still in school,” Tyler said. “On the other hand, you need money to go to grad school, and that means I need to work.”

“I plan to go into STEM fields for graduate school and most people I’ve talked to said in the scientific field if you are paying to go to grad school you are doing it wrong,” she said. “If I had to pay for a graduate degree, that would definitely be another consideration.”

Jon McKenzie, a coordinator in Westminster’s Center for Financial Analysis, said there isn’t one ‘best’ strategy for paying off student loans. However, he said there are some actions to avoid.

“The biggest mistake would be taking out too much,” he said.

McKenzie said he advises students to realize they have to pay those loans back and should look for ways to avoid borrowing money if their degree won’t lead to a higher-paying job upon graduation.

“[There is] nothing wrong with part-time jobs and just looking for ways to cut costs,” he said.

To manage her student debt throughout her years at Westminster, Odell said she has paid off accrued interest on her loans.

“I want to start out after graduation with just the exact amount I took out and not the amount plus a lot of interest,” Odell said. “As far as my actual monthly strategy? I haven’t thought about that yet.”

Sean Culligan, a senior flight operations major, estimates he will graduate with upwards of $100,000 in student debt.

“As an airline pilot, we say we’re in it for the long haul because while we’re paying an exorbitant amount of money, we will be earning it back,” he said.

As a flight operations student, Culligan said he pays for his flights, certifications and ground lessons, in addition to Westminster tuition. He said students are told their total tuition and fees will most likely cost double that of other students but said if you love what you do the loans will be worth it.

“Don’t let financial aid or tuition deter you,” he said,

Tyler also said student loans are both positive and negative.

“In one hand, it’s how invested I was in my education,” Tyler said. “On the other hand, it’s a terrifying thing that’s going to control my life for ‘x’ amount of years. If my education doesn’t get me something within my field or [a job] that’s a livable wage plus paying off my student debt, then it’s probably going to feel like all of this was a big waste of time.”

One of the best things recent graduates can do to tackle their student loans is to pay more than the minimum, McKenzie said, referring to a handout in the Center for Financial Analysis written by Jeffrey Trull, who is the content director for the website Student Loan Hero — a tool that aims to help students manage and pay off their debts.

Trull’s ‘Guide to Paying off Student Loans Faster’ includes a list of 14 strategies for recent graduates to manage student debt. The list ranks the effectiveness level of each strategy from low to high, with three rated as highly effective.

First, Trull recommends students consolidate and refinance their loans to decrease the interest rate and let payments go toward the loan and not the interest. Second, they should apply any raises to their student loans rather than purchasings other items with that ‘extra’ money. Finally, Trull advised graduates trim their budgets — especially if increasing their income isn’t feasible.

What should students not do? Increase their standards of living so rapidly, McKenzie said.

“We think we want everything now, but it’s okay to wait,” he said.

Westminster College’s Financial Aid Office did not respond to multiple requests for comment.