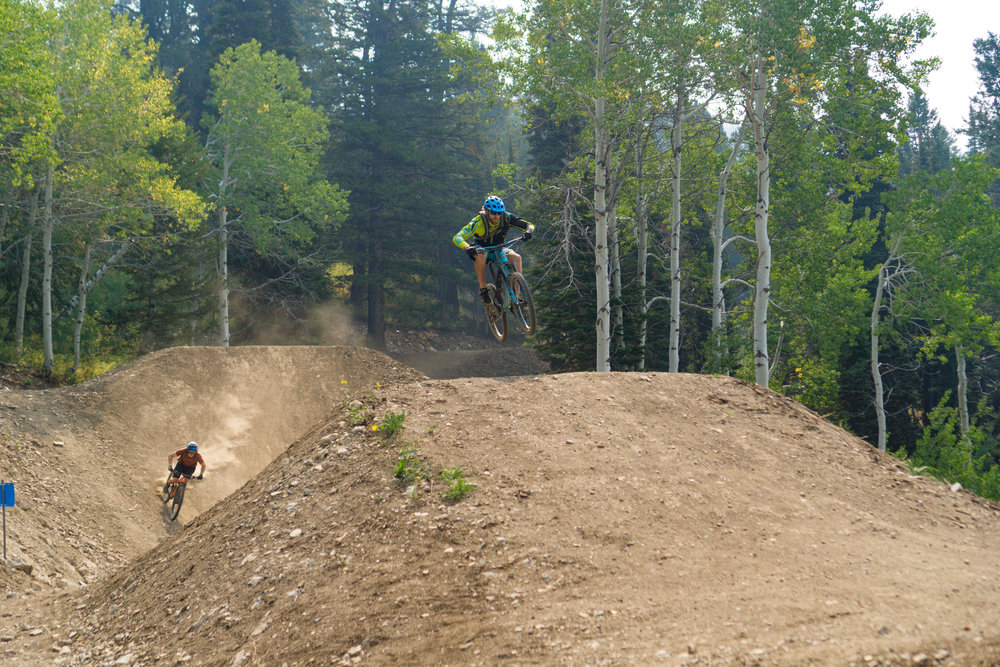 Logan Gill follows Josh Strutz on mountain bikes through a line of jumps in Grand Targhee, Wyoming. When asked how he connects with younger peers he said, “I would say I am still a bit of a kid at heart. I like to play and be silly laugh hard and play hard.” (Photo by Berin Klawiter)

After years spent growing up in the woods of Homer, Alaska, Josh Strutz decided it was time to go to school.

Strutz, now a 29-year-old senior nursing major at Westminster College, said he’s been mistaken for a teacher more than once. Though he had a late start entering college, he said he makes the most of it. Strutz said he initially felt out of place amongst so many younger students, but the avid mountain biker and snowboarder said he’s now met most of his friends through these activities.

“He finds his way around it,” said Logan Gill, a senior business management major and Strutz’s roommate. “He doesn’t even consider it when he finds other people who enjoy the same activities. That’s a much better connection than worrying about how old you are.”

Though Strutz said there are ups and downs to being a non-traditional student, he said it’s all about the mindset, and he advised Westminster students in similar positions to remain true to themselves and follow their hearts.

Strutz sat down with the Forum to talk about his perspective as a non-traditional student at Westminster. This interview has been lightly edited for clarity and conciseness.

Q: What is it like to attend Westminster as a student who’s older than most?

A: It’s interesting. It has its ups and downs. There is positive things to everything. Sometimes it’s difficult to relate with other students just because there is an eight to 10-year age gap, but other times it’s really refreshing. You learn a lot from people of all different ages and everyone has something to contribute no matter how old they are. You can’t judge someone off their age.

Q: How does being older than your peers affect you in the classroom?

A: Here at Westminster, really not too much. The nursing program actually has a pretty wide range of age groups. I bet our oldest student is in their 50s all the way down to probably 20.

Q: Do you find it easier to relate to older or younger peers?

A: To answer your question black and white, I would say older students. I can easily converse with them. There are a few younger ones [who] I like their energy and excitability. But I have an easier time speaking with people of a similar mindset. Age is not so much of a factor.

Q: What other ways are you affected as a non-traditional student around campus?

A: I’m walking through campus and I find myself thinking ‘Wow are these freshman? They look like they are still in high school.’ And they are probably looking at me the same way, like, ‘What is this old guy doing on campus?’ I think I’ve been mistaken for a teacher more than once.

Q: What are some of the advantages to being an older student?

A: If parents aren’t a factor in financial support then I think it is an advantage being an older student, because I’ve had years to develop skills and be able to work my way up to get better jobs to make more money so I can support myself through school.

Q: What are some of the struggles you face as a non-traditional student?

A: The No. 1 struggle was the first year coming here because the older students have family and the younger students were all playing and I was pretending like I liked something. I felt a little lost for a little while. [It was] a new place [and] I was surrounded by younger folks who wanted to go out every night. I could feel that wasn’t me in my heart but I didn’t know what else to do.

Q: What helps you connect with younger peers?

A: Similar interests. I would say I am still a bit of a kid at heart. I like to play and be silly laugh hard and play hard. I try to have as open a mind as possible.

Q: What advice would you give other non-traditional students?

A: Remain true to yourself and follow your heart. You came here for a reason. You’re paying to come here, so use your education as best that you can.

Berin Klawiter
Berin is a senior communication major and self-proclaimed photography and videography nerd. When he isn’t behind the lens, he can be found enjoying the Wasatch Mountains through mountain biking and snowboarding. Berin has worked in photo and video for over four years and currently works as a freelance photographer and videographer. He is excited to share stories of the Westminster community as the Forum’s video and podcast director.