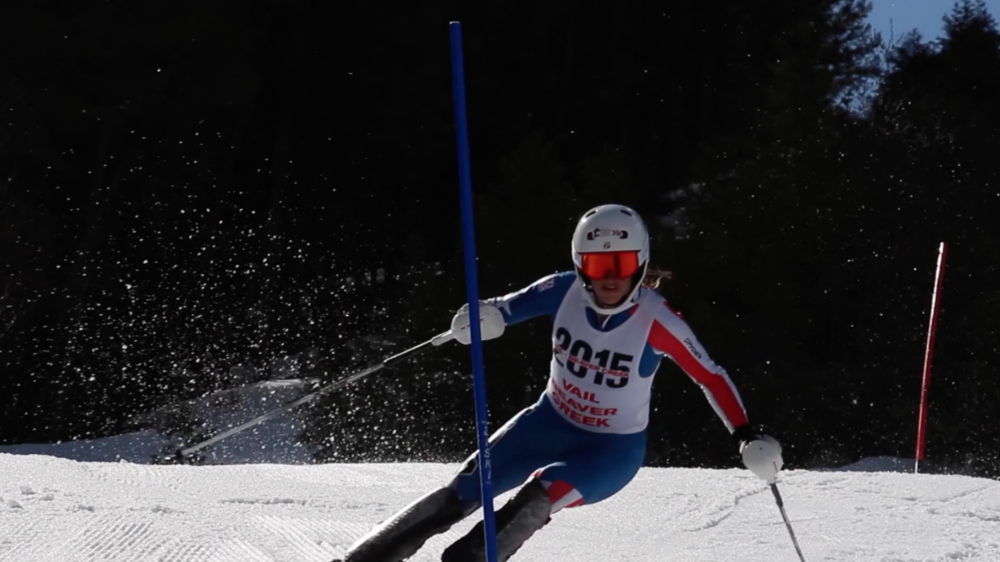 Hailey Duke, a junior finance major at Westminster College, skis through a gate on her property in Sun Valley, Idaho in the spring of 2014. Duke’s property in Sun Valley served as a place for her to prepare and practice for the 2015 Women’s Alpine World Cup after she was cut from the U.S. Ski Team in 2012 because of complications associated with a brain tumor. (Photo courtesy Hailey Duke)

Before Hailey Duke became a student at Westminster College, she spent almost a decade traveling the world as a member of the U.S. National Ski Team and as an independent competitor, winning multiple major international races.

However, her path to success hit a roadblock when Duke, 31, was cut from the U.S. Ski Team in 2012 because of complications associated with a brain tumor. But the junior finance major said she wasn’t ready for her career to end — so she fought her way back to the 2015 Women’s Alpine World Cup and World Championships as an independent competitor.

“I knew that my career was going to be decided by me and not by other factors,” she said.

Duke’s specialty was slalom, an alpine skiing discipline in which a skier quickly turns around poles and gates as she races down a mountain.

Troy Price, a junior race program director at Rowmark Ski Academy, said Duke worked up the ranks on the national team “to become one of the best slalom skiers” and then overcame further trials as an independent competitor.

“The biggest challenge for an athlete moving from the national team to independent is that of resources and fundraising,” Price said. “It put a lot more on her plate to not only balance what she needs to do as an athlete… but also to start up the funding. The cost is very high and so the responsibility to create your own fundraising is quite large for an independent athlete.”

Duke created The Hailey Duke Project, an independent organization, to raise the money she needed to get back to the World Cup and sold people on her dream to race at the NorAm Cup, World Cup and the Olympics again.

Though her whirlwind decade of competing is behind her, Duke hasn’t left the skiing industry. She coaches at Rowmark Ski Academy and has begun engineering a unique style of ski boot that is custom fitted differently than the majority of the current boot for skiers who haven’t been able to find one that fits their style of skiing.

The Forum sat down with Duke to talk about fundraising her way to the Women’s Alpine World Cup, her experience at Westminster and her new work in the ski industry. This interview has been lightly edited for clarity and conciseness.

Q: What was it like going to the Olympics?

A: [In] 2012, I was cut from the U.S. Ski Team, but I managed to get my own World Cup spot still for the following season. That was through the NorAm Circuit, so I decided to go through it. [I told myself], ‘I am not done racing.’ I knew that the end of my career was going to be decided by me and not by other factors. Going into that fall, I found out I had a tumor on my pituitary and I ended up declining when I had to have brain surgery. I lost my World Cup spot again, and the Ski Team wasn’t open for me. I knew I had to work my way back up, so I created my own team: The Hailey Duke Project.

Q: What did the Hailey Duke Project entail?

A: I went through and did all my own fundraising to get my own coach so we could both travel to whatever [race] we needed to go — whatever qualified me to get to that World Cup start again. The Sochi Olympics were coming up, so that was a big carrot dangling in front of me, and I felt that I had something to prove for sure. I earned my spot for the World Cup the following year and finally had a full independent season where I got to race. That was all fully funded by myself and that was extremely hard but probably one of the best learning experiences of my life. I went to world champs and finished out that World Cup season and retired shortly after. I knew another independent year would have probably killed me.

Q: How did you end up at Westminster?

A: Westminster and the U.S. Ski Team have a nice partnership. As long as you started as a current member of the U.S. Ski Team at Westminster, you can go back and get your undergrad with the tuition covered for you. I jumped in and did that with a couple of my teammates and we took some awesome classes, and once I actually retired I knew that I wanted to go to college and Westminster was definitely the place to go — especially with the quality and having it be available. I just lucked out.

Q: What are your plans for the future of your ski boots?

A: We definitely work outside the realm of what everyone else does, and it has been working really, really well for the last two years. Now I am trying to figure out how to make [the boots] on a bigger scale so I can help the next set of athletes and skiers [who are] having the same problem I did but having no idea that it was actually happening to them.