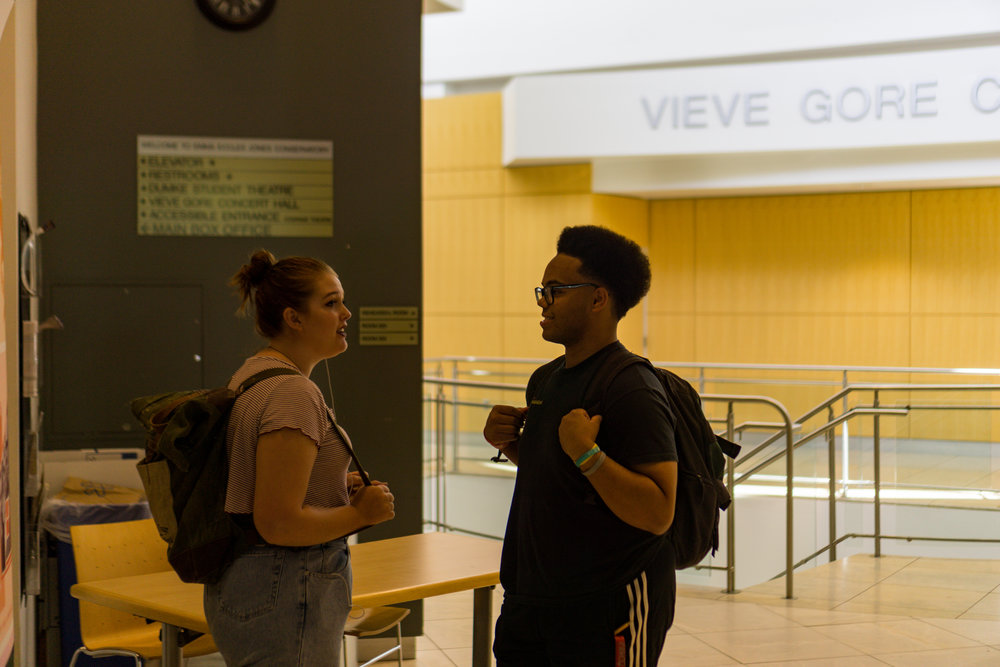 Sam Allen and Sam Miller discuss the stress of auditions in the Jewett Center for the Performing Arts at Westminster College. During Westminster’s week-long theater audition process, each actor or actress has to show they’d be good in one, or all, of the shows for the upcoming school year.  (Photo by Berin Klawiter)

While his peers in Westminster College’s theater program auditioned for the entire year’s lineup of shows during the first week of classes, Thomas Reilly was at a wedding.

That means the senior business major and theater minor will work behind the scenes during his last year of college instead of taking the stage.

“It gets a little crazy,” Reilly said. “Personally, it’s been a little tough for me because I have a different major. I’ve never had an audition schedule that didn’t conflict with my other classes.”

During Westminster’s theater audition process, each actor or actress has about three minutes to read a monologue to show they’d be good in one, or all, of the shows for the upcoming school year. After the initial auditions are over, the directors decide who they want to audition for individual roles in each show and call them back for longer, more focused auditions, Reilly said.

Some students are called back to audition for a role in each play and sometimes for multiple roles — which can add up to a lot of work.

“As a freshman it was really intimidating having to audition for all the shows at once,” said Kallie Filanda, a senior theater major. “But now that I’m a senior and trying to audition for other shows in the area, I definitely appreciate and see the value in it.”

Filanda said the theater department recently started holding all the auditions for the year during the first week of classes to make it easier for students to also audition for plays off campus that could offer them professional experience.

“It may seem really hectic from the outside,” said Emma Thompson, a sophomore who helped run auditions this year, “[But] we made it really organized because the main goal is to reduce the stress on the actors.”

Though the process looks to reduce impact on older students, it may make it more difficult for first-year students.

“Freshman year I feel like it’s harder because you have to find a way to do all the orientation stuff like the Title IX meetings, [too],” said Alvaro Cortez, a sophomore theater major.

Cortez also said some students from outside the theater program audition for shows — and wouldn’t have a chance after that first week if they later became interested.

He said he would like to see more students from outside the program in auditions and plays because they can “bring something so fresh that someone who’s been doing theater already kind of doesn’t have.”

Thompson, Reilly and Filanda agreed that while doing auditions this way can cause problems and stress, it makes the most sense. Since the initial audition is their one shot to show the directors what they can do, if they blow it — or miss it, like Reilly did — they may spend the year offstage.