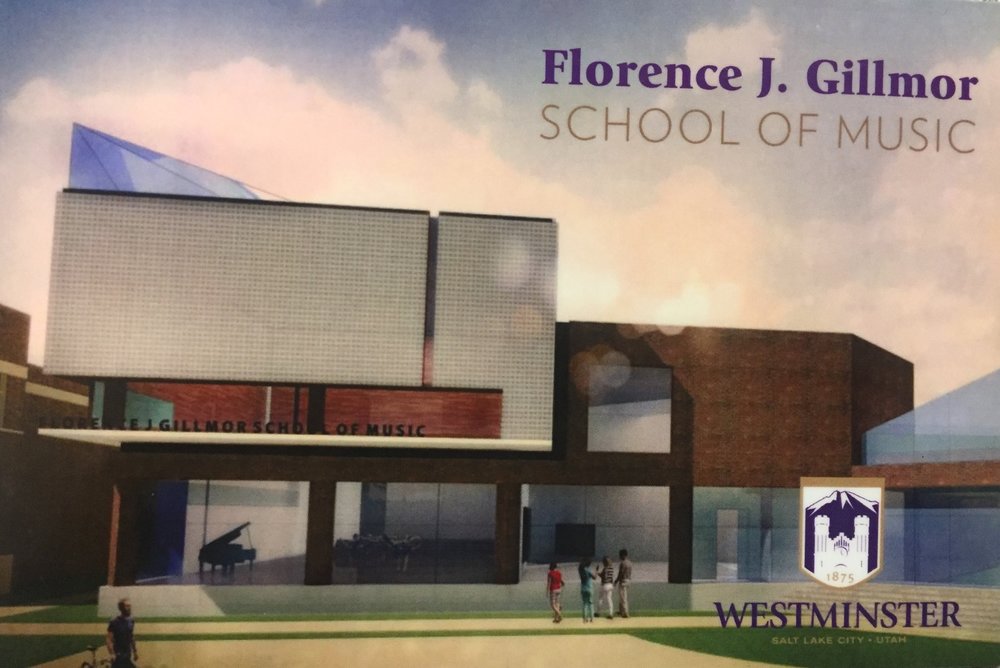 A postcard shows construction plans for the new Florence J. Gillmor School of Music, which will be constructed at Westminster College in 2018. The new structure will be named in honor of a 1938 graduate of Westminster’s music department and the foundation that will support the majority of the funding. (Photo courtesy Office of Advancement)

The last time Westminster College expanded its performing arts building was in 2004. But since then, the college’s fine arts programs have grown rapidly — with the addition of a dance program, a music major, an a cappella choir, an opera program and a chamber music program.

Because of the addition of new programs, some groups have had to use off-campus facilities to practice.

But coming sometime in 2018, those capacity issues may become a relic of the past when construction is expected to begin on a new fine arts structure between the Jewett Center and Payne Gymnasium.

“This is a moment I am pretty excited about,” said Nina Vought, chair of Westminster’s dance program, which has had to practice off campus since its inception three years ago. “The students are just so thrilled always to come to campus. When they get to come to campus, it is a wonderful moment in their studies. It is going to be fabulous.”

The Florence J. Gillmor Foundation — which gives hundreds and thousands of dollars each year to Westminster’s fine arts department for scholarships, programs and instruments — donated $3.6 million dollars in spring 2016 toward the construction and expansion of the existing performing and fine arts building according to an email from Jeff Driggs, director of foundation relations and institutional advancement.

This new structure will be named the Florence J. Gillmor School of Music, in honor of a 1938 graduate of Westminster’s music department and the foundation that will support the majority of the funding.

Linnea Horvath, first year dance student, practicing barre at the Ballet West Studios at Trolley Square Sept. 18.  Once the Florence J. Gillmor School of Music is constructed, Westminster’s dance students and teachers will no longer commute to classes at the Trolley Square Ballet West studio, which is roughly a 10-minute drive from campus. (Photo by Katie Felice)

The new $13 million dollar structure has also received $2.6 million from the Emma Eccles Jones Foundation. The college has raised $6.8 million in gifts and pledges so far, Driggs said.

Once the new building is constructed, Westminster’s dance students and teachers will no longer commute to classes at the Trolley Square Ballet West studio, which is roughly a 10-minute drive from campus.

“I would love something on campus,” said Cambri Fox, a sophomore dance and pre med major. “They have been telling us since we were freshman that we would have a building on campus.”

Fox also said the studio at Trolley Square is nice but has its downsides.

“I feel like it separates the dance program from campus, so people don’t know about us as much,” she said.

The new space may help Westminster’s dance students feel more represented on campus, as their performance studio will be on the ground floor, with windows and glass doors wrapping around the building so outside audiences can see in.

The 25,000 square foot expansion will be three stories and will include a 100-seat music hall for recitals, master classes, chamber music productions and other performances, as well as an art gallery and reception spaces for art exhibits. The building will also include a practice hall for music ensembles, student-directed plays and one-act shows as well as 18 music practice rooms.

Vought and other theatre and music faculty have worked closely with the architects in designing the new addition and said they’re excited to see their work come to fruition — and to see their programs expand even further.

“It is a little hard to recruit for now without space on campus,” Vought said about the dance major. “But it’s a phenomenal program, and once we get space on campus it is going to take off.”