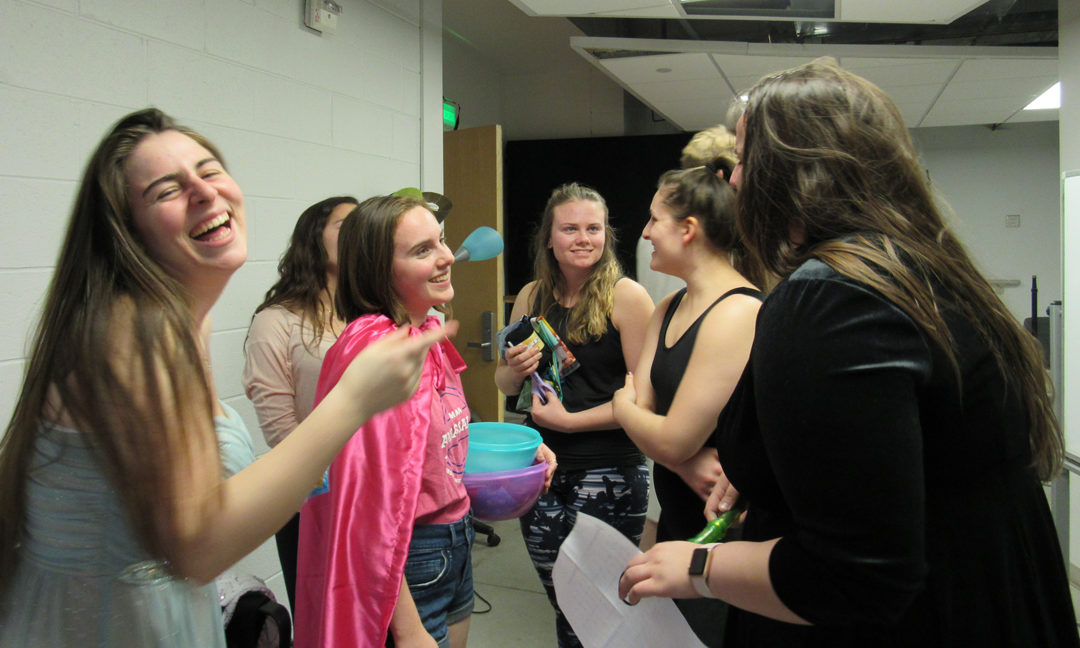 Mx. Westminster contestants run through a final dress rehearsal of the pageant backstage in the Vieve Gore Concert Hall at Westminster College on Feb. 7 . Each contestant was part of the annual Mx. Westminster calendar fundraiser, from which all proceeds are donated to the Rape Recovery Center. (Photo by Sam Reynoso)

Reiger said she has wanted to teach the subject for a while and thought the Mx. Westminster pageant would be a fun way to start. For her talent portion, she confidently stepped onto the stage in a bright pink Planned Parenthood ambassador T-shirt and cape with bowls of lube, dental dams, and condoms ready to throw to the audience. In under five minutes, Regier taught a comprehensive sex education lesson that many students didn’t get in high school. 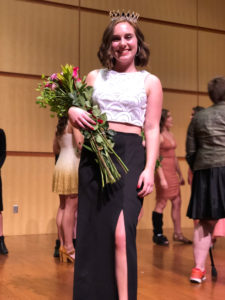 Maggie Regier, a sophomore custom major in arts administration and public health, was crowned 2018 Mx. Westminster on Feb. 8 in the Vieve Gore Concert Hall at Westminster College. For the talent portion of the pageant, Regier taught a sex education lesson in under five minutes. (Photo by Sam Reynoso)

The presentation highlighted three main principles: consent, safety and pleasure. Regier playfully moaned and seductively spoke about the importance of receiving a daily dose of “Vitamin O” — orgasms. She gave the audience creative ways to ask for consent, warned them about “super gonorrhea” and used a diagram to remind the audience where the clitoris is.

Her confidence and enthusiasm for sex education ultimately won the judges over.

“It was consistent that ‘Wow, Maggie is just killing it,’” said Mx. Westminster judge Ryan Cook, director of student involvement, leadership and orientation. “I think [the sex education lesson] was something different, out of the wheelhouse of [traditional talents]. It was, ‘No, my talent is comfortably talking about something that a lot of people are uncomfortable talking about.’”

Reiger said she wants to pursue employment at Planned Parenthood and push for comprehensive sex education across the country. She sat down with The Forum to talk about the Mx. Westminster pageant and her passions for women’s health and the arts.

Q: What inspired you to be part of Mx. Westminster?

Q: What was the process of the Mx. Westminster pageant like?

A: It was so much fun. It was a really great group of people. Cambri [Fox (Ms. September)] and Katelynn [Killian (Ms. February)] taught us a dance and we had a lot of fun with that. Lauren  [Dunphy (RHA events chair)] was in charge of herding us like a bunch of cattle and it was really fun.

Q: What were you feeling throughout the pageant?

A: I had a lot of fun during the opening dance. I was on dance team in high school for like a year. It’s been a long time since I’ve done that, so I had a lot of fun. But before I went on to teach the sex ed, I definitely was super nervous. It was definitely one of the edgier things I’ve ever done because it was like, ‘Oh, I’m about to teach sex ed to the president of a college. Cool. That’s great.’ It was fun in the intro. Everyone was wearing activewear, and I went out in my pantsuit with a spreadsheet thinking everyone was going to hate me, but I got a lot of cheers, which was a pleasant surprise. I was a little bit all over the place. Also, I felt definitely, ‘This is really fun’ and I felt really good about myself and everyone was competing. It was very confidence building, which is not what I anticipating; I thought it was going to make me feel really insecure.

Q: Tell me about presentation during the talent portion.

A: I wanted to do the comprehensive sex education you didn’t get in school in under five minutes. I met a lot people at Westminster who didn’t know anything about birth control or protection or healthy relationships and I was like, ‘This is ridiculous. We shouldn’t be college students and not know any of this information.’ So I wanted to do a quick and dirty version. 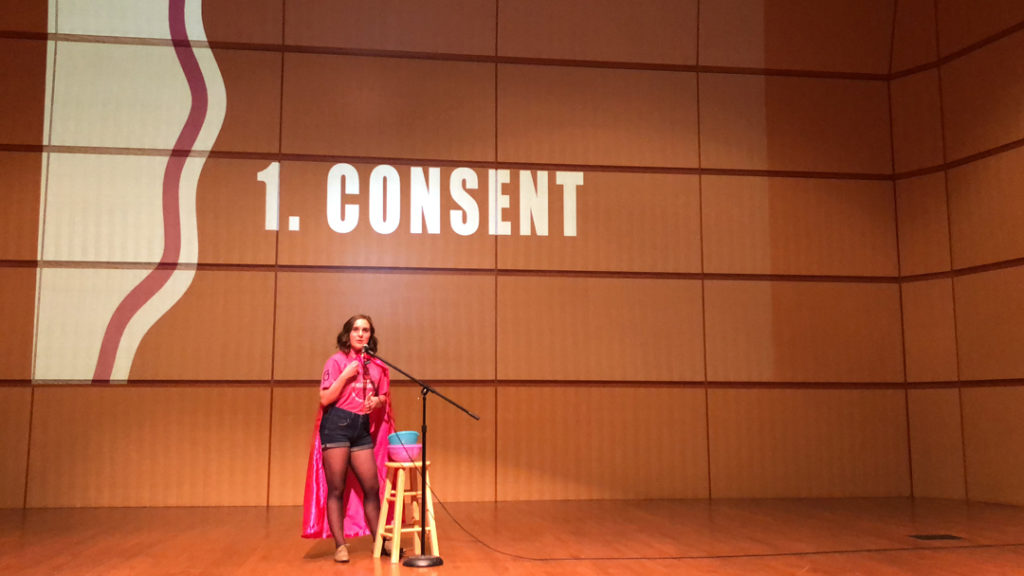 Maggie Regier, a sophomore custom major in arts administration and public health, reminded the audience on the importance of consent, safety and pleasure when it comes to sex during the talent portion of the Mx. Westminster pageant on Feb. 8 in the Vieve Gore Concert Hall at Westminster College. Regier was crowned the 2018 Mx. Westminster. (Photo by Sam Reynoso)

Q: Why do you think it’s important for college students to know about sex?

A: Because it is! It’s so important in life to have a comprehensive sex education because sex is a part of life, no matter when you decide when you want to engage in sexual activity — if that’s while you’re in college or if you want to wait until marriage, that’s awesome. They’re both empowered choices, but that’s what they should be is empowered choices. Knowledge and education and information is a way to make these choices empowered ones. Even if you decide to wait until marriage, if you know how it works and you know how it works, then you can communicate with your partner and you can have — sex is really good for you. Endorphin rush is really good for you. You should be able to enjoy it and not be stressed.

Q: What do you want to do with your custom major?

A: Well the goal as of now, because I’m designing my major, is to work in non-profits in local communities to make an impact through arts and women’s health. And I have so many passions for civic engagement, it’s really hard to focus. So I’m kind of making myself choose women’s health, and so I just I think the arts and sex ed are both two of my biggest passions and so I’m going to combine them and use that to make a difference in small communities.

Q: How do you think the Mx. Westminster title will help your future endeavors?

A: I think maybe I’ll show up to SLCC [Salt Lake Community College] and say ‘Hey, can I give a sex talk? I’m Mx. Westminster.’ I think it’s just a fun title that says I helped raise money for a good cause. I’m hoping that I’ll be competing in some Mister Utah state competition and I think if I go as Mx. Westminster, I think that will shake things up a bit in a state that could have things shooken up a bit.