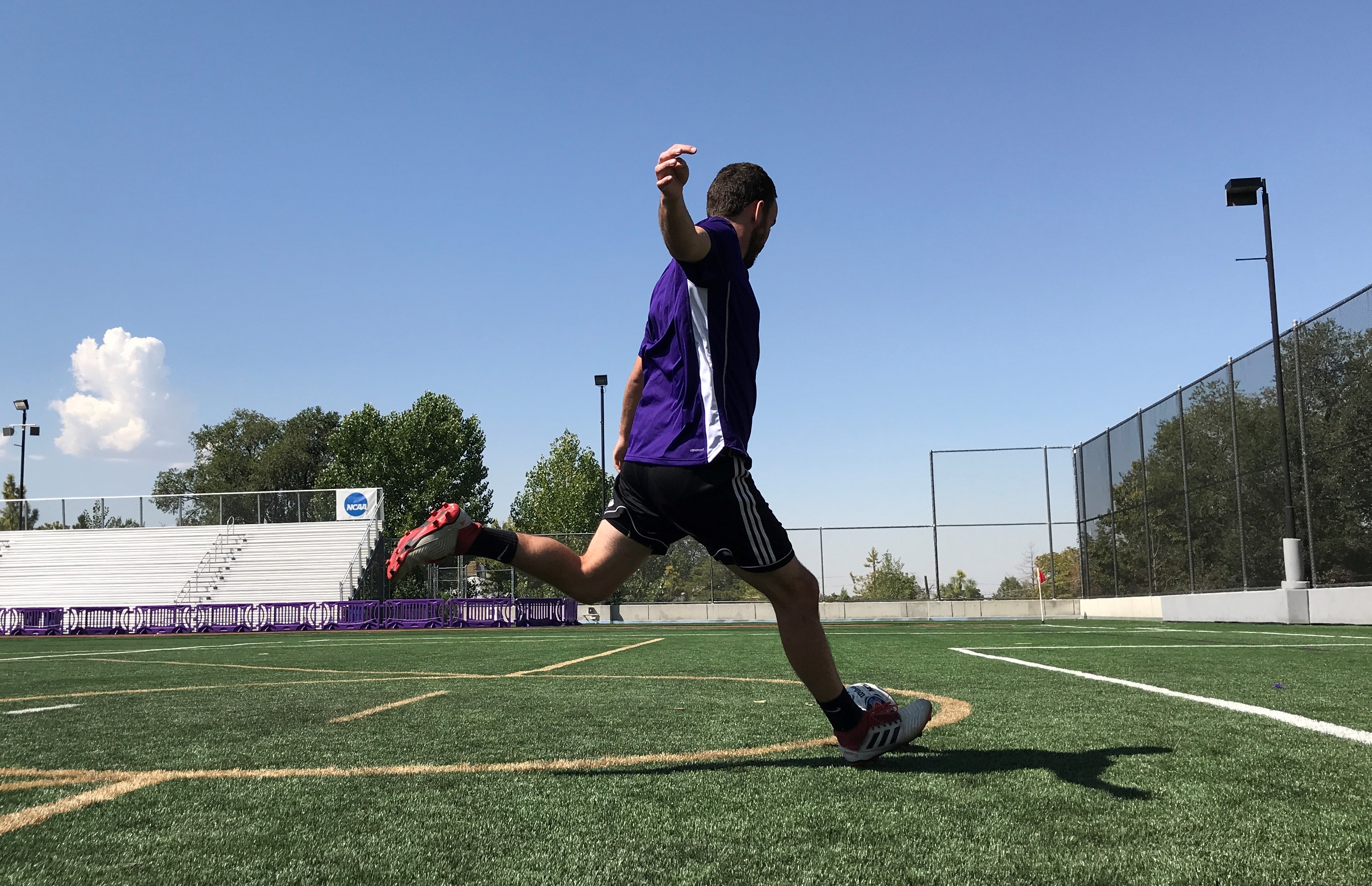 Senior goalkeeper Max Medley practices goal kicking on the new turf before practice on Sept. 7. Medley said talks of a new field have been floating around since his arrival in 2016. (Photo by Sicilee Williams)

New artificial turf was installed on Dumke field this summer to improve the health of student athletes and control the temperatures on the field, according to members of Westminster College’s athletics department.

The turf and track lanes were installed in June after a petition by student athletes and internal discussion by the athletic department. This is the second field ever installed on Dumke field, as the original field was installed in 2006.

One reason the field was replaced was to improve student-athletes physical health, according to members of Westminster athletics’ department.

“I think that injuries of athletes who used the field had a correlation with the bad field,” said Assistant Athletic Trainer Josh Juarez. “I feel that a majority of people had sore knees because they were running on pure concrete.”

Juarez has worked for Westminster’s athletics department for the past four years. He said the new field may take a few rainfalls to completely settle and even out but the wait is worth it.

Student athletes who use the field said they are also happy for the change.

“The ground feels softer and the turf is easier on your body,” said Max Medley, a senior and goalkeeper for Westminster men’s soccer. “It doesn’t feel like concrete every time you step on it like the old one did.”

Medley has played for Westminster for the past three years while earning a justice studies degree. He said talk of a new field has floated around since his arrival in 2016.

Fields are generally supposed to last 10-12 years before needing replacement, according to FieldTurf, the company Westminster purchased the new field from. And the old field was 12 years old when the college replaced it. 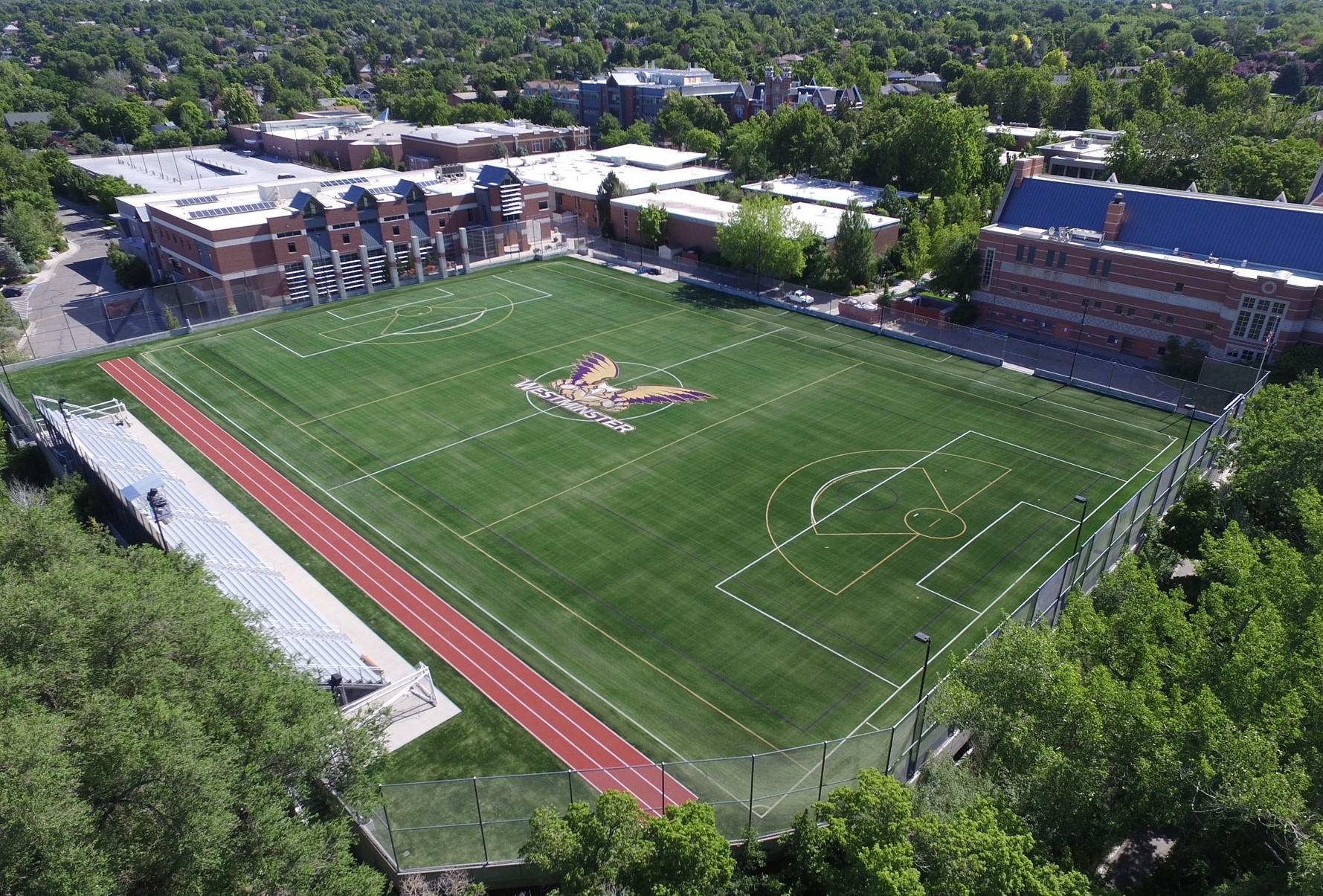 An aerial view of the Dumke Field’s new artificial turf summer 2018. Student athletes hope the new turf will decrease the number of athlete injuries during practice and competition as well as maintain a cooler temperature. (Photo courtesy FieldTurf)

“We researched a lot of fields and it is one of the top products on market,” said Wyatt. “CORE is a high quality product and is the highest tested product of FieldTurf. We know the durability is really good.”

Westminster installed another layer under the field “to help with compression”  which should reduce continual pounding, said Wyatt.

Not only is the look and feel of the turf improved, but the new CORE technology will also solve the temperature problems associated with the old turf.

“During preseason, when it was the middle of summer and we were practicing in the middle of the day, the [old] turf would burn your feet,” goalkeeper Max Medley said. “If you were standing on the field too long you’d get burns through your cleats.”

The CORE with CoolPlay Turf mixes green colored beads in with the regular turf beads to reduce the heat of the field, according to FieldTurf.

There were rumors amongst student athletes that the new field was installed because Westminster became an official member of the National Collegiate Athletics Association (NCAA) Division ll this summer.

“That is not necessarily true,” Wyatt said. “Regardless, we want to provide quality facilities for our athletes. Every summer we have projects, look for funds and try to make it happen.”

The new turf brings hope of benefiting future athletes of Westminster as well as current athletes, according to Juarez.

Installing the new turf field was not cheap nor easy and required an extensive amount of planning, but the benefits outway the cost according to Juarez.

“We do care and we want all of our athletes to feel that they are cared about,” Juarez said.