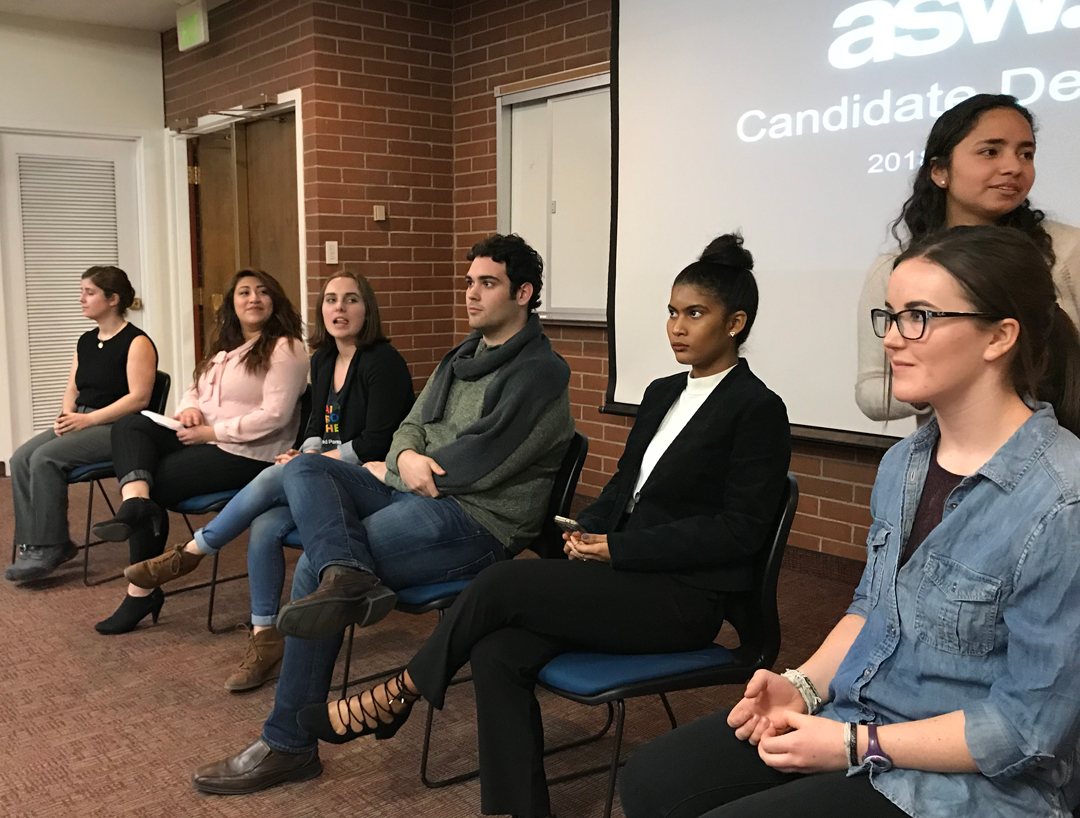 ASW election candidates prepare to answer questions from the election committee and audience members in Malouf Hall 201 Wednesday night. Candidates were specifically asked how they would create a more diverse and inclusive campus — particularly related to issues of hate speech. (Photo by Traci Kenner)

At ASW’s candidate debate Wednesday night in Malouf Hall 201 at Westminster College, applicants focused on how they would work to create a more diverse and inclusive campus.

Students and the election committee asked questions specifically about how candidates would handle hate speech on campus that comes from other members of the community — particularly in light of white supremacist posters that were placed around campus last semester.

“I’ve dealt with these things my entire life,” said Lia Baez, a first-year ASW Chief Justice candidate. “I’ve dealt with white supremacy, I’ve dealt with racist comments, microaggressions, all you can think of. So I feel like in addressing this, I would just make sure that rights aren’t violated — and that includes free speech. Because yeah, people have the right to share their opinion, but hate speech is unacceptable because hate speech is not protected under the constitution.”

Max White, Baez’s opponent, said he is planning to concentrate on reporting what student government does to be more accessible to the student body and so future teams can refer back to past actions. Baez noted she had plans to prioritize transparency and civic engagement, as well as diversity and inclusion.

“I’m really excited to work on improving campus sustainability and diversity and inclusion, as well as campus accessibility,” she said. “I’d really like to work on building a community of people who care about everyone around them.”

Jazmin May, Kornhauser’s opponent and a reporter for The Forum, said she wants to work on improving communication and student resources.

“There’s kind of really no way for them to not win,” said Gabriella Sanchez, ASW speaker of the Senate.

Sanchez noted that there are still several Senate applications open because not enough people applied.

“We have pushed our Senate elections back a week in order to increase candidacy for that because we have 16 senate positions,” Sanchez said. “Elections, in general, has definitely been struggling over the past couple years in ASW, just with like student involvement.”

The struggle to get students to run in elections is one issue, but another “is voter turnout,” Sanchez said. Student board members spent the week encouraging voting through tabling and worked to make the opportunity more obvious in Canvas.

Voting closes on Canvas on Friday at 5 p.m. Listen to the entire debate here.