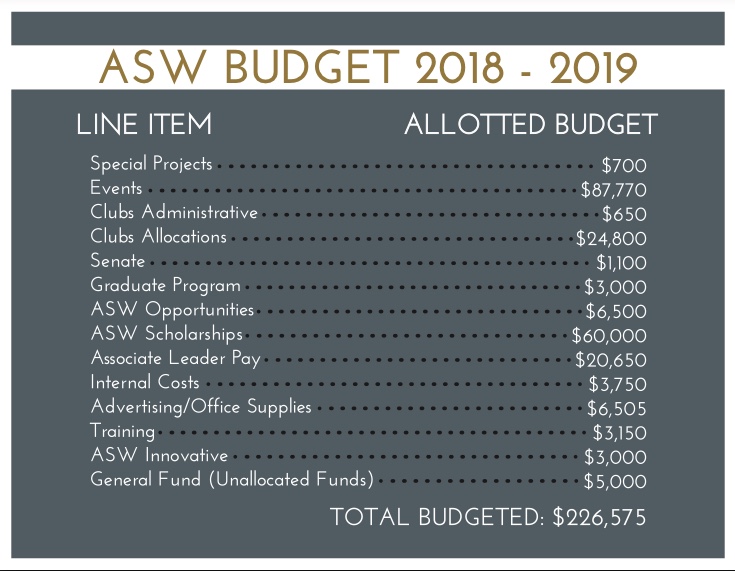 With a budget significantly smaller than that of last year, student leaders are forced to make hard cuts and find other sources of funding while still best serving the student body they represent.

The budget fluctuates each year due to enrollment numbers. Each full-time undergraduate student pays $55 into ASW in student fees every semester, and part-time students are billed based on their credit hours.

This means that the less students enrolled for classes, the less funding ASW receives for its projects and initiatives.

Since the budget is funded by students, ASW President Jazmin May said it is important to each branch of ASW that priorities align with student needs. May said the goal for ASW is to sponsor events, resources and opportunities that will directly benefit students.

“What we do is for the students,” said May, a senior communication major. “What we’re doing with the money has to benefit them.”

During the two to three hour annual budget meeting, the representatives of all the ASW branches come together to discuss the financial needs of each branch. They compare their proposals with one another as well as with the previous year’s budget.

The goal of the meeting is to create a budget proposal for the senate to review and approve vote on and Vice President Maggie Regier said the task is never easy.

“Everyone goes in thinking everything that they need is absolutely essential,” said Regier, a junior community health custom major. “In an ideal world, we would like to be able to fund everything to the fullest extent, but that’s not reality.”

Because of the limited budget, student leaders have to prioritize programs and resources that they deem absolutely necessary. This includes sacrificing other items for the overall success of ASW.

Even when the budget is spread as thinly as possible, some important line items cannot be funded like the traditional ASW student planners.

Regier said ASW leaders consider the planners a valuable resource for students — the ASW planners contain a full academic calendar as well as the student handbook —  so they looked for other funding.

“We did cut the budget for the planners, so we went to senate to ask to use the emergency funding to pay for them,” Regier said.

Regier said every branch had to make sacrifices but the budgeting process was thorough and considered student needs first and foremost.

“In the end we all came together to decide what was best for the students and what we could most do to [best] help student initiatives and student experiences,” Regier said. “In the end that’s how we were all able to come to a middle ground.”

*A previous version of this story misspelled the last name of ASW Vice President Maggie Regier.

Gabrielle Barker
Gabrielle is senior visual communication custom major with a love for colors, typefaces, textures and words. She enjoys being a Westminster student and working as president of the college’s graphic design club. In her spare time, Gabrielle enjoys drawing portraits of her friends, playing with cats, listening to podcasts and playing violin. Gabrielle hopes to bring her enthusiasm for helping others to The Forum. She looks forward to collaborating with writers to build informative, visually pleasing infographics to accompany their articles.