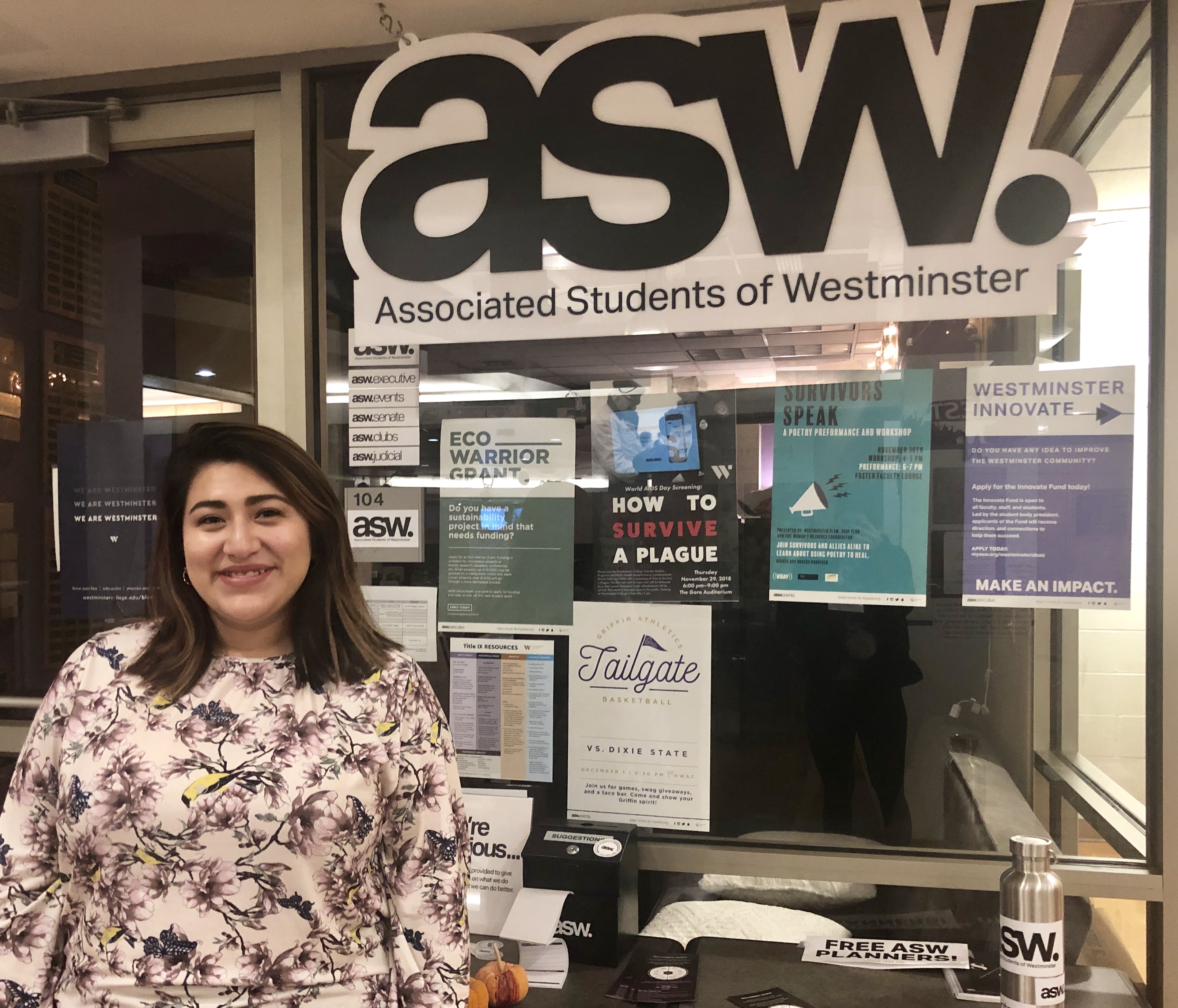 ASW President Jazmin May stands outside of the ASW office located in the Shaw Student Center Nov. 28. May said she believes being president is about listening to students and take in what they are feeling. (Photo by Seaira Moller)

As her first semester as ASW president comes to an end, Jazmin May explains the changes she’s seen and reflects on her role as president.

May, a senior communication major, was elected to the position in Spring 2018 on a platform of increased transparency between ASW and the student body and the promotion of diversity and inclusion on campus.

Some students said they approve of May’s work and support her plans for the future.

“I have been keeping up with Jazmin’s plans for ASW this year and I think she is doing an amazing job connecting with the entire Westminster community,” said senior psychology major Anthony Findley. “I am completely on board with her plan to start a food pantry on campus, I think that will help students in the years to come.”

The Forum sat down with May to talk about her first semester as president and her plans for the Spring semester. Her responses have been lightly edited for clarity and conciseness.

Q: Now that you are a semester into your term, in your experience, what does being ASW President entail?

A: As president, I answer emails, obviously, and attend meetings. I sit on different committees for various things. I also sit on the Utah Student Association Board (USA) essentially that is a group of all the student body presidents in the state of Utah and together we pass bigger initiatives for Utah statewide. Maggie [Regier] and I have meetings with President Dobkin once a month.

I also have initiatives of my own that I help push. For example, the food pantry and moving on the idea of food insecurity on our campus and finding more information about that. Maggie [Regier] and I work together to figure out what are the executive projects we want to work on, and how can we move them forward.

I think being [ASW] President is also about listening to the students and not just hearing them but listening and try to understand what they are feeling. Every student experience is different, so that is why it is important for us to listen to students and see what they have to say to help us to figure out our goals. 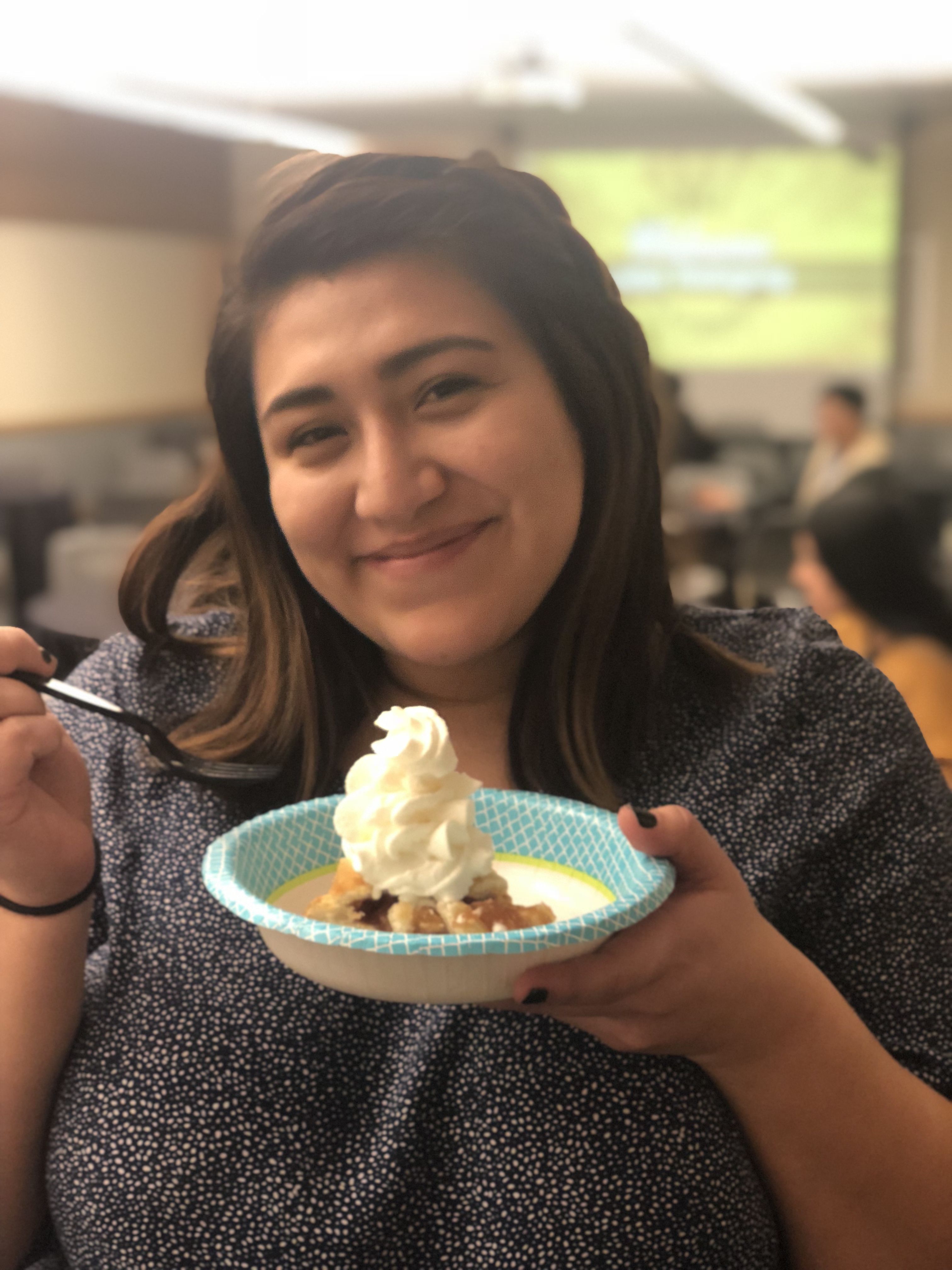 ASW President Jazmin May at the Thanksgiving dinner hosted by ASW Events in the Health Wellness and Activity Center (HWAC) special events room Nov 20. May said one of her goals as president is to have a pilot food pantry on campus starting this academic year. (Photo by Seaira Moller)

Q: How is your role as ASW President different than what you expected?

A: It is definitely not what I expected. Partly, I knew it was going to be a lot of meetings and emails. But, there is a lot more that I didn’t realize that came with it: the stress, the different things you have to do, knowing how to talk to different people, listen to the students.

Even though I was in [student] government, I was on the events team for two years and on Senate for one year. I did observe the student board closer but actually being on the student board I realized how different it is and the way the internal workings of ASW the organization work.

I think being really realistic about what goals you can accomplish because I think every president going in want to accomplish many great things. But in reality, you have a year and even then a little bit less than that to actually complete these goals. […] But working and going through this semester it has to be restructured to actually fit within the timeline.

Q: What are some of the changes you had to make to your timeline?

A: This year what I have been trying to work on is food insecurity [awareness on campus] and figuring that stuff out. What I hope is one day ASW, because [with the timeline] I do not think I will be able to do it, [will create a food pantry] and it would not just be food but also a resource for students. So, they will have hygiene kits and clothes, to turn it into a place students can go. A lot of the time there is a stereotype that Westminster is this private, very rich school where everyone has money that attends here but that is not always the case.

When I first started my term, I [was] really set on starting a food pantry on campus. It has turned into a challenge because I have to collect data to back it up to take to the administration. If I could collect the data, hopefully, there could be a pilot [program] started this academic year.

*Jazmin May was a reporter for The Forum during the 2017-2018 academic year before becoming ASW President.