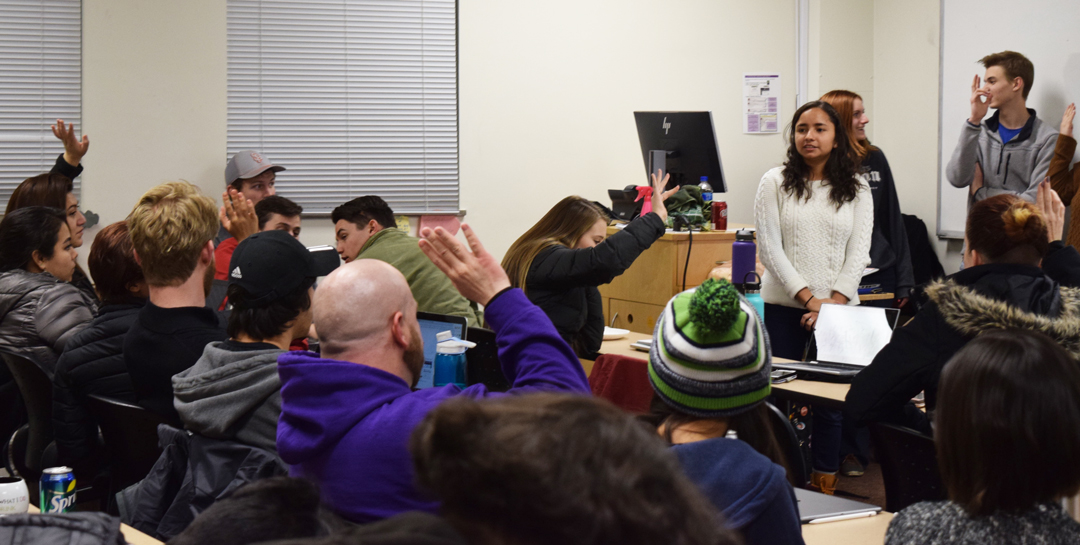 ASW Senators Eyrie Horton, Kate Wiley and Caz Woodall discuss their resolution to increase student wages at Westminster College. During their presentation on the issue at the ASW Senate meeting on Feb. 26 in Dick Hall 102, they discussed how on-campus employment opportunities provide invaluable social connections and professional skills to students and argued that students should be better compensated for their contributions. (Photo by Michael Dougherty)

ASW Senate passed a resolution at its meeting Feb. 26 to propose advanced wages for students working on-campus jobs — but it could be an uphill battle to actually make that happen.

Students working on campus at Westminster College currently make the federal minimum wage of $7.25 an hour. That’s $2.25 more than the state individual poverty wage of $5 an hour but $4.23 less than the individual living wage of $11.48 hour, according to Eyrie Horton, a senior ASW Senator who spoke at the meeting.

“This is only the start of what is going to be a long fight for the student body,” Horton said in a message to The Forum a few days after the meeting. “As ASW, we have the power to give a cohesive voice to students, but we don’t have the funds or power to change the wage grade.”

Now, she said she hopes her research will be compiled and presented to the new president, the Board of Trustees and other administrators who have the power to increase student wages.

At the meeting, Horton argued that the change would create the potential for students to achieve their educational goals and have more access to opportunities without worrying about economics. 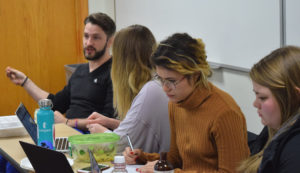 Ryan Cook, the director of student involvement, reviews a resolution to increase student wages at Westminster College and gives his personal input for what can and cannot be done. ASW Senators Eyrie Horton, Kate Wiley and Caz Woodall sponsored the legislation and presented the details at ASW Senate’s Feb. 26 meeting in Dick Hall 102. (Photo by Michael Dougherty)

“The minimum amount an individual student pays for room and board on Westminster’s campus for a semester — assuming a purple meal plan and traditional dorm housing in Hogle or Carleson Hall — is $4,218,” Horton said. “Working the maximum hours a week (20) as a student employee making minimum wage ($7.25) over a 16-week semester period, the total money accumulated would equal $2,320.”

That means students working solely on a Westminster income would be living far under the poverty line and would not even be able to pay their own room and board with their wages.

Horton also argued that students who pay for their own tuition need reasonable on-campus pay — above the minimum hourly wage — and regular hours to meet their financial requirements.

“This change would seek to eliminate some of the hardships students face while striving to achieve their educational goals and therefore would improve the college’s ability to provide students with a solid academic foundation regardless of economic class,” Horton said.

The pay increase would also create the potential for students to achieve their educational goals and have more access to opportunities without having to worry about economics, Horton said.

But in order for that to happen, Horton, who will graduate soon, said other students will have to work toward change in the coming years.

“Students will have to stay passionate about this issue, and [be] willing to make a serious stand about it,” she said in a message to The Forum.