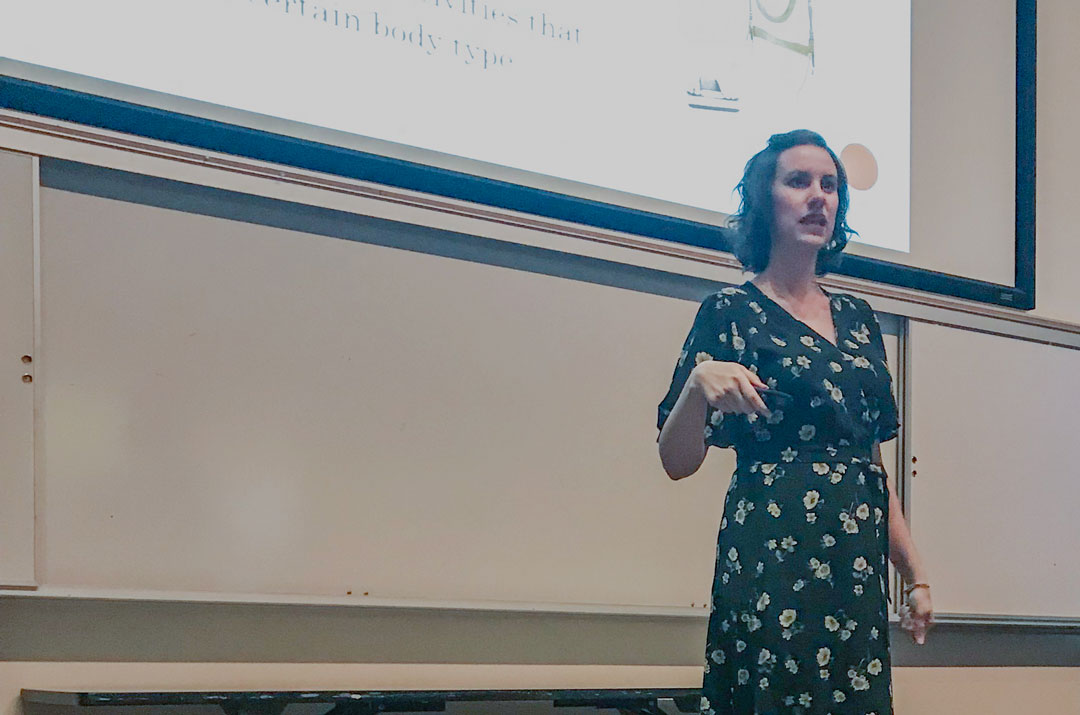 Rebecca Hamilton, a counselor at the Center for Change, a facility that specializes in eating disorder treatment, speaks on the topic of eating disorders Thursday in the Gore Auditorium at Westminster College. ASW Taboo Talks cover important topics that deserve attention but are not often talked about. (Photo by Meghan Garrecht-Connelly)

Though eating disorders are prevalent on college campuses, they’re a topic many avoid. To combat that stigma, ASW brought Rebecca Hamilton, a counselor at a facility that specializes in eating disorder treatment, to the Gore Auditorium at Westminster College on Thursday.

College students are particularly prone to eating disorders, which usually begin between age 18 and 21, according to research from the National Eating Disorder Association. Away from the “watchful eye” of parents, “eating attitudes and behaviors can change and even become dangerous without anyone noticing,” the organization states.

A person’s immediate environment can often lead to eating disordered behaviors, said Hamilton, who works at the Center for Change.

“Genetics loads the gun and environment pulls the trigger,” said Hamilton, noting that factors ranging from family to media can also play a role in eating disorder development. “The behaviors become a way to numb out the feelings,” she added.

College years in particular can bring life changes to students struggling with eating disorders and can disrupt their relationship to their traditional support groups, Hamilton said.

But Julianna Manseau, a first-year physics major, said conversations like ASW’s Taboo Talk — an event series that looks to cover important topics society has deemed uncomfortable or impolite to talk about — can help strengthen those relationships.

“Even though you may develop great friends [in college] that can support you, it’s kind of the question of, ‘Do you feel comfortable talking to those friends?’” she said. “I think if you all go to a talk together and understand that talk, if an issue does arise, you can talk about it with them or call your family back home and get the support that you might need.”

Naena Bland, a senior, agreed that the event offered an important venue for college students who may be struggling with eating disordered behaviors.

“We have so many people who are afraid to talk about [eating disorders],” she said. “People are having difficulty in their lives without anybody noticing or being able to help them. Having conversations like this is bringing attention [to the topic] to allow people to be aware of whether or not they might have an eating disorder.”

The Center for Change is located in Orem and treats patients on an inpatient, residential and outpatient basis.