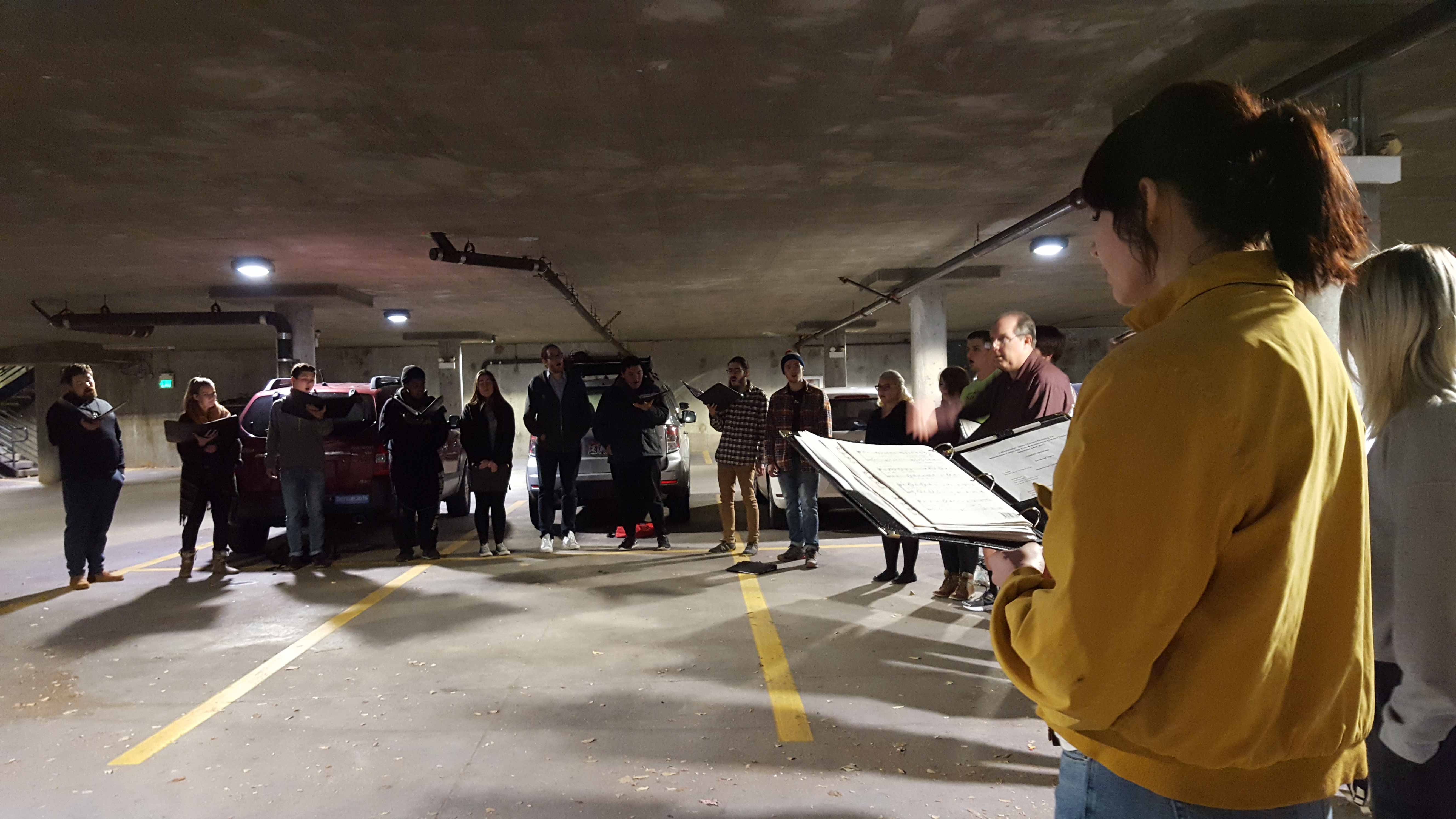 One of Westminster College’s choral groups rehearses in the garage outside the Jewett Center for Performing Arts to test different acoustics. Come this late fall or early Spring, the college will break ground on the Florence J. Gillmor School of Music, which will provide more space for the growing arts programs. (Photo by Mary Denison)

When Dr. Chris Quinn started working at Westminster College in 1994, there wasn’t much of a music program. To join, students weren’t required to sing or play an instrument — they just had to love music.

Quinn started working as the director of the music program when the college flew him out for an interview the day after he finished his doctorate program. He has stayed with the program ever since, which has been for over 23 years.

The program has progressed and grown over the years, and Quinn said he’s excited to see its next chapter begin with the groundbreaking this fall or early next semester of a new, three-story addition to the Jewett Center for the Performing Arts that’s been 20 years in the making.

“Dr. Quinn is really committed to the new center and to helping students,” said Aimee Beltran, a vocal performance major. “He really cares about his students,” she added, noting the large role he’s played in getting sponsors for the project.

This building will be named the Florence J. Gillmor School of Music, in honor of a 1938 graduate of Westminster’s music department and the foundation that will support the majority of the funding.

The $13 million dollar structure has also received $2.6 million from the Emma Eccles Jones Foundation which puts the project at $6.8 million in gifts and pledges so far, according to Jeff Driggs, the director of foundation relations and institutional advancement.

The Forum sat down with Quinn to talk about the addition to the Jewett Center and how it will impact the college’s evolving music program. His responses have been lightly edited for clarity and conciseness. 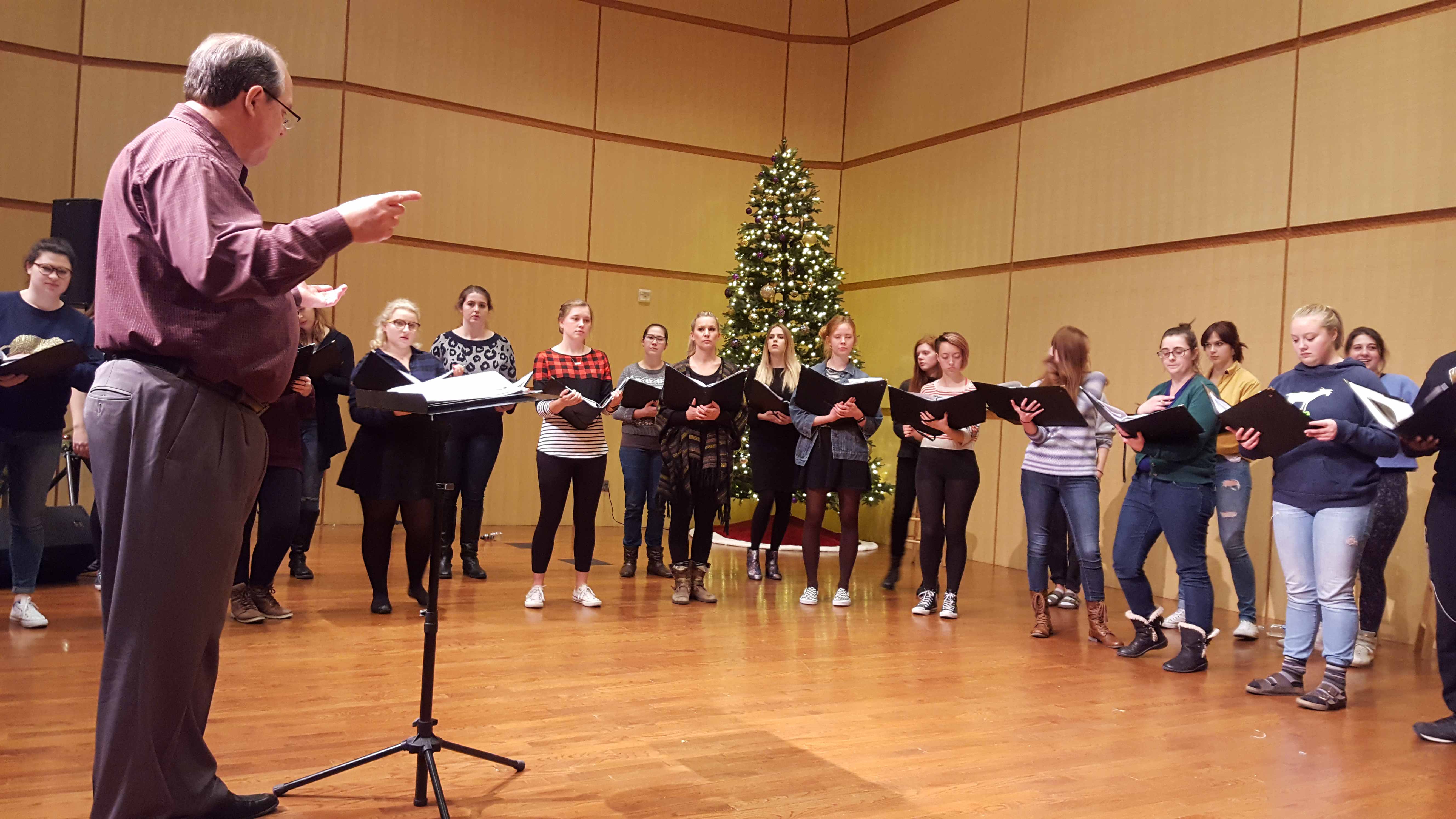 One of Westminster College’s choral groups rehearses in the concert hall of the Jewett Center for Performing Arts in preparation for its upcoming performances. Come this late fall or early Spring, the college will break ground on the Florence J. Gillmor School of Music, which will provide more space for the growing arts programs. (Photo by Mary Denison)

Q: Why is the school building a new center for the arts?

A: Since our music program has grown so much, as has the theater program, we need to have more space. Right now, we have one rehearsal room for all the ensembles that we have, so it’s a mess, it’s crowded, it’s not the best experience. Typically you have one choir room and one instrumental room, and that’s what we’re going to have — a new choir room and a new recital hall… It’s going to include an art space for a new art gallery. It’s really to help the entire performing arts and the visual arts.

Q: Who started the initiative?

A: I would say it is President Steve Morgan without a doubt. This will be fun because this will be his legacy. I was here when we had our first addition of the Jewett Center done. He was the CFO (chief financial officer) at the time and he worked diligently to get us everything that we asked for in this building, so we’re very excited. That was our first addition; this will be our second.

When Florence Gillmor was alive, I used to bring students to her home and she would come to all our concerts on campus. Well, after she passed away, her foundation kept going and has contributed. They have given us a $5 million gift, and that set the stage that we could start fundraising.

Q: Why has it taken 20 years to get this initiative rolling?

A: We actually had a lot of support with the initial gift, but when you’re doing a $13 million project, it takes a while to fundraise. There are other needs and priorities at the college as well, so it’s a balancing act… Our programs are growing so much, which helps with donors, but it still takes time to cultivate those people to say, “This is a good thing; we’re doing a wonderful thing.’

A: Music and theater are attracting students big time. I think both music and theater programs recruited the most students this year… There will be more space. We’ll have a lounge area for performing students and the area will have a stage where they can perform for each other. They will have a place to congregate, which we don’t have in the current building. It will just bring a real sense of community to our performing arts… It’s just going to be a nice place for people to gather.

For music, it’s the Florence J. Gillmor School of Music, and it has propelled us from being just a music department or program to a school of music. And as a school of music, there’s a lot more prestige that goes into a school. It tells a potential or prospective student that we’re very serious about our music program.

Q: What are some of the other major changes you’ve seen in your time here?

A: We added the music major just seven years ago, so the major itself is very young. We’re also putting through the curriculum committee a brand new music curriculum to benefit students who want to double major or who want to major in music and minor in two or three other areas because they have other interests. Our incoming class next year will have the opportunity to be a performer and choose the performance emphasis versus a music studies track.