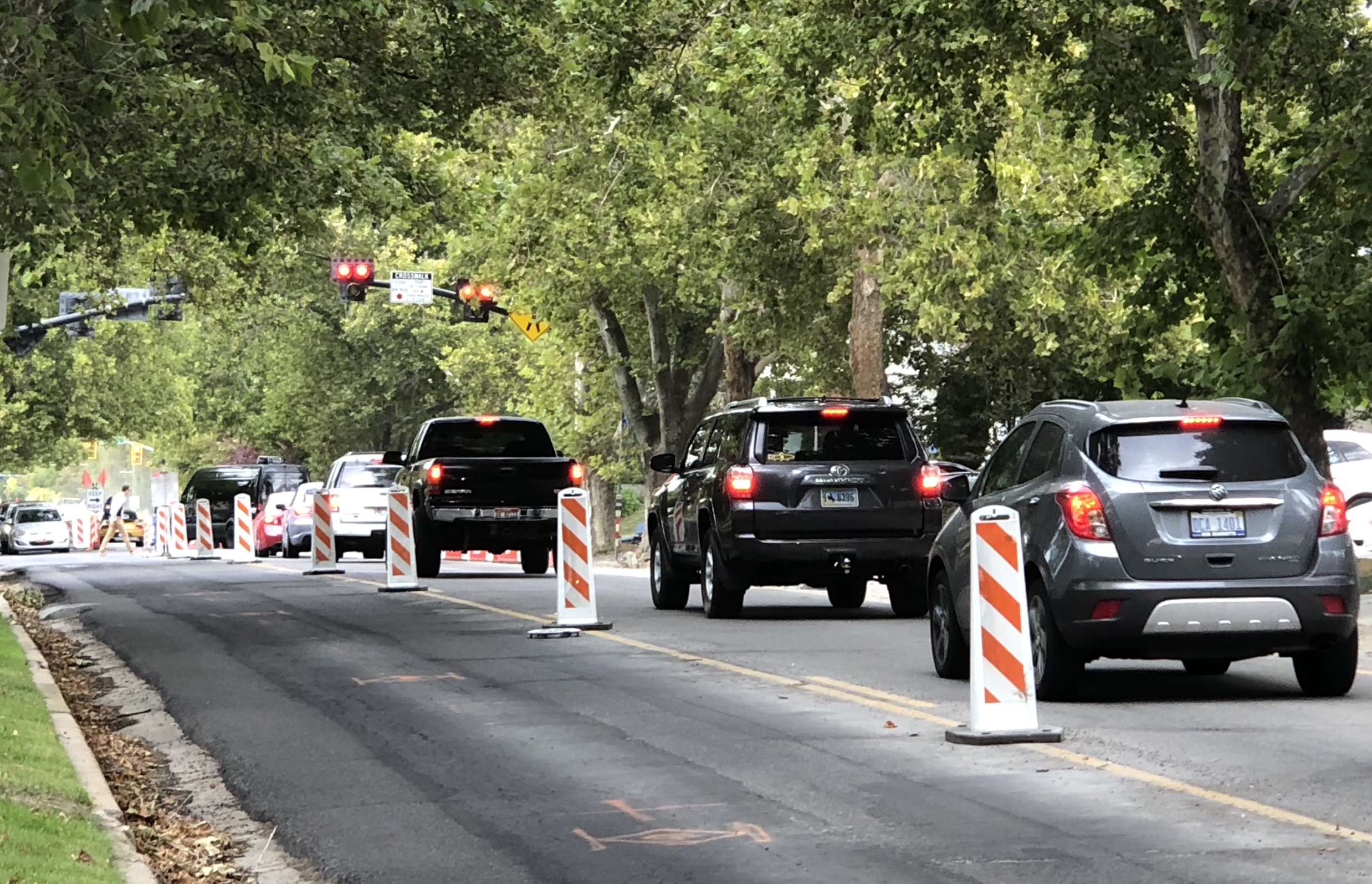 Cars wait to continue driving on 1300 East as a pedestrian crosses the road on Sept. 23. Westminster College students said the lights which signify when pedestrians are using the crosswalk are challenging to see because of tree cover making crossing the street dangerous. (Photo by Oakley Matthews)

There is at least one thing all 2,509 students at Westminster College have in common: they have all crossed on a crosswalk at least once in their lives.

Either by foot, bike or now the popular electric scooters — introduced to Salt Lake City earlier this year — many of these students have interacted with a car at a crosswalk. With Westminster located on 1300 East, a popular route for daily commuters, it is common to hear students talk about the dangers of crossing the crosswalks surrounding the college.

The construction on 1300 East also put the crosswalks in the middle of construction cones, torn up roads and overgrown trees. Some students said this makes crossing the road even more of a challenge.

The torn up roads, rerouting of driving lanes and traffic cones due to construction on 1300 East is distracting drivers from pedestrians trying to cross the road, according to some students.

“The crosswalks already were not that great,” said Hayley O’Brien, a junior aviation major.  “And now because of the construction, people are more worried about the cones and workers, so they kind of divert their attention away from the crosswalks.”

Some students said that drivers are not paying enough attention to the crosswalks while they maneuver through the construction. Hannah Peacock, a senior chemistry major, agreed that drivers need to be more conscious of pedestrians.

“Driving on the city streets is hard for everybody especially with all the construction.” said Peacock. “Everybody just needs to be more aware.” 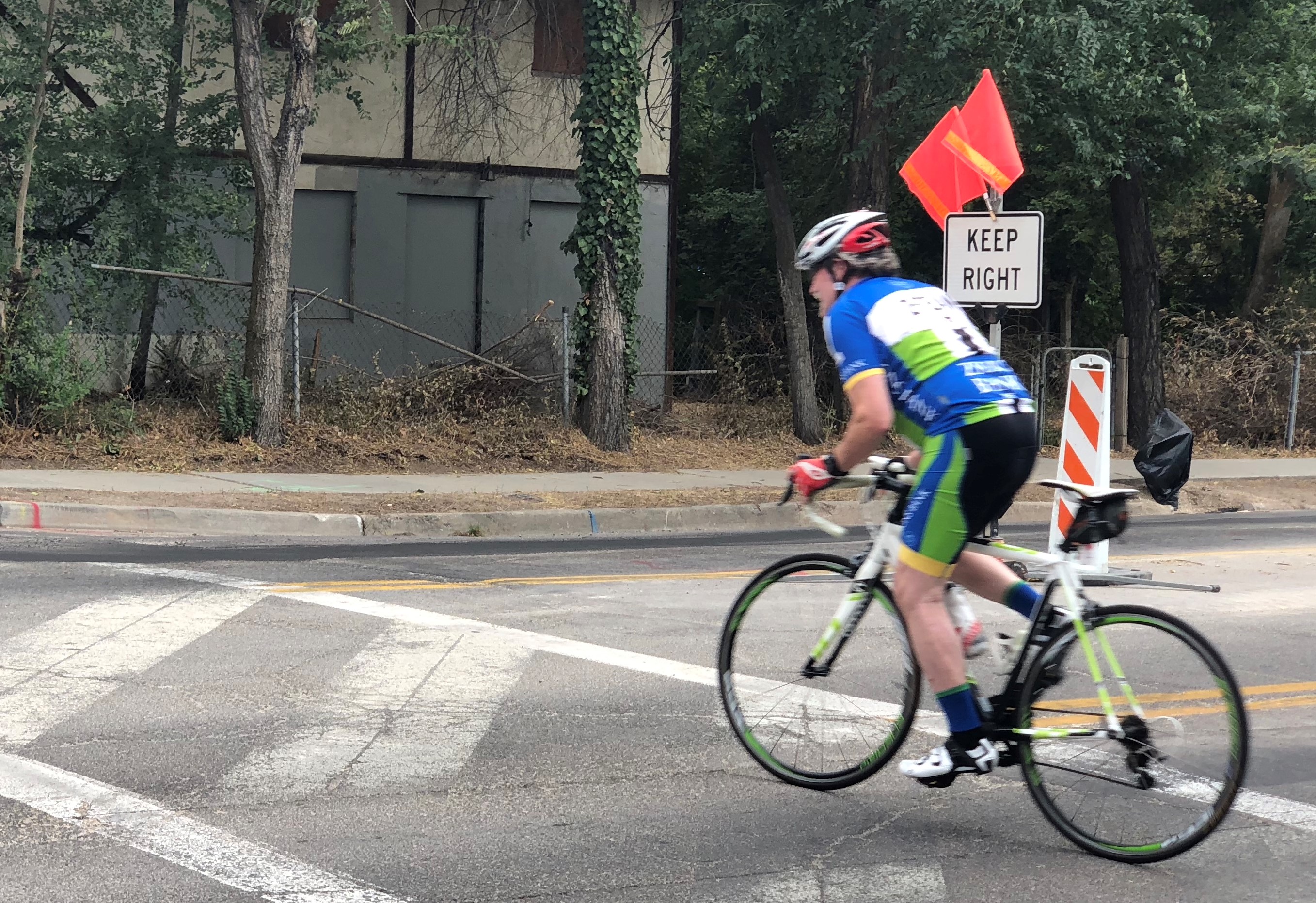 A man rides his bike across a crosswalk on 1300 East on Sept. 23. Many drivers fail to stop for pedestrians around Sugar House, said students especially with the construction distracting drivers. (Photo by Oakley Matthews)

Along 1300 East, between Downington Ave — located right outside of the south end of Westminster — and East High School, there are 41 marked and unmarked crosswalks that are used by pedestrians daily. Along that route, there are 19 bus stops on both the east and west side of the road.

Since 1300 East is a two-laned road, busses are forced to stop traffic when loading or unloading passengers. Anne Goodwin, a daily commuter, said she has seen cars who have gone around busses not realizing that passengers have gotten off and started to cross in front of the stopped bus.

“A lot of times cars will speed up and down 1300 East and not stop when busses are letting people out,” Goodwin said. “I know of at least five times I have witnessed people using a cross walk on 1300 and cars blazing right through.”

According to the 41-6a-1002 Utah Code, it is illegal to drive past a vehicle that is stopped for a pedestrian.

When approaching both crosswalks near Westminster’s campus on 1300 East, the lights which signify when someone is using the crosswalk are challenging to see said students.

“I think because the trees are overgrowing, that would be a large factor of drivers not stopping for the lights because they can’t see them,” aviation major Hayley O’Brien said.

According to the Utah Department of Public Safety fatal crash summary of 2017, 43 pedestrians were killed in Utah last year, and over the last four years, pedestrian deaths have increased.

Earlier this year, the Salt Lake Police Department issued a “Crosswalk Traffic Sting” set up in South Salt Lake after the department received a complaint that cars weren’t stopping for people crossing the street. 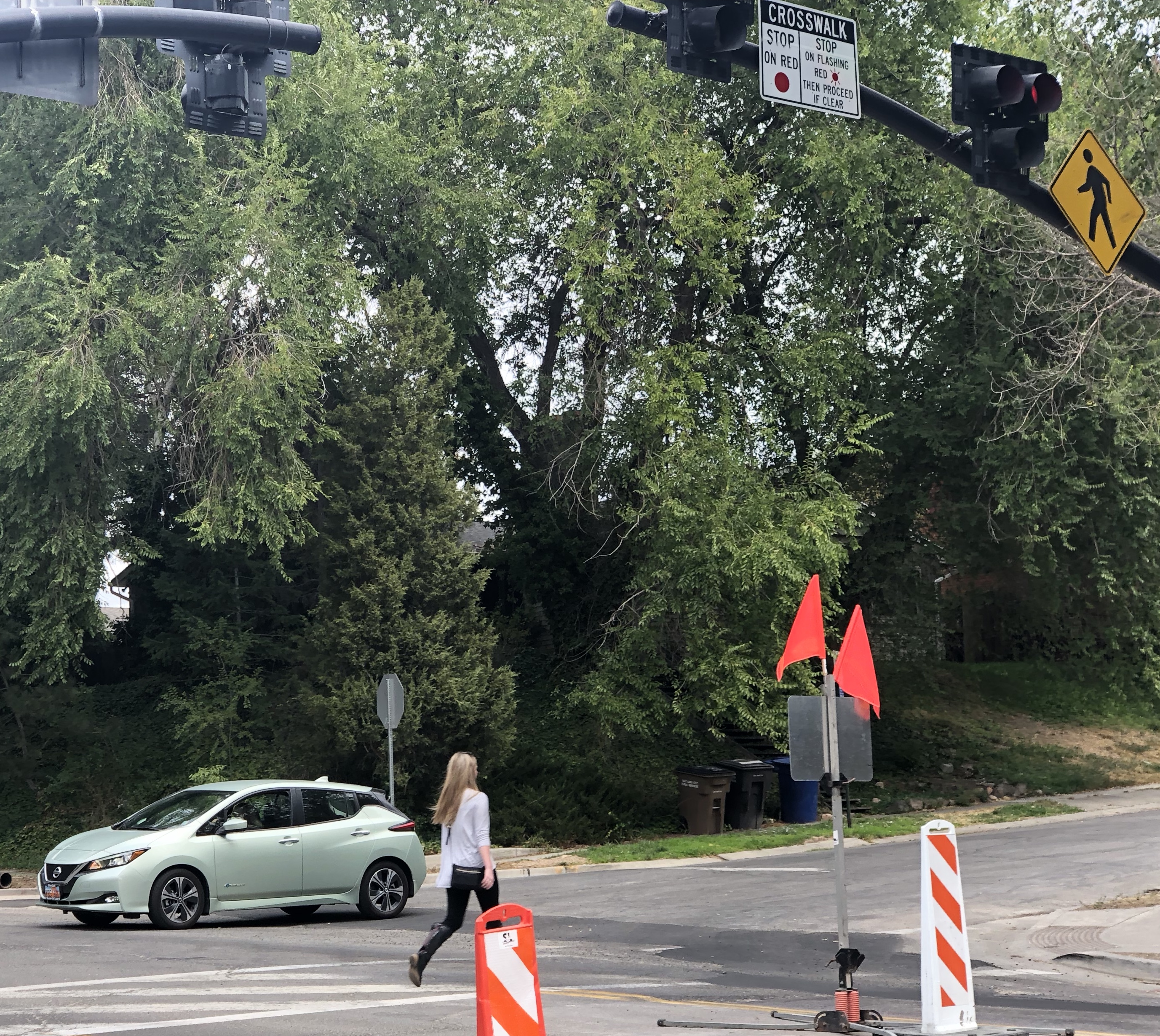 McKenzie Kearns walks across a crosswalk on 1300 East as a car waits to turn left on Sept 23. Students say that it is dangerous to cross the street because cars don’t stop for pedestrians. (Photo by Oakley Matthews)

An undercover officer would slowly walk across the crosswalk at various times and a different officer would then fine the drivers who failed to stop.

Many drivers also fail to stop for pedestrians around Sugar House said students.

“The worst part is when someone walks across and then the people think that it’s clear even though the lights are still flashing,” said Anna Marno, a junior computer information systems major. “They think that since the one person went, they can keep going.”

Regardless, several students said they have almost been hit while using the crosswalks near the college.

“Someone was turning out, but they didn’t see me [on the crosswalk],” junior business management major Erik Hulbert said. “So the other cars stopped probably thinking it was for them and then almost hit me.”

Jaydon Lawson, a junior chemistry and biology major, said he had a similar experience and was almost hit by a car while using the crosswalks near Westminster.

“I was going across and this old man started hauling butt taking a right turn,” Lawson said. “I had to press my brakes and [I] flipped over my bike and handlebars. He didn’t even notice either, he just drove off.”