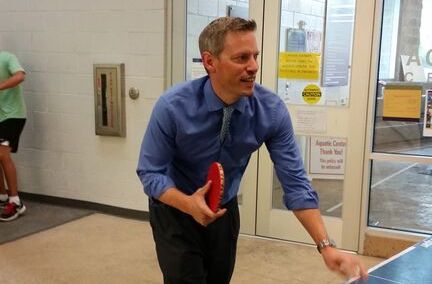 Dean of Students Mark Ferne gets ready to serve the ball in a game of ping pong. in 2015. During his 16 years at Westminster College, Ferne said he tried to build relationships with students through programs like “Defeat the Dean” where students could win a free dinner if they beat Ferne in a game of pingpong. (Photo by Brittany Punjabi)

Former Dean of Students Mark Ferne, is leaving Westminster College after a 16-year career where he said he tried to focused on community building and student success.

Ferne was the longest-serving dean of students in the history of the college, according to The Westminster Review.

Ferne said being dean of students was his “dream job” because he said he genuinely cared about students and students’ success.

Westminster’s small size and strong sense of community are what first attracted Ferne to the college, Ferne said, and he liked how closely students and faculty interacted because it reminded him his undergraduate experience at Capital University in Ohio.

In January of 2002, Ferne started at Westminster as the director of student life. He began making his way up the organizational pyramid gaining the position of dean of students three years later.

“Something I love most about this institution is that what’s consistent across the board is the deep care and concern that faculty and staff have for the students, and wanting them to be successful,” Ferne said.

Part of student success meant building relationships and interacting with students as often as he could during his time at Westminster, Ferne said.

“I definitely have seen him at a lot of events, more than most faculty members,” said Mackenzie Willis, junior biology major. “It’s cool to see a dean who doesn’t just discipline.”

Ferne said he would host on-campus activities like “Defeat the Dean,” “Discussions with the Dean” and “The Dean Delivers.” Students try to defeat Ferne at a game of ping pong to win a free dinner or have him deliver them food during finals week.

Ferne’s connection to students has lasted past their time on campus. Over the years, three different Westminster alumni couples asked him to officiate at their weddings.

Not only did Ferne make it a point to connect and build relationships with students, this mindset extended to bonds with faculty and staff as well, he said.

“For intramurals, he made sure there was a staff basketball team,” said Susan Heath, associate athletic director. “He was also a practice player for women’s basketball in the [National Association of Intercollegiate Athletics] days.”

Heath was a part of the hiring process for Ferne. She has been at Westminster for the duration of his time here and said she noticed the effort Ferne put into interacting with different members of the college community.

“In a lot of ways, he brought staff and faculty together,” Heath said. “It was a lot of community building that was not a part of his job, but ways for people to connect and have fun away from work.”

This dedication to building a strong community and to maintaining personal relationships are what made Ferne a great dean of students, according to Heath.

“He’s outgoing, he’s friendly and an engaged person,” Heath said. “There are so many students who got through, and graduated, or got to a better place because of him.”