Mel Van De Graaff, a Westminster College alum, talks about identity in Converse Hall on April 19. Van De Graaff uses the pronouns ‘they’ and them’ and identifies as gender non-binary, meaning they operate outside the constraints of traditional male and female gender expectations. (Photo by Taylor Stevens)

Public bathroom doors are adorned with male and female stick figures indicating which to enter. Clothing is divided into separate sections for men and women. Color-coded toys specify which are for boys and which are for girls.

Many people walk through life never noticing the subtle ways gender impacts their everyday interactions and decisions. But growing up, Mel Van De Graaff was acutely aware that neither of the two available options seemed to fit.

Van De Graaff is one of a number of people in Westminster College’s campus community who identifies as gender non-binary — a term used to describe someone who operates outside the constraints of traditional male and female gender identity.

Other terms include genderqueer, agender, bigender and more. None of them mean exactly the same thing, “but all speak to an experience of gender that is not simply male or female,” according to the National Center for Transgender Equality. The idea that there are only two, oppositional genders is sometimes known as the gender binary. 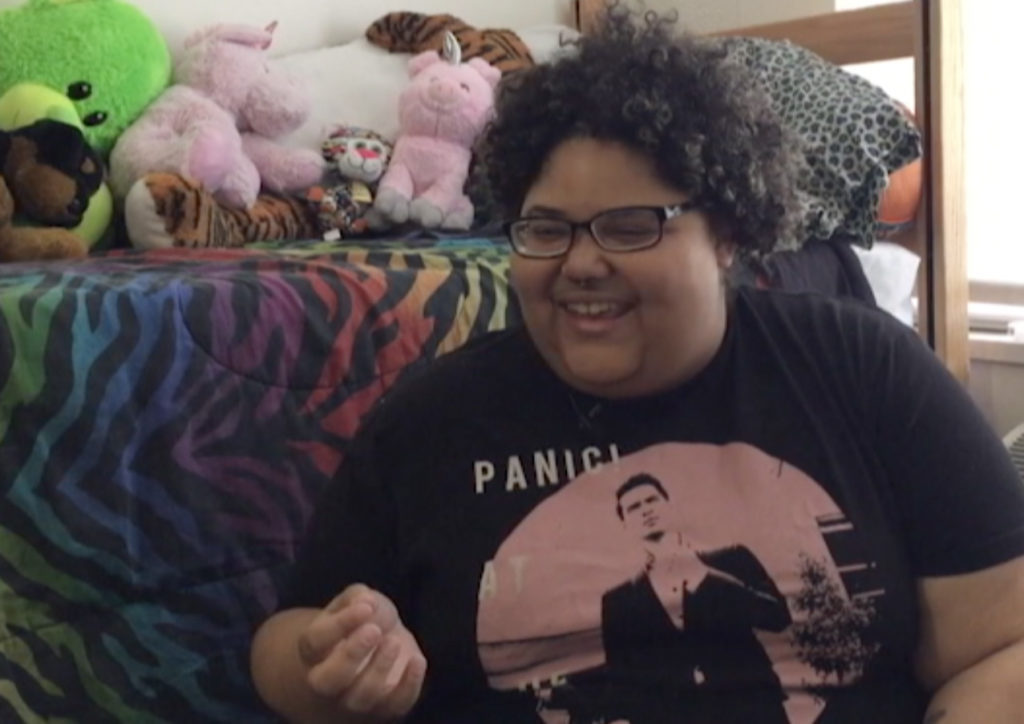 Nicole Tyler, a senior English major, talks about identity in Hogle Hall at Westminster College on April 20. Tyler uses the pronouns ‘they’ and ‘them’ and identifies as gender non-binary, meaning they operate outside the constraints of traditional male and female gender expectations. (Photo by Taylor Stevens)

“The gender binary operates in our society kind of like a two by two system,” explained Kristjane Nordmeyer, a sociology and gender studies professor at Westminster. “[It’s] the idea that there are only male-bodied persons that are masculine and female-bodied persons that are feminine and that everybody needs to fit into one of these gender categories. And there’s actually a lot of kind of reinforcement around that.”

That includes the wide range of items and expectations assigned to a group because of sex, or the genitalia a person is born with. Though people often think gender and sex are the same, Nordmeyer noted that gender can be different from sex and exist outside the binary altogether.

“For non-binary folks, then, the binary is completely disrupted,” she said. “So gender itself isn’t categorized into these two by two kind of categories that assign roles and expectations and presentations and everything else into these two worlds that are seen as different.”

The Forum spoke with four members of Westminster’s non-binary community about their journey to understanding their identities. For many of them, that process began once they came to Westminster, but they said they had a sense from early on that their assigned genders didn’t fit.

“What my genitalia means to this body and what this body means to the world [is] that I should be, like, strong,” said Kyler Salazar, a former Westminster College student who uses the pronouns ‘they’ and ‘them.’ “Like, stoic. Kind of emotionless in ways. Aggression and anger, of course… And none of that stuff is for me and that’s what started making me realize, like, ‘Wait a second. I don’t identify with what is a man.’”

It’s difficult to know how many people in the United States identify as non-binary, since the Census doesn’t collect that data, according to an article in USA Today. But the limited research that has been done estimates that non-binary individuals make up 25 to 35 percent or more of transgender populations, according to a fact sheet from the Society for the Psychological Study of Lesbian, Gay, Bisexual and Transgender Issues.

Some states — including Washington, Oregon and California — have recently begun recognizing a third gender.

And in March, Van De Graaff became one of the first people in Utah to receive gender non-binary markers on their legal documents.

Although legal and societal changes are beginning to address non-binary identities, systems in non-Western cultures have long recognized them.

The Hijra in India, the American indigenous Two Spirit people and the Samoan Fa’afafine people “are sometimes considered to comprise a ‘third’ gender, but may or may not identify as non-binary or transgender,” according to the LGBT psychological society.

Though widespread awareness of some gender identities has grown, gender non-binary has garnered relatively little attention and cultural visibility.

“Prejudicial attitudes toward non-binary people may be greater than attitudes toward other LGBTQ people, given the lack of knowledge and information that most people have about this population,” the society concluded.

As non-binary people look to live their lives authentically, many said they also have to consider the risks associated with that choice — from the emotional trauma of coming out and not being accepted to physical violence.

“If you step outside of your box [you were assigned at birth], then, you know, you’re going to be somewhat sanctioned,” Nordmeyer said, noting this is especially prevalent for male-bodied individuals who step into feminine roles and for people of color. “There’s a lot of harassment and violence and policing that can go along with that.”

That’s part of the reason Nicole Tyler, a senior English major who identifies as gender non-binary, hasn’t explored the range of possibilities masculinity may hold.

“I’m not sure if that’s a safe thing for me to do,” said Tyler, who uses the pronouns ‘they’ and ‘them.’ “At least now as I present as femme, I can do so and it’s normally going to be a safe thing and I don’t risk outing myself in a space that’s not okay to [present as more masculine] in.”

Tyler’s blackness also presents challenges when it comes to non-binary identity, they said. When people think about that group, the image usually comes with its own set of constraints that Tyler doesn’t fully fit — androgynous, female-bodied and white.

Non-binary folks face difficulties not only with getting the law and society to recognize their gender but also their most intimate family and friends.

Adele Reynolds, a senior biology major, said being misgendered — a term for when someone uses the wrong pronoun or refers to someone differently from the way they identify — is part of their everyday life.

Van De Graaff noted that using someone’s correct pronouns is no small thing — it’s an essential way of demonstrating that you respect them as a person.

“If you use the wrong pronoun, it’s like you’re saying, ‘No, your name is not Stacy, it’s Sarah,’” said Van De Graaff, who uses the pronouns ‘they’ and ‘them.’ “It’s literally a way of identifying me. It’s not just a word… It’s a shorthand version of who I am.”

Growing up, Van De Graaff, Reynolds, Salazar and Tyler said they remember not feeling comfortable with the roles and expectations ascribed to the gender they were assigned at birth.

But since coming to Westminster, the four said they’ve carved out a better understanding of their gender identities.

“If you can’t really identify the gender, you’re going to think about, ‘Well, who is this person?’ Not, ‘What gender do they go by?’” Salazar said. “Because if you view it that way, like, ‘What gender are they?’ it’s literally like, ‘Okay, what two sides can I view them as?’”

For Reynolds, having the language to understand their identity has made a big difference. 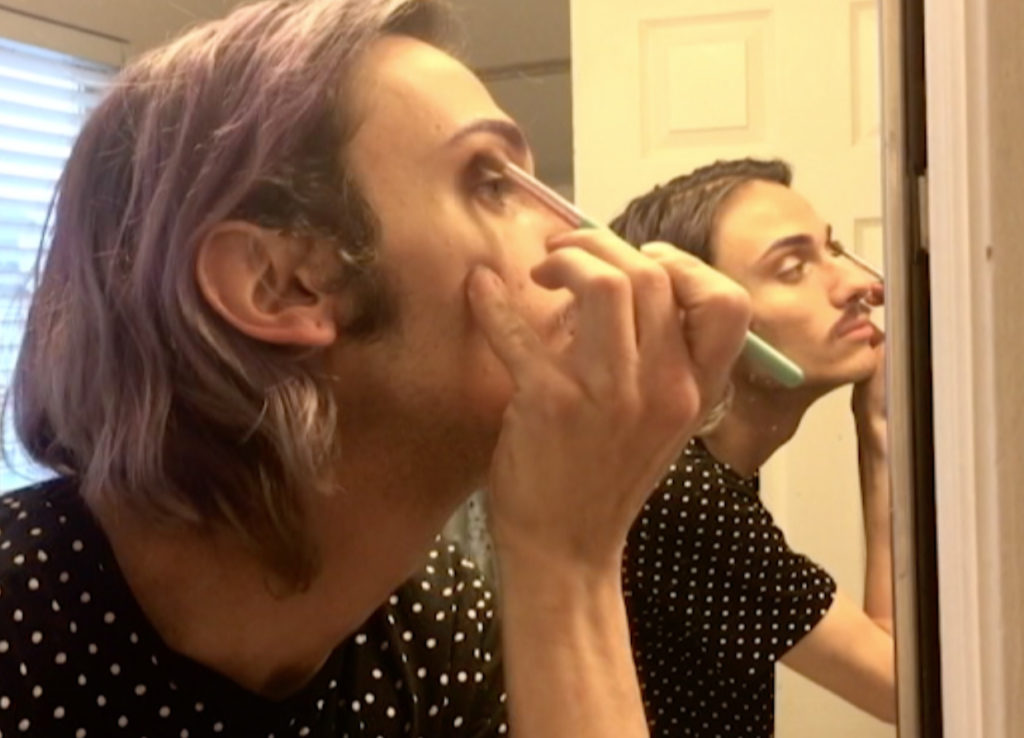 Kyler Salazar, a former Westminster College student, puts on makeup at their home in West Jordan. Salazar uses the pronouns ‘they’ and ‘them’ and identifies as gender non-binary, meaning they operate outside the constraints of traditional male and female gender expectations. (Photo by Taylor Stevens)

“It allows me to feel more like a human being,” Reynolds said. “It’s really lonely not having these words to describe what’s going on with you. It’s really lonely to not realize that other people are going through the same thing. You can’t help but feel like, ‘Well, maybe I’m just weird. Maybe there’s something wrong with me. Maybe I’m just, you know, making a fuss when nobody else is.’”

Though gender non-binary identity is hardly new, Nordmeyer said the conversations around it do seem to be changing more rapidly than they have in the recent past.

“This time does feel different to me,” she said, pointing again to the changes in language and wider recognition of a range of gender expression. “[But] it’s hard to know how much is just me living in an academic world talking to other academics and students who identify as non-binary and how much it’s creating larger social change.”

Because gender identity is personal and individualistic, each of the non-binary individuals interviewed said they wanted to emphasize that their experiences are not necessarily representative of the broader community.

“Let [gender] exist how it’s going to exist because that’s how people work,” Tyler said. “We are complex. We are nuanced.”

Author’s note: Kristjane Nordmeyer is the author’s adviser for this project, which was completed as part of a gender studies capstone class.