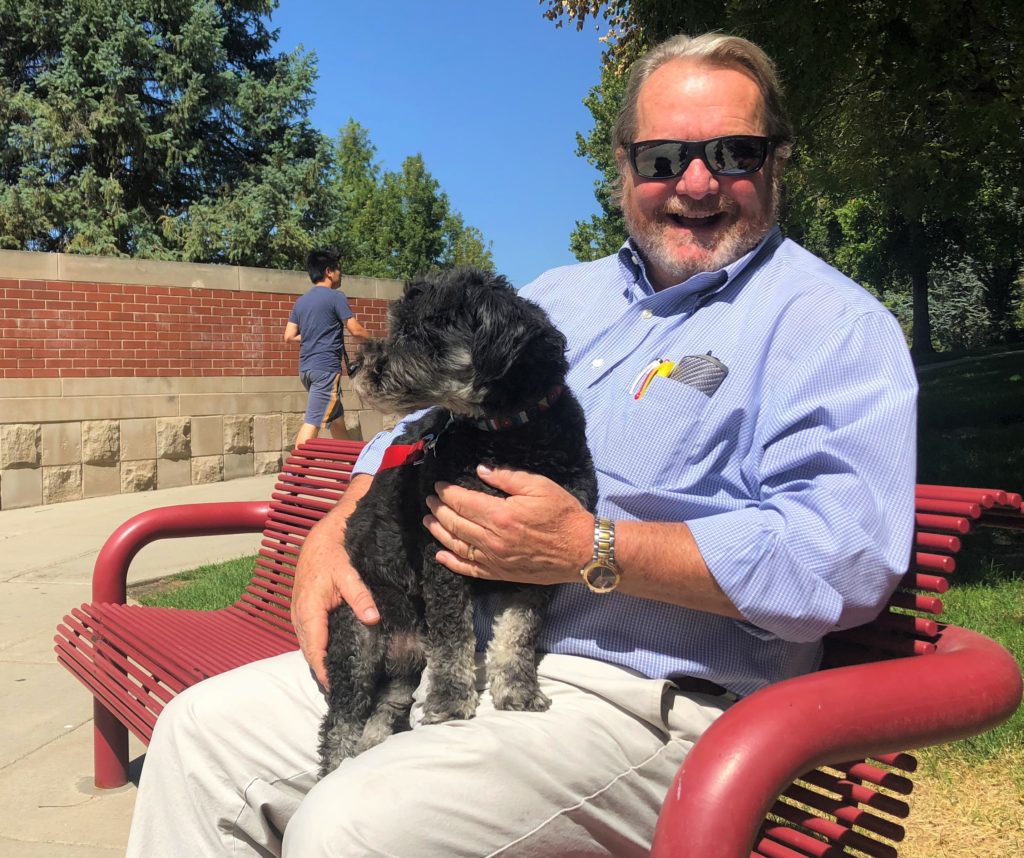 Professor Cliff Hurst sits outside of Giovale Library with his dog Harvey, a Havanese mix, on Sept. 13. In accordance with Westminster College policy, Hurst regularly brings Harvey to his classrooms and office hours. (Photo by Molly Gray)

From the outside looking in, Westminster College appears to have a lenient policy towards service animals, emotional support animals and pets. It may not, however, be so simple.

Anybody who has taken a handful of classes at Westminster has probably seen a dog in the classroom at least once. The college has such a dog-friendly culture, in fact, that it there is a Westminster DogSpotting Facebook page and a dog show in late September.

“I know that there’s definitely a decent amount of people who bring their dogs to classes,” said pre-nursing major Serena Blake.

Blake, who formerly lived in Carleson Hall with her terrier Griffin, said she knows a thing or two about the rules and expectations that come with having a dog on campus.

“There were certain classes that were definitely better to take [Griffin] to,” Blake said. “It was definitely [based on] the professor’s preference.”

As evidenced by the abundance of dogs seen on campus, the college embraces furry friends. There are some places on campus, however, where pets, defined by campus policy as non-service companion animals, are not allowed. In some cases, even trained service dogs are prohibited from being in these areas.

“Basically, any place that a service animal is in danger is where they’re not allowed,” said Karen Hicks, director of Disability Services. “Service animals’ olfactory [smelling] system is much more intense than ours, so in a chemistry lab where chemicals won’t necessarily injure us, it could really have a negative impact on an animal. It can seriously burn their nasal passages.”

The same regulations apply to the Bon Appétit cafeteria in the Shaw Student Center, as well as certain janitorial closets, according to Hicks. 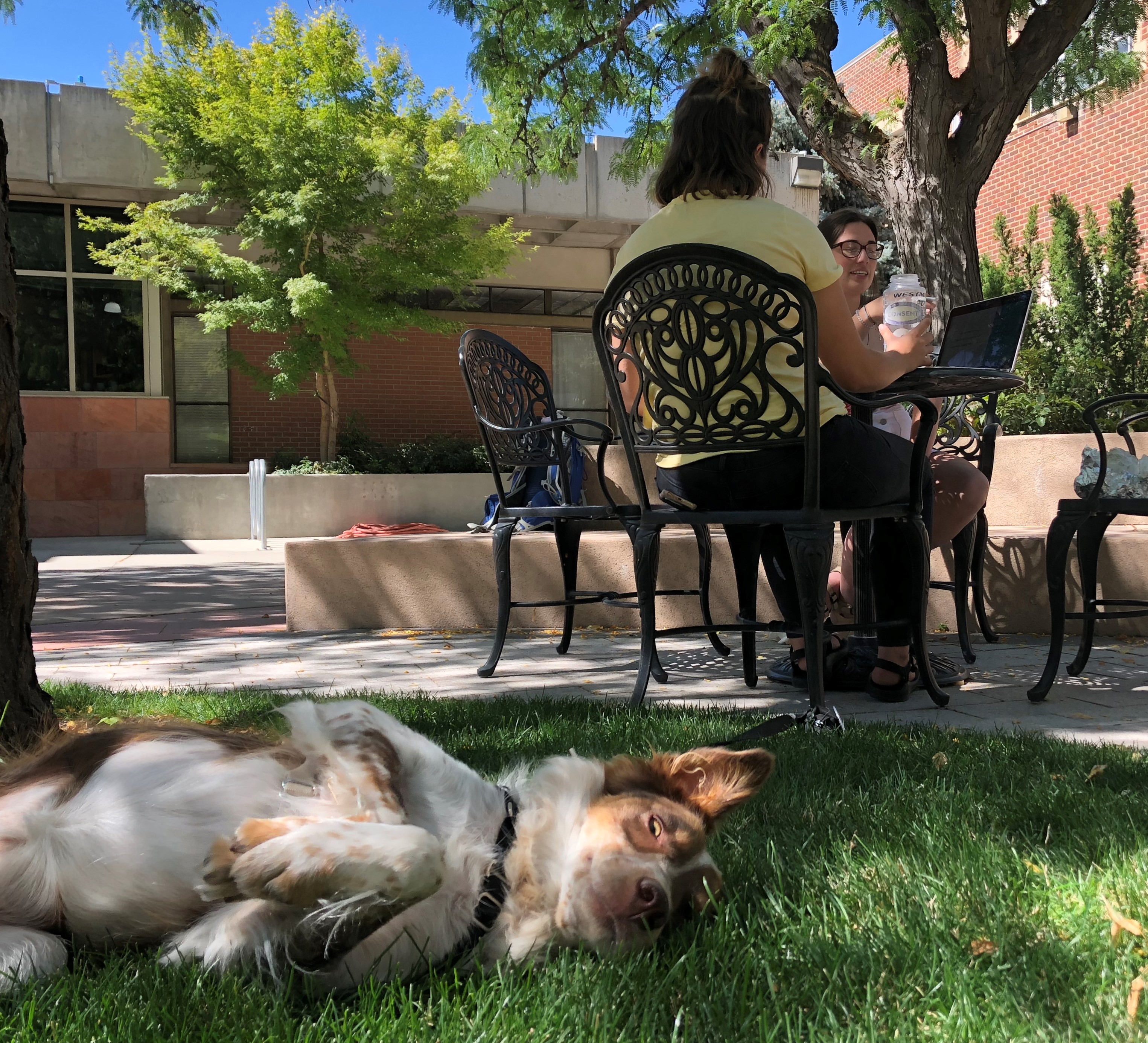 Students Izzy Miller and Kenzie Campbell study in Richer Commons with Luna, an Australian shepherd-border collie mix on Sept. 14. Westminster College policy states students are free to bring leashed dogs to outdoor areas on campus, but some rooms and areas are off limits to dogs. (Photo by Molly Gray)

Hicks also said “they have to allow service animals, which [can be] a dog or a miniature horse. Those are the only two animals that qualify to be a service animal.”

Pets may be allowed in buildings and certain classrooms but are listed under Westminster’s “What Not to Bring” list for incoming students and are strictly prohibited in the residence halls, according to the college’s website.

Students who wish to register their pet as an Emotional Support Animal (ESA), however, must work with Disability Services to make an exception. Although ESAs provide an important service for their owner, they are not required to receive any specific type of training and are not recognized by the Americans with Disabilities Act (ADA). Ultimately, it is up to a professor’s discretion as to whether or not they will allow the ESA in the classroom.

Riley Levine said he registered his 8-month-old Akbash-Australian shepherd mix named Samba as an ESA with the college last year.

“She’s definitely made me a happier person, because that’s just an awesome f***in’ thing to come home to every day,” said Levine, a third-year communication major. “Not everyone should have a dog, especially college kids, but if you’re in the right situation with a home, and you’re ready to take care of something, get a dog. It definitely makes your life a little better.”

Levine said that while most people find Samba cute and enjoyable, he has been discouraged from bringing her to class.

“My professor said it would be best if I didn’t bring her to class because he was worried about people getting distracted but nobody’s ever been mean about her or told me I had to leave somewhere because I had her,” Levine said.

While it’s up to professors whether or not they allow dogs in their classroom, people are free to bring leashed dogs to outdoor areas on campus, according to school policy. To avoid any conflict with the regulations, dog owners must be conscious of their dog’s behavior, make sure the dog is restrained and talk to professors before bringing their dog to class.