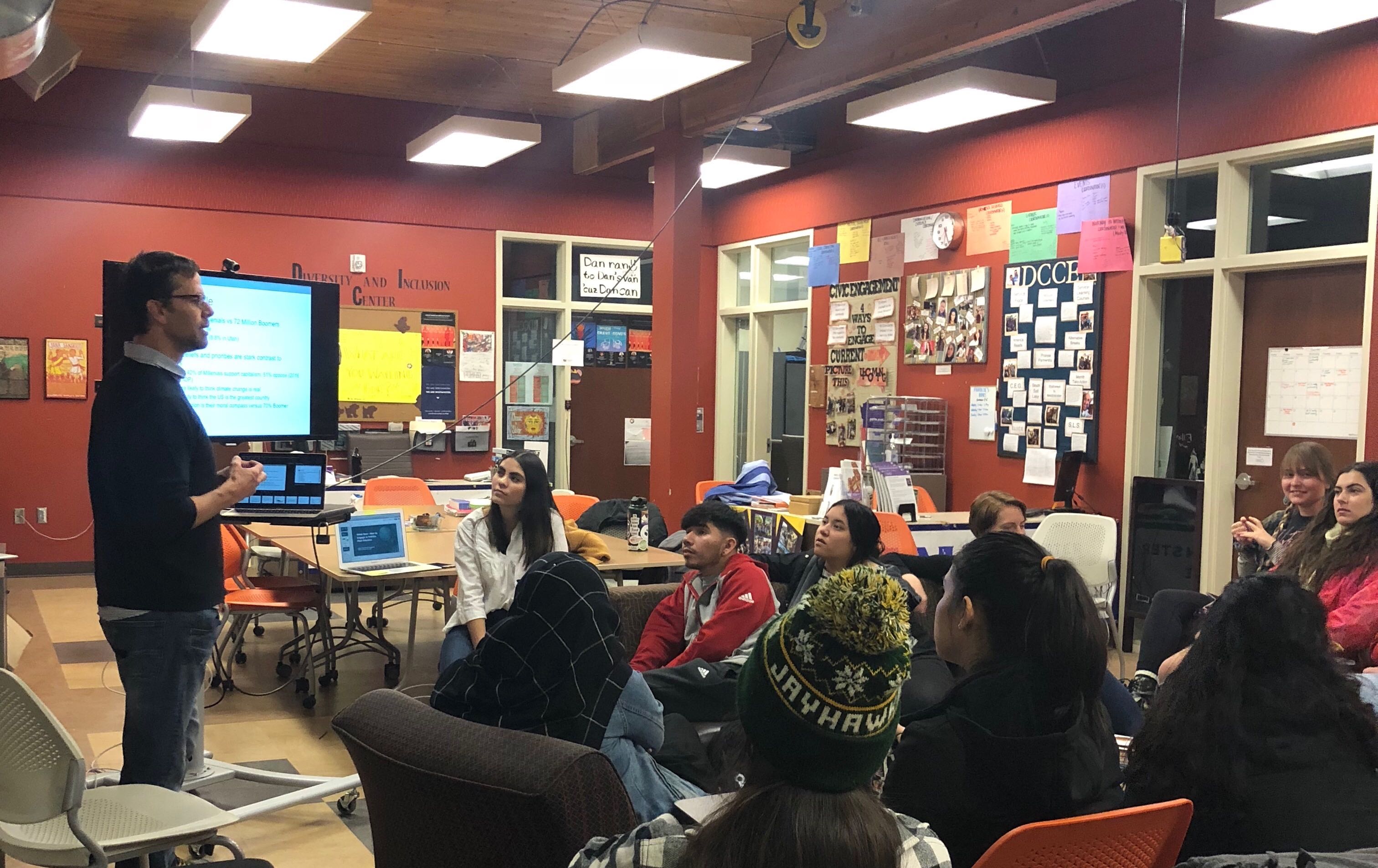 Guest speaker Greg Schultz discusses political involvement with Westminster College students in the Bassis Student Center on Nov. 13. Schultz talked about his experiences working in politics and shared information about how to stay politically engaged after the midterm election. (Photo by Oakley Matthews)

The midterm elections are over and many students at Westminster College may be unsure of what to do now that their ballots have been turned in.

In response, the political engagement coordinators for the Dumke Center for Civic Engagement hosted an event on Nov. 13 where students could learn how to be more politically involved after the elections. Eighteen students gathered in the Bassis Student Center to listen to guest speaker Greg Schultz and ask questions.

The idea for the event came from the political-engagement coordinators who said they noticed, last year, many students wanted to be politically involved but were not sure how to begin.

“We noticed a gap in programming from last year […] many people who were saying they were confused about politics in general, or that they were unsure on what to do after they vote,” said Lia Baez, a junior political science major and a political engagement coordinator. “We wanted to help people get engaged.”

Both Baez and Marley Dominguez, a sophomore justice studies major and political engagement coordinator for the Dumke Center, hosted the event to inform students how to be politically engaged in ways other than voting.

Dominguez said the goal of the event was to help students to “find their representatives and to be more informed as a whole.”

During the ‘What Now? How to Engage in Politics Post-election’ event, Dominguez covered three topics on how to be more engaged in politics for students. The topics were knowing who the recently elected officials are, getting in touch with local legislators/politicians and identifying then pursuing personally significant issues.

The presentation introduced students to websites like House.gov, which matches ZIP codes to congressional districts, and USA.gov, which shows how to to get in touch with federal, state, and local elected leaders. The last website, callyourrep.co, allows the user to create a script that can be shared through social media so those who view it can find contact information for members of Congress all in one place.

Guest speaker Greg Schultz also talked about his experiences working in politics and shared information about how students can get more involved.

“I think it is important for people to realize that almost every issue in their life or in the lives of the people they care about is political and that they can do something about those issues,” Baez said. 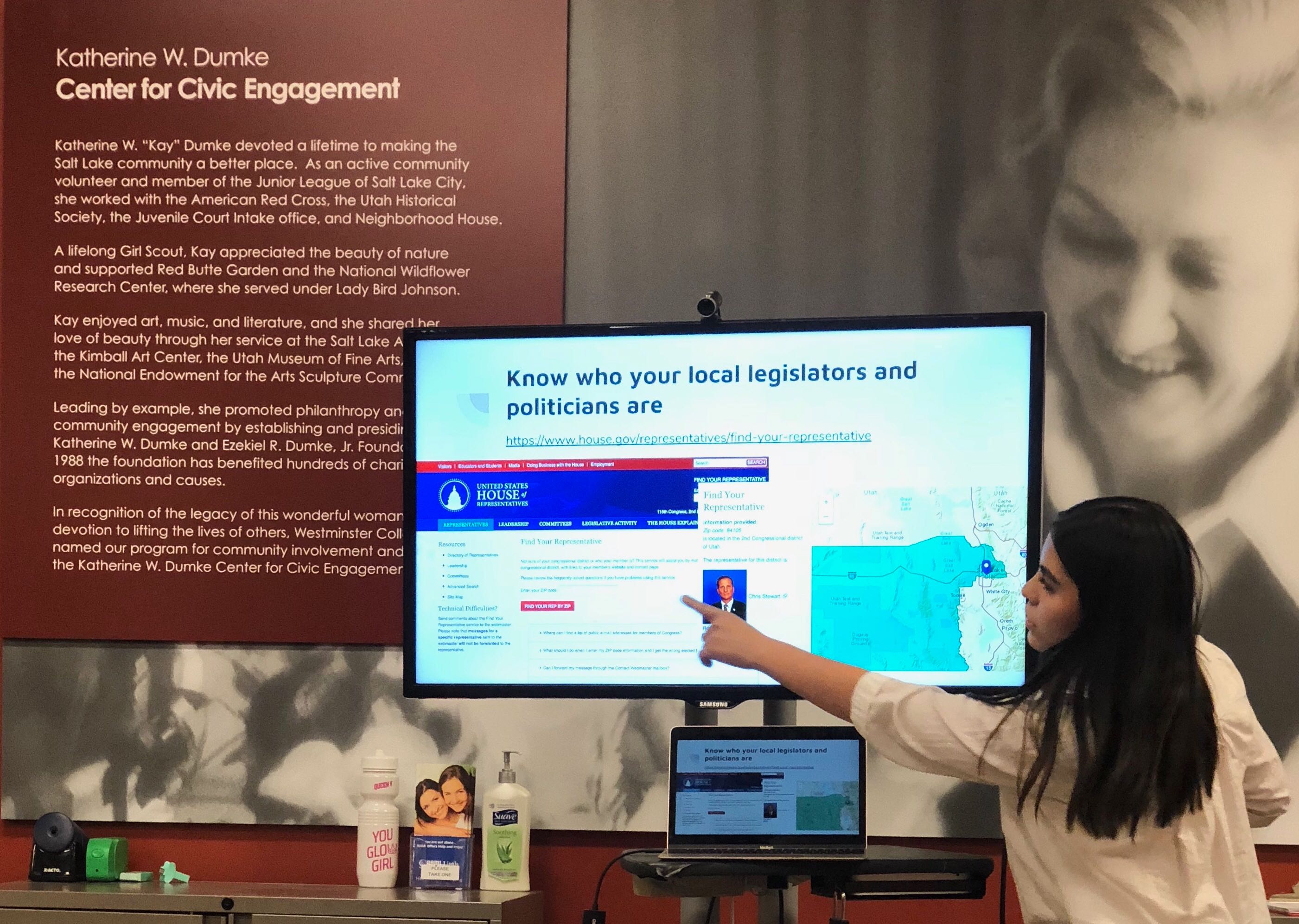 Questions Baez said she asks herself when political issues arise are how can she make change in the community now and what can she do other than vote in order to make a difference.

“I know people say like, ‘ugh politics,’ like its very inaccessible or it doesn’t concern me,” Baez said. “That second one really gets me because, literally, politics affects every single thing in our lives.”

First-year Ceci Rigby, an environmental science major, said she didn’t understand before the event just how politically involved you can be if you take the time to try.

“It makes you realize that individuals can actually make a difference in the political system,” Rigby said. “Especially here in Utah, since it is predominantly a conservative state, […] I think a lot of times people who don’t have those same views feel like they can’t voice their opinion.”

“I think a lot of people want to be politically active but don’t know how to get involved,” Vigil said. “Now I have all of these resources Marley and Lia provided so I can be involved and informed.”