Nearly 8,000 students, including some members of the Westminster College community, gathered with other protestors at the Utah State Capitol on Saturday for Salt Lake City’s March for Our Lives event. Most had the same goal in mind — to end gun violence.

But those protesters were met with opposition, as Second Amendment activists came together with backing from the Utah Gun Exchange, which sponsored an armored truck that drove around the protest area. Though the two groups had planned separate marches to Capitol Hill, they ran into each other there for a short period of time.

“I’m here today for the same reason everybody else is here: Call bullshit, say enough is enough,” said Anthony Giorgio, a senior at the Utah Academy for Math, Engineering and Science. “I was watching Lewis Black [a stand-up comedian] the other day, and he was saying, ‘I feel like this is the kids’ Vietnam moment, except [instead] of their parents sending them away to get killed, they’re sending them to school to get killed.’”

The protest began in the morning at West High School, where students and other protesters started the 1.2 mile march to Capitol Hill. Once they gathered at the Capitol, the students gave speeches and performed songs and slam poetry. 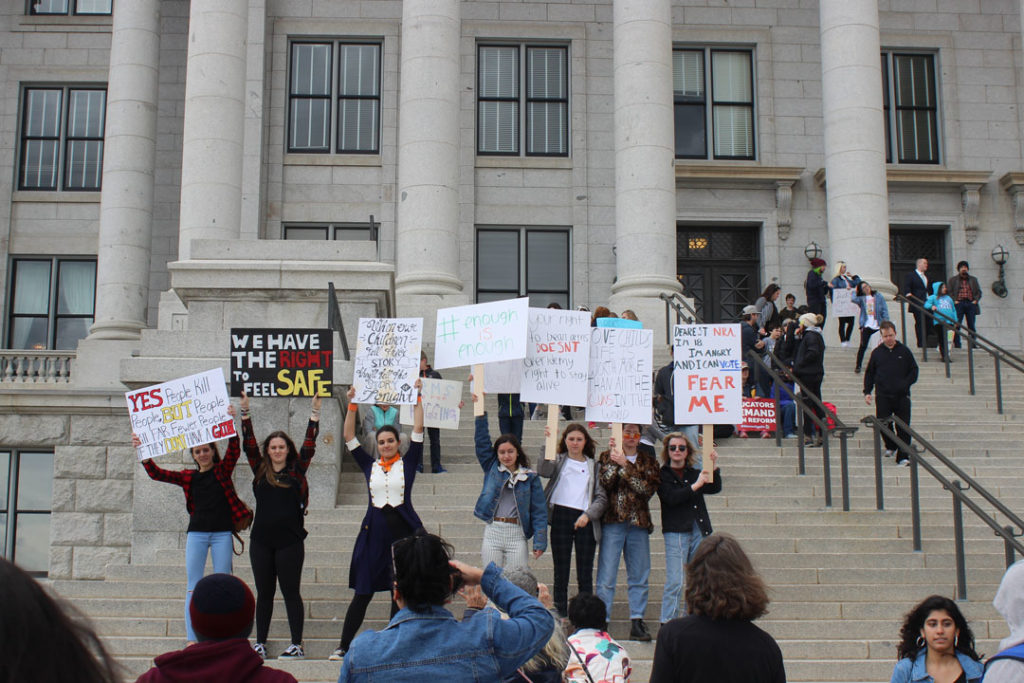 Protesters at the March for Our Lives hold signs on Saturday with phrases like #enoughisenough as they gathered together to march from West High School to Capitol Hill with the aim of ending gun violence. Signs and flags were the most popular way to show support at the march, which generated around 8,000 protesters, including a counter-protest. (Photo by Adrian Edwards)

“I just want to get my voice and everyone else’s voice heard,” said Katrina My Quyen Le, a senior at the Utah Academy for Math, Engineering and Science. “To really see that change and say enough is enough.”

David Koford, a senior at Davis High School, shared similar thoughts, noting that some guns are only appropriate in certain settings.

“Semi-automatic and automatic rifles and anything other than a weapon to secure your protection is only used for gun shows, you know, shooting ranges; there is no real necessity for hardcore guns,” he said. “I am adamantly opposed to people being able to get ahold of such dangerous weapons.”

In Utah, educators are already allowed to bring guns to most schools, per the state’s concealed carry weapons law. But Westminster, which is a private institution, does not permit weapons or allow students to bring or store any on campus. In interviews conducted in the weeks before the march, some students at the college said they believe other schools should follow suit.

“Weapons should not be allowed on campuses flat,” said Drew Fleming, a sophomore environmental studies major, though he noted there could be exceptions for a qualified police officer. “Yes they can defend someone, but guns are dangerous and can make many anxious.”

Certain schools in 11 different states — many in the midwest — respect concealed carry permits, which allow students and educators to bring firearms to school if they have the adequate certification.

But Aaron D. Smith, a sophomore biology and music major and the president of Westminster’s Republican Club, said he would advocate for guns on campuses where they are not currently allowed. 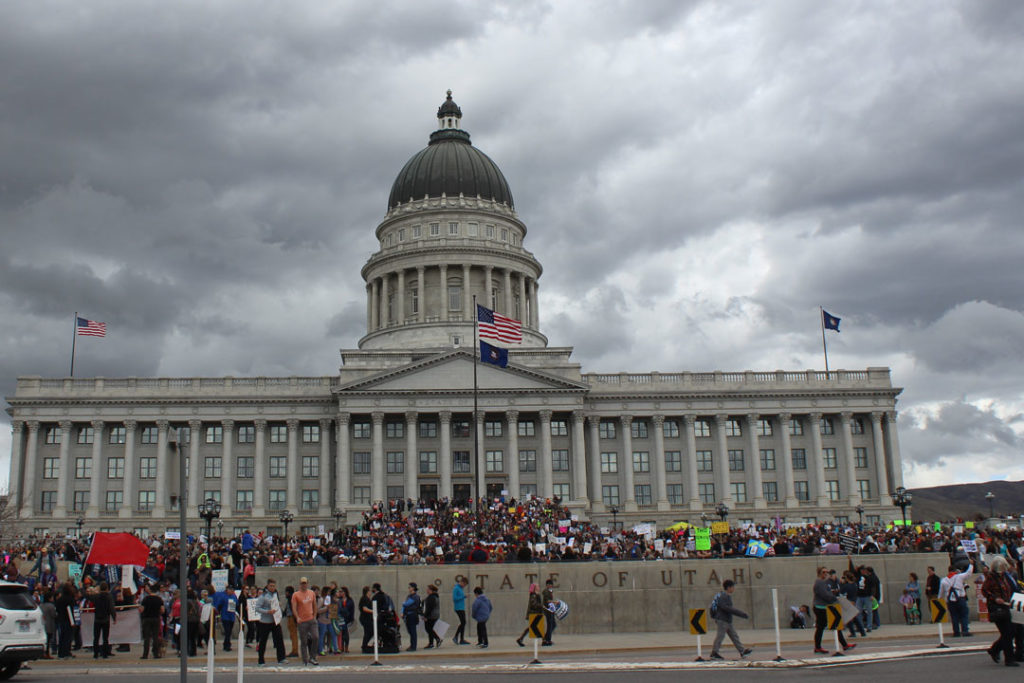 Around 8,000 people gathered at the Utah State Capitol on Saturday for the March for Our Lives. Though one group of protesters came together with the aim of ending gun violence, a group of counter-protesters advocated for their right to own a gun under the Second Amendment. (Photo by Adrian Edwards)

“In terms of protection, I believe we should protect our children like we protect our banks: There should be armed security guards at school,” he said. “Furthermore, teachers who are qualified and would like to have a weapon on them on public school grounds should be able to do so.”

Smith said he wouldn’t advocate that “every teacher should be forced to have a gun.” Instead, he said a teacher who is qualified, has a concealed carry permit and wishes to bring a weapon on campus should be allowed to.

“Until we as a country can decide what gun control means and looks like — both for the public and for schools — the best option for campuses is for police officers to be on-sight patrolling on campus,” she said. “The majority of students do not know how to effectively and safely handle a firearm, which puts both the student and gun-owner in danger. For now, we must leave the handling of firearms to professional officers.” 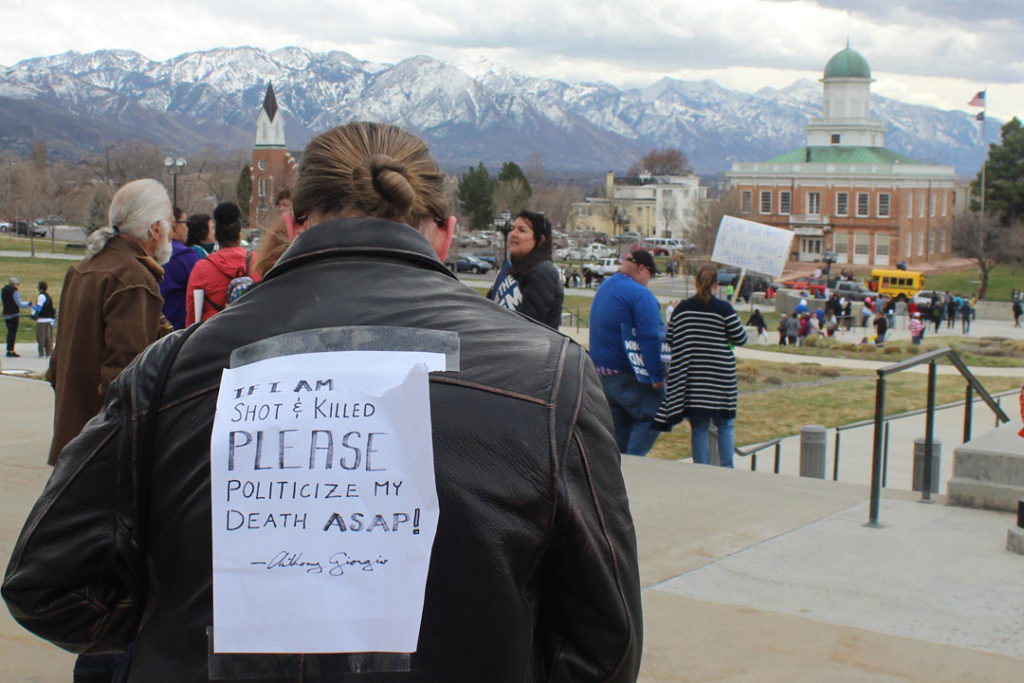 High school student Anthony Giorgio has a sign taped to his back that reads: “If I am shot and killed, please politicize my death ASAP.” Giorgio said he feels the need to add his voice to the national conversation on gun violence “on behalf of all of my peers and behalf of everybody who has already been shot.” (Photo by Adrian Edwards)

Wood said schools and campuses should be supplied with adequate protection in case of an emergency, like having trained police force members on sight.

Other students support keeping guns out of teachers’ hands, as well.

“You can always use more training with a gun,” said Ryan Cordes, a junior marketing major.

He indicated that arming teachers could deter a possible threat but didn’t think it was necessary in the long run. Rather, he said he was a proponent for gun education and noted that people are safer when they know more.

Wood also said she believes students need to become knowledgeable on the subject of gun control rather than just opinionated, noting her belief that the anti-gun lobby relies on emotion rather than logic to make its case to the general public.

“There is no ‘one-step-cure-all’ solution to this problem,” she said. “And we cannot and must not treat is as such.”