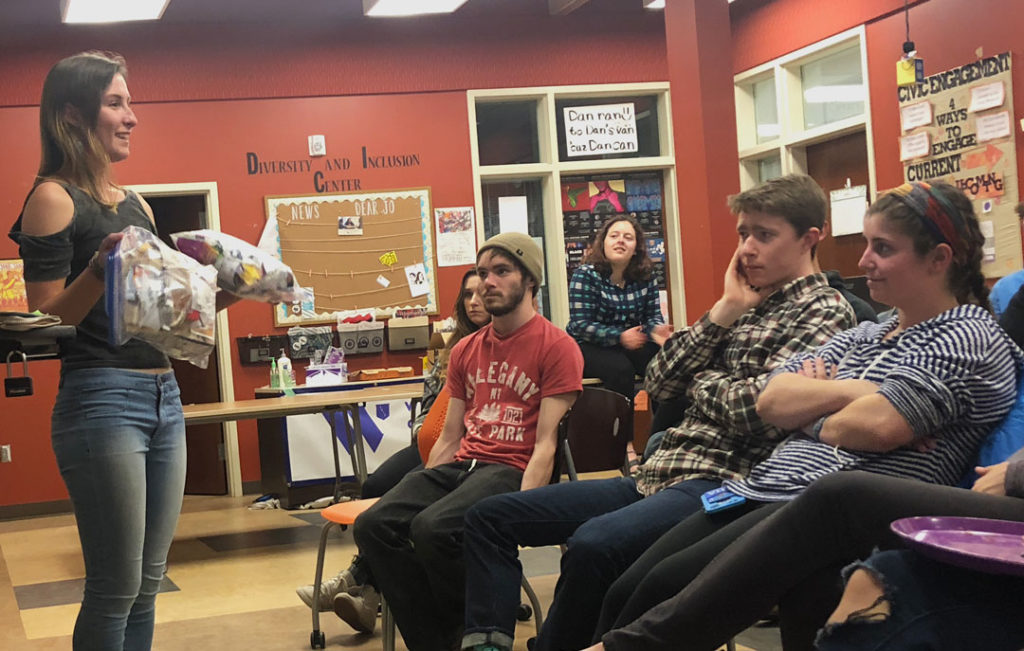 At the first #WasteFreeWestminster event on April 4, senior environmental studies major Rosanise Odell holds two one-gallon Ziplock bags of the trash she accumulated during a 30-day waste free challenge. Odell said she was surprised and pleased at the turnout for the first event, which drew a crowd of 75 students. (Photo by Sam Reynoso)

After realizing how many holes she had in her sweater, Westminster College student Rosanise Odell paired with Emilia Wint, a senior outdoor education and leadership major, to host a workshop on upcycling clothes.

Eventually, their ideas grew into a larger event: #WasteFreeWestminster. The first event of the three-part series drew a crowd of 75 students on April 4, where the pair presented about their journeys and strategies to becoming waste free.

“It was unexpected but super exciting,” said Odell, a senior environmental studies major, about the turnout at part one.

For the first event, Odell, Wint and the Environmental Center team, created waste free kits that included a mason jar and a stainless steel straw.

“We had kits for 24 folks and 12 additional made up,” Wint said, noting that they had to create vouchers for students who weren’t able to to claim one. “We would have been surprised to have gotten rid of those, but to double that number is kind of ridiculous.” 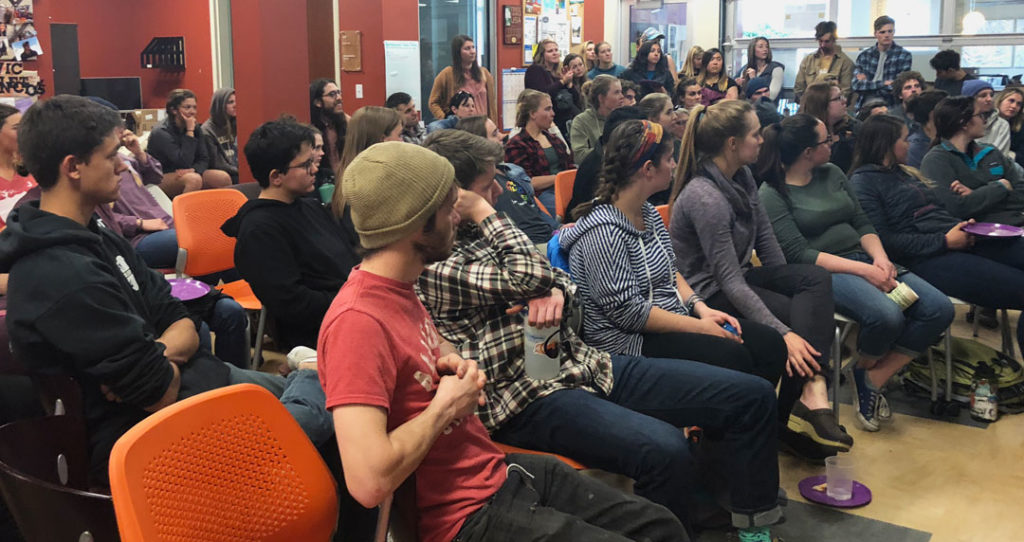 A crowd of 75 students flowed into the Environmental Center at Westminster College on April 4 to learn about how to eliminate waste. Rosanise Odell, a senior environmental studies major, and Emilia Wint, a senior outdoor education and leadership major, prepared 24 waste free kits, thinking they would have extras, but had to give out vouchers to redeem their kit at another #WasteFreeWestminster event. (Photo by Sam Reynoso)

Armed with strategies for how to save money and reduce waste, the pair aimed to empower students to attempt a waste-free lifestyle.

“As they were talking and realizing how much waste I use even today in my life, and thinking back, I can definitely make the choice to use less waste,” said Scout Invie, a junior English major.

Walker Sorlie, a senior computer science major, said he had unknowingly used a few of the strategies Wint and Odell presented but still learned new things to help help upkeep the lifestyle.

“I’ve been shopping at Trader Joe’s recently; it does kill me to get everything because it’s all in plastic bags,” Sorlie said. “I didn’t know anywhere else to go, so I guess WinCo. I’ve never been there, so if they have that much bulk, that’s definitely where I’m going to go.”

Throughout the event, students had the opportunity to ask questions and share their own ideas and strategies about how to become waste free.

“Don’t let perfect be the enemy of the good,” Wint said as a reminder to the audience that slowly becoming waste free is better than not doing anything at all.

#WasteFreeWestminster will explore the three R’s of eliminating waste: reduce, reuse and recycle. It is the first recipient of ASW’s Eco Warrior Grant. Part two of the series, reuse, took place on Wednesday and included a clothing exchange and a demonstration on how to upcycle clothes. Part three, recycle, will take place on April 18 and will include an art project and screen printing reusable bags.