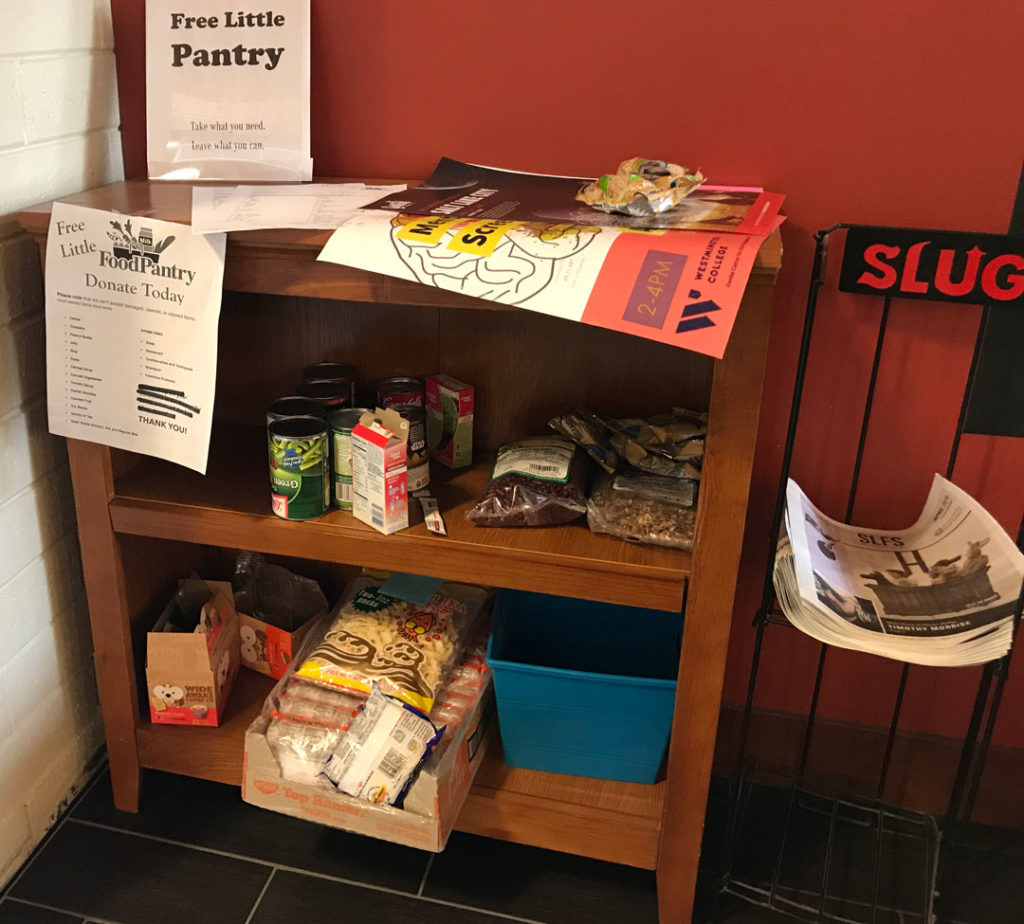 The food pantry in the Bassis Student Center, pictured here on April 8, allows students to take what they need and give what they can. Starting next school year, ASW will take over management of Westminster College’s food pantry and will work to improve awareness of the resource on campus. (Photo by Olivia Causse)

Near the main doors of the Bassis Student Center at Westminster College sits a small shelf filled with nonperishable food like beans, ramen and soup. On top of the shelf, a sign reads: “Free little pantry. Take what you need. Leave what you can.”

A group of faculty and staff originally started the food pantry, which provides food to students who may need it and offers others the opportunity to donate to their peers. But next year, ASW will take over that responsibility.

“We have a lot of students on campus that are either extremely low income and even some homeless students,” said Cassandra Yerkes, a senior arts administration major and the 2018 ASW Events president. “Part of the incentive [for ASW taking the food pantry over], I think, was to get some awareness for it, as well as get it somewhere where students can just, like, discreetly grab [food].”

Yerkes said one of the benefits of the pantry is that it’s accessible to students — a way to raise awareness and break stigma around hunger.

“It’s a great way to give back because like it’s a take some, give some — or, if you’re really in a pickle, then you can grab something and go,” she said.

Despite the efforts to raise awareness of the food pantry, many students, like senior international business major Emma Crosby, only found out about it recently.

“I think I [first] saw [the food pantry] a day or two ago actually,” Crosby said.

“I think it’s a cool idea,” Odell said. “I don’t think it’s marketed that well, so maybe letting people know it’s there [would be helpful].”

Yerkes said ASW Senate will make a better effort to advertise the pantry to students when it takes over next year.

“It’s not well-advertised enough to where people feel totally comfortable just going and grabbing [food],” she said. “Some kind of formal or informal advertisement [can] probably solve that.”