Heather McPhie Watanabe is used to being awake at odd hours. With a newborn baby, her schedule depends heavily on her daughter’s needs. But over the past few weeks, when she was awake at those odd hours Watanabe was following the Winter Olympics in Pyeongchang, South Korea, via live stream.

This was the first time since 2006 that Watanabe — a former Olympic mogul skier who graduated from Westminster College in 2016 — watched the games as a spectator. She said she was “absolutely glued” to the televised coverage. 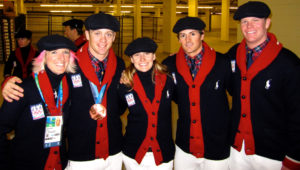 Though many people watch the Olympics for the thrill of seeing the world’s top athletes, Watanabe said her viewing experience as a former competitor was both exciting and strange.

“My biggest moments are when I watch an athlete just find out that they’re on the podium,” said Watanabe who finished 13th and 18th respectively in the last two Winter Olympics. “I almost always cry. I cry joy for them and I cry tears for me because I’ll never experience that.”

Watanabe is one of several U.S. Ski and Snowboard Association (USSA) team athletes and alums who have attended Westminster. The college has an official partnership with the USSA that fully covers the cost of tuition and allows these students the flexibility they need to earn a degree.

“Usually you watch the Olympics and you’re so far removed from it and it makes it less relatable,” said Kearney, a former mogul skier. “It was only three years ago — I guess four years ago — that I was competing at the Olympics myself.” 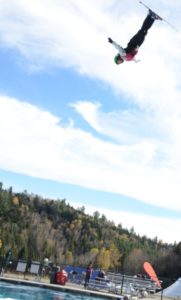 The college sent 18 athletes to compete in this year’s Olympic games, which lasted from Feb. 9 through Feb. 25, and two of those students brought home medals. Alex Ferreira won a silver medal in the men’s ski halfpipe and Brita Sigourney won a bronze in the women’s ski halfpipe.

“[I felt] a little bit of nostalgia,” said Chan, a senior public health major. “It’s exciting to see the people I used to jump with are still doing what they love to do […] even if I can’t do it anymore.”

Jess Breda, a senior neuroscience major and former competitive slopestyle skier, watched both of her roommates, Darian Stevens and Maggie Voisin, compete in the 2018 Winter Games. She said watching the games reminded her “how terrifying [competing] is and how much pressure it is.”

Breda, who retired in 2013 after an injury, said watching the games doesn’t make her miss competing because she has adjusted to being a full-time student.

“I have different goals now and different desires,” she said. “I really feel like the life I live doesn’t align with being in a start gate anymore.”

Other retired athletes agreed that while they may miss competing, they’ve enjoyed the transition toward school.

“It would be fun to be out there,” said Chan, a self-proclaimed adrenaline junkie. “But I’m doing different things now and my life is just different.” 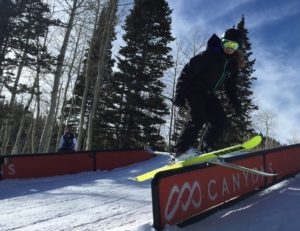 Jess Breda, a senior neuroscience major and former competitive slopestyle skier, hits a rail at Park City Mountain Resort in Park City, Utah in 2015. Breda watched both of her roommates compete in the 2018 Winter Olympics but said it doesn’t make her miss competing since she’s adjusted to being a full-time student. (Photo courtesy Jess Breda)

Watanabe said she also misses competing but is happy with her choices and doesn’t have any regrets. She said retiring on her own terms made a huge difference and Kearney agreed, also noting that she has channeled her competitiveness and focus into her school work.

“I think every Olympian wishes they could just go forever,” Kearney said. “Then you have to remind yourself of all the training and the exhausting work that goes in for four years in between, and that’s the part that I no longer have in me.”

Although she may have felt a little jealous of the athletes who competed, Kearney said it’s only because she knows how incredible the opportunity is. Even Watanabe, who never won a medal, said she isn’t bitter.

“I’ll have a sense of loss for something I never experienced, but I don’t have any sort of anger or resentment,” she said. “I think [the Olympics is] such a beautiful thing that brings the world together. I’m cheering for the pursuit of excellence and people who put themselves on the line, take chances and are willing to work so hard for a dream.”