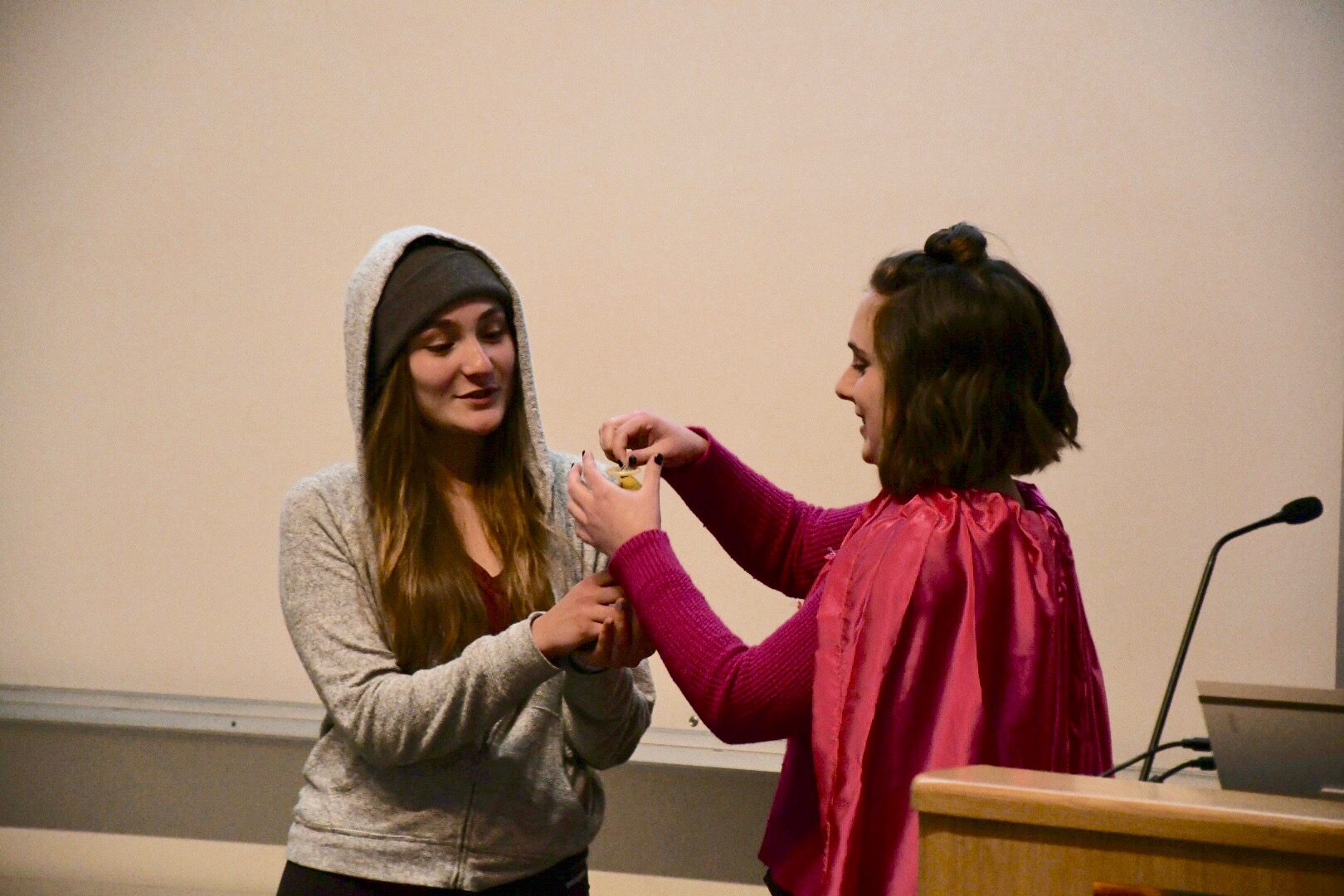 Sex educator and Vice President of ASW Maggie Regier demonstrates how to use a condom with a banana for Westminster College students at an inclusive Sex Ed Event on Nov. 1. Regier said being a sex educator is her dream job because it allows her to empower people. (Photo courtesy Maggie Regier)

The Vice President of ASW was criticized online for talking openly about sex during the Condom Fashion Show at Westminster College on Nov. 22.

The disapproving article was distributed by InfoWars, a far-right American conspiracy theory and fake news website founded in 1999, according to Wikipedia. The site is owned by Free Speech Systems, LLC.

“I was just excited that I pissed off someone for doing something I am proud of,” said Maggie Regier, sex educator and vice president of Associated Students of Westminster (ASW). “They hate planned parenthood, and everything associated with it. I just disagree with their perspective of events.”

Regier said she led a presentation about safe sex practices and sexual pleasure at the Condom Fashion Show on campus last month.

“My dream job is to be a sex educator,” Regier said. “I want to empower people, and I think sex education is a fantastic way to do that.”

The Condom Fashion Show is lead by the club Students United for Reproductive Freedom (SURF) who partner with the organization Planned Parenthood.

Ocean Candler, president of SURF at Westminster and a senior public and gender studies major, played a large role in the planning and production of the Condom Fashion Show.

There are about ten SURF clubs on campuses in Utah according to Candler. She has been president of the club for two years, but has been part of the club since her first year of college.

Candler said she invited Regier to present at the event and teach the audience about sexual health and safety.

“The point of the Condom Fashion Show, and the point of all of our events, is to destigmatize talking about sexual health,” Candler said. “It’s funny, it’s entertaining, it’s lighthearted, it’s inclusive.”

Candler said these attributes act as a mission statement for all of SURF’s events at Westminster because she said sex can be difficult or awkward to talk for many people.

“As we become new adults, it’s the first time we get to talk about sex,” Candler said. “We think it’s really important to create space to talk about it, ask questions and explore it in an appropriate way.”

Haddi Williams, a sophomore social work major, said though hosting an event like the Condom Fashion Show seems a little out of the ordinary, it makes talking about sex education more fun and easy.

“[The Condom Fashion Show] helps make talking about sex be a normal thing like it should [be] instead of a shush topic,” Williams said.

Regier said that there are many important things she would like to get across while educating people about sex.

“Engage with your friends about consent, talk to your kids about sex, and donate to Planned Parenthood,” Regier said. “Let your actions speak louder than your words.”

*The Forum values objective and unbiased reporting. To support these values, the editors have chosen not to link to the original story criticizing the Condom Fashion Show and Maggie Regier.

*Sources in this story have asked readers to not send internet traffic to the original article or its host website.

*A previous version of this article misidentified the event featured in the photograph. The photograph was taken at an inclusive sex ed event on Nov. 1