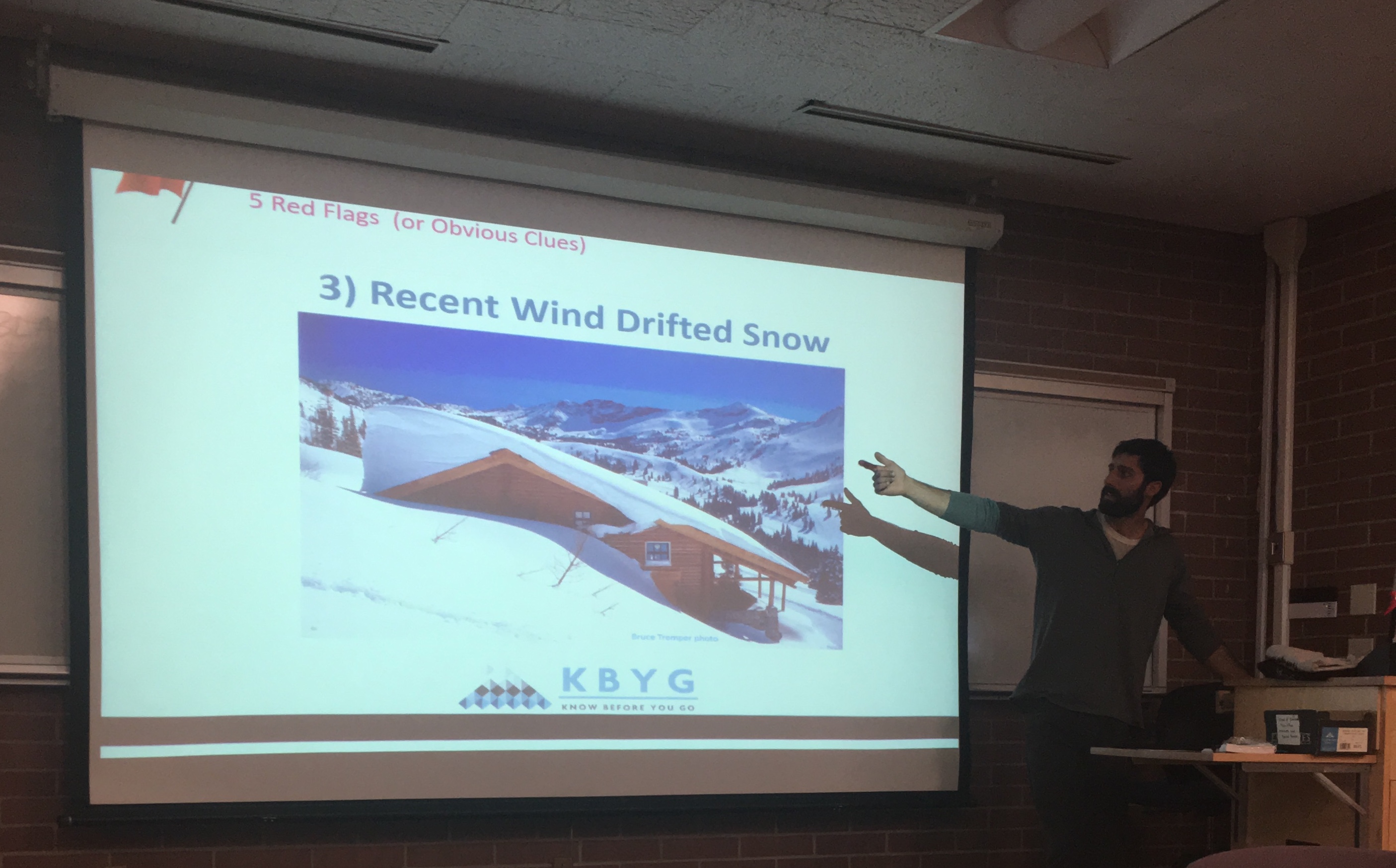 Winter season is arriving, and some Westminster College students have never skied backcountry terrain. That is why, on Nov. 15, Westminster Ski and Snowboard club hosted the Know Before You Go avalanche awareness clinic on campus.

Professional snowboarder Tony Pavlantos came to present. Pavlantos said he has had 12 friends die from avalanches, so he wants to educate the community on avalanche safety before they get out in the backcountry unprepared.

“The Know Before You Go is designed around hitting the masses, all people living in snow cultures,” Pavlantos said. “The take-home message [for all students] is to become educated and make sure you get gear, get the training, get the forecast, get the picture and get out of harm’s way.”

Pavlantos said avalanches occur on slopes steeper than 30 degrees and can affect anyone of any skill level. Avalanches can occur in loose snow, slab snow, wet snow and dry snow. A person skiing a slope in front of you can make the slope more unstable and more ready to slide in an avalanche.

However, according to Pavlantos, there is a systematic way to avoid avalanches.

Povlantos has a shop called Prival which sells shovels and probes you can wear on your body during every backcountry adventure.

Early season snowpack causes avalanches. Students get antsy and excited as the snowpack builds, and for some this will be the first winter where are exposed to potential avalanches.

According to the Know Before You Go website, 93 percent of avalanches are triggered by the victim or someone in the victim’s group.

The clinic was put together by Davis Lentz, a senior communication major and Westminster Ski and Snowboard club president, and Mike Mastromarino, a senior finance major and vice president of the club.

Lentz and Mastromarino have worked together at the Ski and Snowboard club for three years. They said they love the outdoor activities surrounding student life at Westminster, and they think it’s important for all students to be educated.

“Always be aware of the dangers [of avalanches], you can never do too much research,” Mastromarino said.

Lentz said it was convenient to have the clinic on campus, and said he didn’t know about avalanches when he was a first-year.

“Having [avalanche safety course] on campus makes it super convenient to just come with your friends,” Lentz said. “I know we went out in the backcountry as first-years and sophomores and we didn’t really know, but now being exposed to all these awesome programs helps us up our knowledge.”

Some students said they had already attended avalanche courses but that it was important to brush up on knowledge periodically.

“Even though I took an [avalanche safety course] it’s really good to refresh and recap on all those things because it’s really easy to forget,” said Sally Miller, a senior environmental studies major.

Mastromarino said it’s vital for people to educate themselves on snow safety and avalanche awareness.