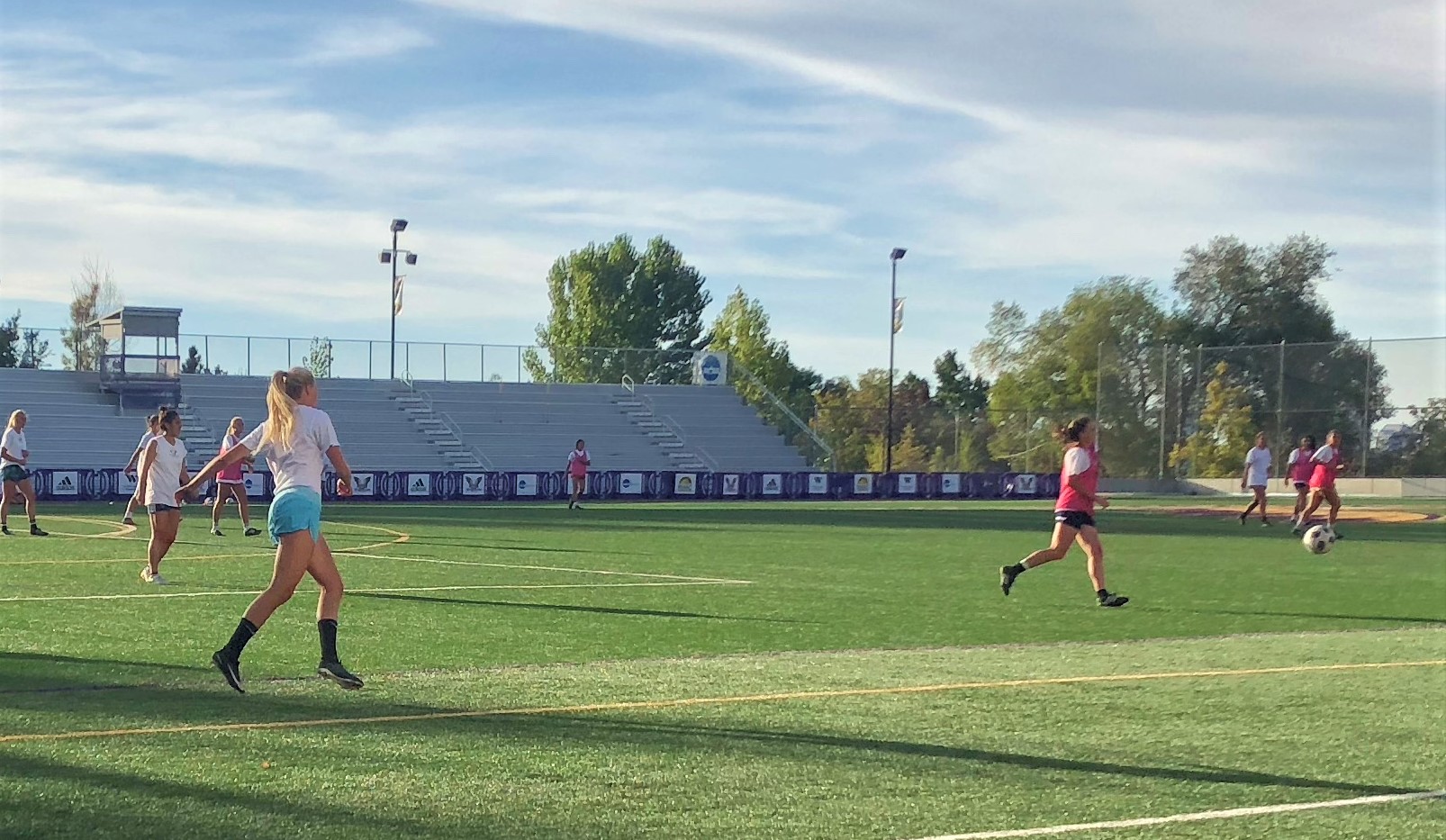 Westminster College’s women’s soccer team runs drills on Dumke Field on Sept. 26 in preparation for their home game on Sept. 28. At the last home game, women’s soccer defeated their in-state rival Dixie State University with a 1-0 win, however, the stands were less than 20 percent full. (Photo by Abi Breur)

While the Westminster College women’s soccer season is in full swing, attendance and participation at the games remains low amongst other students and the larger Sugar House community.

Westminster women’s soccer started their Rocky Mountain Athletic Conference (RMAC) on Sept. 16 against their in-state rivals, Dixie State University. The Griffins beat Dixie with a 1-0 win at Dumke Field in front of 234 attendees, according to the Westminster College Athletics website. Dumke Field has seating available for 1,200 attendants leaving 966 seats empty.

“I think the biggest thing [is], traditionally, athletics hasn’t [had] that big of a footprint on campus,” said Tony LeBlanc, head coach of the women’s soccer program for the past 12 years. “I think most students walk by events, maybe see some scores but they don’t really engage with it.”

LeBlanc, who earned the Unaffiliated Coach of the Year award in 2013 and 2014 from National Association of Intercollegiate Athletics (NAIA), said that having a huge crowd makes a huge difference for the team.

“I think most athletes are used to the fact that there isn’t going to be that many fans there,” LeBlanc said. “Since it has been something that hasn’t been that consistent that athletes are kind of like, ‘It is what it is. I am here to play. I don’t need that many fans. I would love more.’”

In 2012, the Griffins went to the NAIA national championship, the first time in the college’s history. Assistant Coach Justine Jones, who was a player at the time, said she remembers that game being the first time Dumke Field was filled.

“The boy’s soccer team, the lacrosse team, everyone was there,” Jones said. “I remember as a player looking over and having a huge crowd you were playing in front of, having the boys chanting against the other team makes you feel cooler and big league. There is no doubt or question in my mind that crowds play a part in players arousal levels and people’s emotions.”

Advertising the games as more of an event could bring in more students and the surrounding community, Jones said.

“If you make it an event, make it something families can come to, then you’ll get people to come,” Jones said. “I don’t feel like we are doing enough. We need to pull from ‘Sugarhood’ to get fans. Even the dumb giveaways, throw a shirt out to the first 25 people. Whatever it takes to get people there.”

Jones also said that the lack of stadium lights around the field play a part in people not coming since the lights allow teams to play at night.

“It’s Salt Lake City,” Jones said. “Until October you’re looking at 90 degrees at noon sitting in the sun and you’re asking 90-year-old grandma and grandpa to come out and sit in the heat.”

Having games at night under the lights also makes the games seem more exciting and “big league” Jones said.

“A lot of people don’t want to take time out of their Fridays and Saturdays to come watch [the games],” said Sims, a senior nursing major.

Sims said it brings up the energy at a game when other students come to watch.