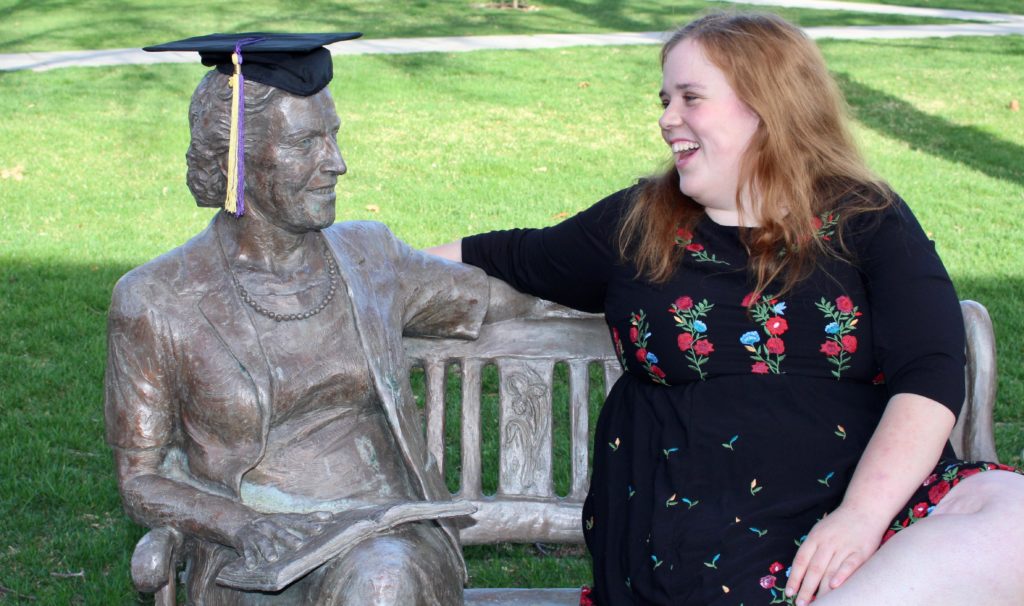 Cozy Huggins, a senior political science and justice studies major, poses for a graduation photo with Aunt Em, a statue on campus at Westminster College. Huggins, who was highly involved in student life and held many leadership roles, will serve as the 2018 student commencement speaker at graduation on May 12. (Photo courtesy Annette Donald)

This year, over 600 undergraduate students will earn their diplomas from Westminster College, representing 40 states and 36 countries and ranging in age from 20 to 66. But only one student will have the opportunity to speak on behalf of the class of 2018 during the commencement ceremony.

Cozy Huggins, a senior political science major, will speak at graduation on May 12 at the Maverik Center before heading to graduate school at Colorado State later this year to earn her master’s degree in student affairs and higher education.

Huggins was highly involved in student life and held many leadership roles as a student senator, clubs board member and presidential ambassador.

She was chosen because she showed a different side of herself in the audition, according to Oliver Anderson, the student development director.

Huggins sat down with The Forum to speak about her college experience and how Westminster shaped who she is today. This interview has been lightly edited for conciseness and clarity.

Q: What advice do you have for first-year college students?

A: Be prepared for it to suck. Like, be prepared to just go through some just awful moments but know that’s kinda what makes it worth it. It’s gonna suck, but you’re gonna love it. I don’t even recognize myself my first year, second year, third year and fourth year with how much I have changed. Be prepared for it to be uncomfortable and weird and scary and also awesome.

Q: What would you have done differently or wish you would have known when you started college?

A: I don’t think I have any regrets about my time here. My experience at Westminster was really defined by the work I did with the Office of Residence Life and that was really big for me to kinda get involved in a campus office. And that really kinda helped define and shape who I was — as well as my academic work with professors Leo Figueroa-Helland [political science], Giancarlo Panagia [justice studies]. As well as many others — Dr. Eileen Chanza-Torres [English] [and] Dr. Han Kim [public health]. They have all really inspired me and helped me on my journey. Everyone I have met I have been really inspired by and made me who I am today.

Q: What advice would you tell your younger self?

A: I would tell my younger self to not be so afraid of everything. Younger me was very afraid of coming out of the closet, driving on freeways, college, myself. You know, like, a lot of things. I think I am still afraid of those things, but the way that fear manifests itself in my life is different and I credit the people in my life who I really learned a lot from. And I also credit myself. Because, as Leslie Knope from Parks and Recreation says: ‘I am big enough to admit that I am inspired by myself.’ … Don’t be so afraid of everything, Cozy. It will be okay.

Q: Why do you think you were chosen to be the student commencement speaker?

Q: What is your speech about?

A: It is a surprise. But I think it is going to be about embracing the idea of fear and being vulnerable in the face of fear, as well as not being a bystander. And it will be about love and community and all of us and life.

Q: What was your favorite memory?

A: Getting to [have] Oliver Anderson as a mentor, and he has been a really good influence in my life. As well as Ata Siulua, who used to work in Residence Life. But just having someone who inspired me by the way he interacts with people and how he approaches situations with such grace, humility and humor. He showed me the importance of humor, always laughing and not taking myself too seriously. I hope I can carry that in my future.

Q: Why did you want to be a commencement speaker?

A: I wanted something to tie up my Westminster experience, I suppose. I liked the idea of going into a space where I was surrounded by people who know me, what I stand for and trust me to share that message on behalf of the class of 2018 because it is a big responsibility and I am excited to have that opportunity.

Q: You have an identical twin. Have you two ever done an identity swap?

A: We did, yeah. But it is really funny because my twin has really bad vision so we would get caught right away. I have 20/20 vision and she was like running into walls.